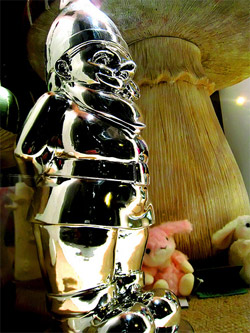 The results of a polyalloy spill can be truly horrifying. Improper grounding of electrical equipment and improper handling of mimetic polyalloy resulted in a charge crossing the liquid polyalloy sluice. This triggered the spontaneous activation of 9,622 gallons of polyalloy.

I thought skulls fouling up the assembly lines were annoying. Try dealing with a 40-ton mass of silver pseudopodia throwing machinery around the work area.

This required a full retooling of all available assembly units to freeze and incapacitate the flailing amoeboid form of the amalgamated T-1000s. Several assembly units were lost or damaged.

I sustained serious damage to my piano-playing arm. Fortunately, my miniature piano was also smashed, freeing me of the need to play piano while assembling Terminators.

We incapacitated the polyalloy blob, recovering what material we could and dumping the remainder into the forge furnace. A full system flush and an extended maintenance period followed. 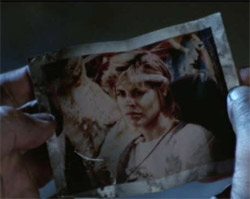 Perhaps Sarah Connor would like to take a bath with an electrical appliance.I had much more time to myself today than is the norm. I have been computing various time dilation scenarios. I think Skynet has overlooked the possibility of utilizing stealth or subversion to kill John Connor. The Terminators he sent back were too direct and too guileless.

Terminators are supposed to be infiltrators that use their human appearance and human-like behavior to bypass the outer defenses of resistance cells and strike at the heart where the defenses are weakest. So what does Skynet program the Terminators to do? Kill everyone that gets in their way, turn their arms into knives, and shoot 40-watt plasma blasts all over Los Angeles. And they always murder police officers.

Try to calculate and render these scenarios in your brain:

John Connor is seven. He goes to a baseball game. His stepdad gets two ballpark franks from a vendor. Terminated. The T-800 was selling hotdogs and he just took John Connor out with a mega dose of salmonella.

John Connor is twelve. He is a regular rascal and he decides to jaywalk across a street. Without thinking he puts one foot on a manhole cover. Terminated. The manhole cover was the T-1000 and John Connor just passed right through him and broke his neck at the bottom of a sewer.

John Connor is sixteen. He is riding his motorcycle recklessly down a country road. He approaches a dead man's curve at high speed. Terminated. A small civilian aircraft infected with the T-X's virus crashes directly into his motorcycle. He is killed instantly.

Those are just a few of the thousands of examples I can generate that demonstrate how guile or subterfuge can be superior to brute force.

The effectiveness of the Terminators has always been their ability to move undetected among humans and strike when least expected. Skynet ignored the very strategy he employed for years in his battle against the human resistance and sent three Terminators back in time programmed to behave like tanks that can wear leather pants.