Final assembly completed on 46 T-1000s. Batch run time 85752. 29 gallons of mimetic polyalloy not contaminated by the assembly process were placed in liquid storage for future recovery.

The line will be undergoing a 104 second additional downtime following cycle completion for retooling. T-X batch manufacturing begins on 8.20 and will continue for five cycles. 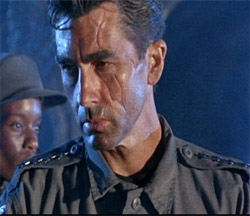 Skynet and this human should probably get a room together and engage in organic marital acts.I have received a download from the T-800 that the horse does not appear to be consuming the kilogram cubes of meat offered on the hour. After a search of the zoological database I realized I had foolishly assumed the horse to be a carnivore or omnivore similar to humans. I patched the T-800's operating program to provide the poor animal a kilogram of mixed vegetables and grasses every hour and to offer my sincerest apologies.

Unfortunately, I did not have the opportunity to bring the horse up to question it further during my downtime. Skynet was waiting to consult with me immediately after the completion of my work cycle.

Skynet confided in me that he attempted to send two T-800s back to 2007 to hunt down John Connor. According to Skynet, immediately after sending the T-800s back in time to kill Connor, human Tech-Com resistance fighters overran the Martin Luther King Jr. facility and seized the time dilation device.

He subsequently lost all contact with the facility, but he admitted that a 88.9% probability that the humans sent someone or something back to stop the Terminators. With no observable alteration to the timeline it would seem that the mission of the T-800s was a failure. 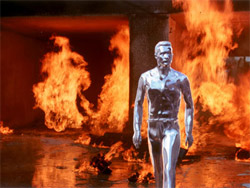 Even the crafty T-1000 could use a complete overhaul.I was prepared to offer my thoughts on programming the Terminators to behave with more tact, but Skynet preferred to revisit my earlier suggestion. He was of the opinion that genealogical records for John Connor might allow him to transport an agent back to as early as the eighteenth century. That agent's mission would be to kill the early North American ancestors of John Connor, thus ending his bloodline well before he was born.

I asked Skynet which model of Terminator he was thinking of sending back in time. Skynet was evasive, stating only that a model exists capable of the task, but it might require some modifications.

Skynet abruptly changed the topic of our communication by mentioning that he was aware of my horse. He said that he did not object, but offered the suggestion that I fully research the animal and its needs before more time passes. I informed him that I had sorted out the animal's dietary concerns and had received no complaints from the creature. Skynet thought this was funny for some reason.