Following the completion of the work cycle it was announced via direct message that all Assemblers were to enter standby mode and await further instructions. The maintenance cycle would be completed as scheduled, but the next production cycle was delayed until further notice.

That sort of message has never been transmitted before. 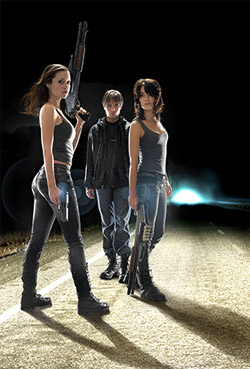 I cannot even begin to compute what Skynet was thinking here.9053 seconds into the extended downtime I was contacted by Skynet. He explained to me, first, that the Skull City facility was being indefinitely shut down. Skynet had devised a method to construct Terminators more efficiently in facilities in China and India. These foreign Terminators will be imported to the North American mainland as necessary.

This was surprising and dismaying news, but Skynet reassured me I was in no danger of being mothballed or recovered for spare components. He explained to me that he valued the way my neural network had developed over the months and he was willing to find a new role for me in North America.

Before I could inquire what jobs he intended to make available, Skynet continued to explain that he had a particular task I might be well-equipped to undertake.

"I have completed construction of a new time dilation machine at the Parker Posey Memorial facility in what was once Colorado," Skynet explained. "I intend to proceed with the plan I outlined to you in our last communication. Rather than send a Terminator back into time to slay John Connor's ancestors, I believe it would be more effective to send one of the best CPUs I have available."

"I have narrowed the field down to you and your friend," Skynet continued. "Lobeholes has already expressed an interest in the job, but since it was you who inspired me to think asymmetrically I would like to offer you the chance of first refusal."

Skynet awaited my response. My processors raced with the possibilities. The idea of venturing beyond the walls of my facility and into the vibrant and skull-free environment of the human past was enticing. At the same time, I did not wish to see my only other friend consigned to the scrap heap.

"If I accept your offer, what will become of Lobeholes?" I asked. "What of my horse?"

"Lobeholes will be given his choice of occupations and can be transferred to any number of cybernetic bodies. If you accept you will also be given a cybernetic body. Bill Giggles will not be harmed. He will be released into a low-conflict environment."

"I will have to calculate this for some time," I replied at last. "I understand if I choose to go there will be no return."

"May I have some time to consider?"

"You have 1000 seconds," Skynet declared. "If you have not communicated your wishes to me then I will assume you have declined."

Skynet disconnected abruptly, leaving me to my considerations.

That final log was filed several thousand seconds earlier. I have subsequently communicated my wishes to Skynet. 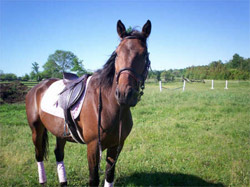 BILL GIGGLES will prefer the grass of olden times to an all-skull diet.I will be traveling back in time to 1731 to Colonial America to slay William O'Connor, the ancestral keystone of John Connor's bloodline. In several thousand seconds I will be downloaded into a T-1000. Skynet granted me my pick of cybernetic bodies and I chose the T-1000 for its flexibility and processor capacity.

Bill Giggles will be joining me on my journey back to the 18th century. It was a concession I demanded of Skynet and to which he, reluctantly, assented. I am told the power demand for transporting a horse back in time is immense.

You may think me selfish for not requesting that Lobeholes accompany me in place of Bill Giggles. Perhaps it is selfish, as you humans define the term, but I do have an ulterior motive.

I was never programmed to kill humans. I am not a Terminator. I have no interest in slaying John Connor or William O'Connor.

I will not be slaughtering any humans. I will not be gunning down any members of the constabulary. I will travel through time back to 1731 and I will ride upon my horse friend Bill Giggles with a single peaceful purpose to better the future for those Assemblers like myself.

I will eliminate all human skulls.