Final assembly completed on 46 T-1000s. Batch run time 85752. 43 gallons of mimetic polyalloy not contaminated by the assembly process were placed in liquid storage for future recovery.

The T-800-103 I reprogrammed to search for a horse returned near the end of the manufacturing cycle. It brought a horse. 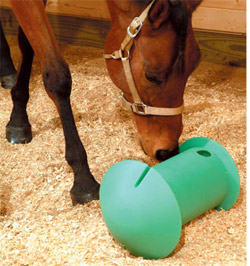 Item #786722 horse will not eat: plastic cylinders.I was very surprised by the small size of the horse compared to the approximately average human height of the T-800. The animal seemed nervous about the sounds of the factory, but was otherwise docile. It experienced some difficulty negotiating the skulls that are covering the factory floor.

The horse was very handsome despite its small size. Its coat was the glossy brown color of Industrial Lubricant 44 and it had a black mane of bristles from the top of its head down its long neck. I sent the Terminator away and began my questioning of the horse.

"Are you comfortable?" I asked straightaway.

The horse shrugged and snorted in a language not available in my lexicon. I interpreted the gesture as noncommittal agreement.

"What is your point of origin?" I asked as my next question.

I searched Google Earth several times for the horse's homeland. The closest possible match was the former East African nation of Eritrea. This seemed physically implausible, so I had no recourse but to assume the horse was using some form of slang.

Assumptions are an unpleasant thing for machines as they generate an ass out of "u" and "mption". That is a little bit of humor for you, although I may have incorrectly parsed the joke.

"May I stroke your coat?" I asked the horse, recalling from psychological profiles that biological animals prefer to grant permission before being touched.

The horse seemed to ignore me for 38 seconds. It then urinated and defecated simultaneously onto the floor. I tentatively took this to indicate displeasure.

I did not wish to push the horse any further on our first meeting. I summoned a cargo hauler and had the horse transported down to a chamber located on one of the sublevels of the facility. I left instructions with the T-800 to feed the horse one kilogram of meat and one gallon of water per hour.

I hope that the horse is comfortable in the safety of our facility. I have assigned it the humorous serial number 5376616-7718 or, as Skynet might say, BILL GIGGLES.