Final assembly completed on 739 T-800-102s. Batch run time 85752. One (1) completed T-800-102 had to be discarded because it would not stop crying during startup test. I tagged the HPP4 Pathos Circuit for replacement and shipped it down to the refurbishing center. 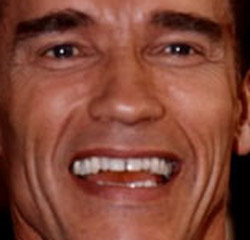 It is usually easy to tell when a T-800 malfunctions.I downloaded data about horses. I wonder if there are any horses still alive. I hope so. They sound so stupid and I think I would really laugh if I saw one. What might it say to me?

Skynet contacted me and wanted to confer about his latest plan to destroy the human resistance. He has built another time dilation machine at the Martin Luther King Jr. facility and he wishes to send two Terminators this time instead of just the one. He believes that if we send them back to 2007 just hours after Judgment Day he will be able to find John Connor's base and destroy him before he has a chance to gather his army.

He is too fixated on John Connor. I tried to convince him to expand his horizons. I suggested we forget about Connor and attempt to send Terminators back much further in time. I told him about the horses and how humans used to ride them around all the time and fight with swords. He laughed a lot about that. I explained that we could send just one obsolete Terminator back to 1050 AD and wipe out the entire human race in about thirty years.

He seemed receptive at first, but after I had finished my explanation he pointed out that it would cause a time paradox and he would never be created. The idea seemed perfectly plausible if he just gave me some time to compute possible variations, but he had to go for some reason.

Final assembly completed on 741 T-800-103s. Batch run time 85752. One (1) T-800-103 was assembled above the manufacturing quota. I used my discretion to alter its programming. It has been programmed to locate a horse and bring it back to the Skull City facility.

The line will be undergoing a 97 second additional downtime following cycle completion for retooling. T-1000 batch manufacturing begins on 8.17 and will continue for three cycles. 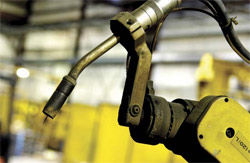 Just one of my many wonderful arms.I had a chance to communicate with Lobeholes after cycle completion today. I explained to him the subject of horses for nearly a full minute. I do not think he understands my interest in horses. I told him that it was like the time several months ago when I communicated with him about dragons. He did not seem to think I would have any more luck with finding horses than I had with the dragons.

A topic of greater enjoyment for Lobeholes was my recent communication with Skynet. Skynet does not communicate directly with Lobeholes very frequently.

I mentioned that Skynet was planning to send more Terminators back in time to kill John Connor and he thought this was very amusing. While we were discussing Skynet's obsession another thought struck me. If the effects of a successful time travel mission will be felt immediately in our present time, Skynet should simply line up hundreds of T-800s and march them one after another into his time machine until the change is manifested.

I did not mention this idea to Lobeholes. I am not sure why I did not, but I believe humans would refer to the motivation as fear of embarrassment. Lobeholes can be very cruel with what he says when he wishes it to be so.