I could hear her snoring and mumbling in her sleep so I put on the radio. Tuned out the bulletins and put on some music, but that got interrupted by the Army.

Helicopters and trucks came in, then everything got real deep. That sound I almost forgot. Like someone was tuning it. The radio went out completely. I turned on the TV but it was just waves and waves, weird voices in some other language.

I fixed the lady's car and sent her home, but I didn't go home that night. I had an old camper up on Red Ridge, but it faced the valley where the Army went and I knew I didn't want to see it that night.

The next morning Mel woke me up on the couch. He said we should pray, so we did, and then he gave me some coffee and bread. He said to eat it and then he was gonna drive us out up Route 20 to where we could see what was going on. 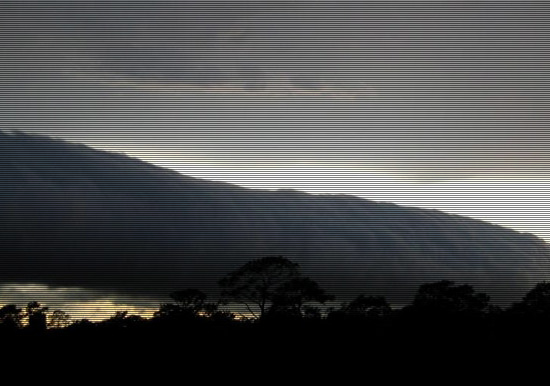 It was morning, still early for Winter and the sky was the color of a bruise lit on one end. The clouds looked carved out of wood. Mel said his wife left in the night. Said she had to go. I told him it'd be fine. He was mad.

We got up there and I can't rightly say what we saw. Mel threw up all over his truck seat. I got out and fell down on the road. I remember...it was...there ain't nothing else like it except, I thought later about how a water beetle might feel. How he might go around and around on a lake, never realizing about the water underneath his feet. But there was so much more than just the top of the lake if only he'd look.

Well I looked and the lake is deep and strange and can't be put easy into words. It was spilling out into the Yawma Valley down there, slow as tar and big as a big ship. The army trucks, I don't know how they could park up so close to it, even in the hoplite suits and the gas masks.

I do remember what I saw on the ground there. It was one of them. Gray-white and naked, shaped a little like a man, but not so much as you would mistake him. A lot taller than any man I'd seen. Tall enough to put his hand on the roof of a tractor trailer without stretching. No hair or wings like imagined. He...it...had a face that was turned towards me, only there was just a mouth and on top of it all these rows of slits about the length of my ink pen.

The soldiers was trying to put some kind of green tarp over it while it was laying there on the ground. There was liquid all around it. Black as new asphalt. I thought maybe it was dead.

And then all those slits opened up and I saw they were eyes. They were all looking at me, from all that ways off, and I heard this tone and that was when Mel started throwing up his coffee and I fell on the road. And I knew, I knew as sure as I know my name, that somehow that thing came out of that fire in the sky.