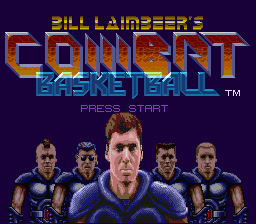 At a Glance: Boy I sure did miss the ROM Pit! After spending a week out-of-action due to a series of complex issues that involve my laptop being halfway across the state and projectile vomitting, nothing warms the cockles of my heart like a cup of hot cocoa, a purring tabby cat, and a steaming pile of early '90s virtua-schlock. So I now present Bill Laimbeer's Combat Basketball, which Lowtax has everything short of planting a land mine in my chest cavity to get me to play. I'm very excited to bring you a review of this title, mainly because I'd like to live to see my next birthday.
Platform: Super Nintendo Entertainment System, 1991
Know a terrible ROM? Email me! 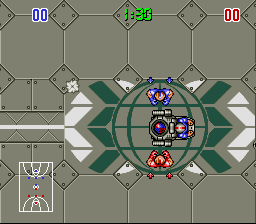 You can tell it's extreme because there's some kind of robot thing serving the ball and also they were too extreme to draw a ref!!!!up with pumpin' IN-YOUR-FACE music and a ballin' group of people you're clearly supposed to think are EXTREME but are in fact the world's least extreme looking white people in the history of extremities, including Martha Stewart's gangrenous hangnail. Anyway it takes place in a post-apocalyptic world, which I can tell because I've been spotting morons smearing feces over such "deep ideas" since 11th grade, when Kyle Larson wrote "BIG BROTHER IS WATCHING YOU" on every chalkboard he could find in response to a ban on miniskirts. Anyway instead of collecting resources or racing robot cars, everyone is going bonershit over basketball. EXTREME basketball!

Control Scheme: I'm always reluctant to review SNES games. Because my parents were monsters who thought one $200 payment was enough to secure their daughter's virginity until her 30s, I never owned an SNES, so my sputtering child mind was unable to cope with its traumatizing number of buttons. Whenever I played SNES at my friends houses', one wrong flick of a shoulder button -what kind of crackhead develops a shoulder button?!- seemed to send Mario into fits of suicide-jumping agony. Fifteen years later I've mastered MMO interfaces as complicated as aa panel that systematically tears apart everything you've come to love in lifemy fragile psyche, but the thought of buttons labeled "X" or "Y" still haunts me. My Nintendo DS makes me nervous. 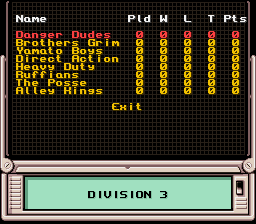 Fortunately Combat Basketball eases my post traumatic stress disorder because aside from the D-Pad, it only uses one button, ever. That's right kids, your whole life is made of limitless opportunities thanks to.. B! B + Dpad while holding the ball lets you pass! B + Dpad without the ball? Block! Unless you are the type of person who, say, routinely defends the PS3's pricing, you will realize that this makes controlling your pseudo-Orwellian basket-imps about as reliable as predicting a console war.

Gameplay: Beyond "space basketball with one button," what the hell else can you say? You're allowed to pick a difficulty level, but as the computer assumes you have the Christ-like ability to multiply pressing one button into an actual video game, you'll always get your ass kicked. On the plus side, Tournament Mode lets you name your teams, which is fun for about five minutes until you realize you're a pathetic sack of shit that just enjoyed part of Bill Laimbeer's Combat Basketball.

Graphics: Aside from some giggle-worthy attempts at depth, the whole thing looks like a kid's sidewalk chalk drawing after he's pissed all over it. If you're going to have all of your dudes look exactly the same, you could at least put a little more effort into THAT ONE SPRITE. On the plus side, the color scheme accurately portrays an apocalyptic world where fun and good taste have been outlawed.

Fun: I avoid sports video games because if I wanted to play a rousing, red-blooded game of sports (I don't), I'd 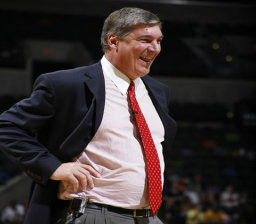 Extremely extreme.go outside and play some actual sports. Despite being inactive enough to have thighs that resemble an aged aunt of Jabba the Hutt, I can think of a number sports I'd enjoy more than this game, such as Esophagus Welding, Synchronized Eyeball Sewing, and the Hundred Meter Paint Thinner Swig. Or maybe I could chain myself down in a pit full of Rancors somewhere, bashing my face against a button in the floor for a few hours!

Defining Moment Back in the day, there was a group of kids in my neighborhood who loved to play basketball more than anything else. Ravenous for their acceptance, I vowed to become a hoop-shootin' goddess. Unfortunately I was six years old and approximately three feet tall, so my strategy was to squint my eyes and chuck the ball in the general direction of the basket, namely "up." But the shooting mechanic in Combat Basketball is less reliable than that, as B without the D-pad is shoot, meaning there is no way to aim. Even getting close to the basket doesn't improve your odds. So "practicing" Combat Basketball long enough to actually win a tournament is like being lovingly "dedicated" to a gambling addiction, only your friends will be less likely to respect you.