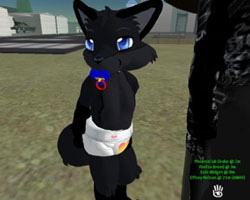 We created the Second Life Safari because when the mainstream media covers Second Life they dance about madly and act as if an economically active virtual world is the greatest thing to happen to anyone ever. Publications like the New York Times ignore the rank, semen-stained underbelly of Second Life, perhaps because so much of it is unprintable.

In any case, they miss a lot of journalistic windfalls. They're can't talk about the truly juicy stuff that is going on in Second Life, which we love to report on!

But not everyone likes what we do. Take BabyWolfie, who didn't appreciate our visit to BabyTiger's den, which we chronicled in the last update.

Last week, BabyWolfie and I had a "Seriouse" chat about Second Life, "ISP Rights", and what it takes to slay a dragon. He's a darling little diaper wearing furry. The best thing about him, though, is that he's not just any old yiffing fucktard. He's a Second Life employee. Specifically, a "Live Instructor", who gets paid to teach newbies to script. They must be desperate if they're hiring someone with the identity--and writing comprehension--of a baby animal. Intrigued yet? Read on!

MY STARS! I was downing business and mocking creativity! I had infringed upon the privacy and copyright of others! At least, that's what I got after I ran this through my Babelfish "Idiot-to-English" translator. But even though the words made [slightly more] sense, I couldn't figure out exactly how I had infringed upon privacy by walking through a virtual, uninhabited mansion whose doors were always left open. The only polite thing to do, of course, was to email BabyWolfie back and figure out exactly what "inconivtions" he had caused me.

Man oh man, what I wouldn't give for a chance to slay a dragon in the Matrix! I would do a good job of it too, because unlike Keanu Reeves I don't think my acting would consist of simply going "woah" whenever anything mildly unexpected happened. I think I'd go for the more "HOLY FUCKING SHIT AWW HELL NAW" route. Some people might call it overstated and hyperbolic. Do you know what those people are? Baby eating Holocaust deniers.