I just want to find the people who did this to me and make them pay before another innocent person gets hurt.

A helicopter passes below my rooftop vantage point. I pick up an industrial air conditioning unit and heave it at the chopper, missing it entirely. Brakes lock and the injured scream as a packed intersection somewhere below is thrown into chaos. 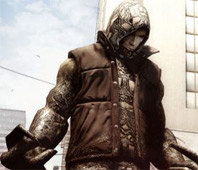 The helicopter continues on its way, but I pursue. Several blocks and three air conditioners later, I change tactics, gliding through the air and kicking the helicopter to death.

For the better part of an hour, I scour the city for helicopters.

I'm Alex Mercer, and they did this to me. I don't have many memories. I just know that they must be stopped. Now.

I run up the face of the largest building in the city, leap backwards, and let myself fall. The wind assaults me with the force of a tidal wave on a storm-battered shore. My hoodie never wavers. My impact cracks the asphalt in a shockwave that spreads twenty feet in every direction. Muscle and metal alike are ripped apart within this circle, but I am unharmed.

After punching a taxi, I sprint up the way I came to do it all over again. If the inhabitants of New York are smart, they will stay far away from this intersection for the next hour.

All I want is to put an end to the sadistic people that wronged me. I think my sister is in danger.

Now in Central Park, I turn my right arm into a shield made of guts. Sticking to the sidewalks, I plow into a mass of humanity at 100 miles per hour, never slowing in the slightest even as scores of civilians connect with my gut shield with enough force to send their lifeless bodies sprawling through the air.

When the sidewalk comes to an end before a stone wall, I turn around and do it all over again.

I don't think anyone can understand what I'm going through. They did some kind of experiment on me. They had no right. This is about justice.

Disguising myself as a soldier, I slip into a squadron of U.S. Marines unnoticed.

"There!" I bellow, pointing a finger at an old woman walking by. "That's Mercer, he's disguised!"

The soldiers open fire. When the body is inspected, I shrug, then point at a man in a business suit.

Still in disguise, in plain view of the soldiers, I run up the side of a building and fall ten stories. After I land, I point at another old woman, identical to the first victim.

I run up the wall again as they unload their rifles on another innocent person, then jump off and glide toward a timed race that I see in the distance.

I'm Alex Mercer. All I want is justice.

I stand on a bridge, holding a delivery truck over my head. Three seconds later it's a hundred yards away, sailing through the air over the harbor on an upward trajectory. I grab the first pedestrian I see and throw him at the airborne truck.

They are so far away from my position that they are little more than tiny specks on the horizon. Even so, I'm pretty sure I see them collide.

I'm getting closer to my ultimate goal. I can feel it.

The Sims 3
Still takes fifteen minutes to piss, still entices you with the promise of a dynamic life simulator that turns out to be a series of optional grinding mini-games. 7/10

Necrovision
A perfectly good name for the world's first snuff film Pay-Per-View channel is wasted on a mediocre FPS. 5/10

Damnation
If you ask someone about Damnation they'll tell you "It's certainly no Necrovision", and in the creeping silence that follows you will both wonder where your lives went so horribly wrong. 3/10

Prototype
If you're slowing down long enough to find something to bitch about, you're not playing the right game. 9/10

Red Faction: Guerrilla
(A 12-hour explosion drowns out the review) 8/10

Help Wanted: 50 Wacky Jobs!
Jobs #1-49: figure out when the Wii's software will live up to the platform's potential, job #50: tie a rope around your neck and genetalia and kill yourself. 5/10