I'M SO PISSED. THIS WOMAN I WAS FUCKING ONLINE SENT ME HER NUDE PICTURE SHE'S PRETTY HOT BUT THE SECOND ONE DIDN'T WORK AND IT MADE MY COMPUTER RESTART I GOTTA TAKE IT TO COMP USA TO HAVE IT FIXED AND I WONT BE ABLE TO HAVE SEX WITH HER ONLINE.

I think we should ban all books that aren't about drywalling techinques.

Due to the protest of many parents at the amount of magic featured in the Harry Potter films, the films have been edited and extensively reshot. The films are now about a rag tag kid's hockey team that pull together to win the championship. It stars the forgotten brother of Charlie Sheen and has a lot of heart. FLYING V!

If you look hard enough during the last scene in Pinnochio you can find a really nice recipe for fruit salad.

I run Linux. It doesn't crash or yell at me or call me names. Every night Linux reads me a bedtime story and tucks me in. I love you Linux.

"Gavino" presents this edgy photoshop for your viewing pleasure. See he has made light of the stereotype that Vietnanese eat dog meat by poorly placing an image of a dog onto another image of Vietnamese marketplace. What a funny guy! 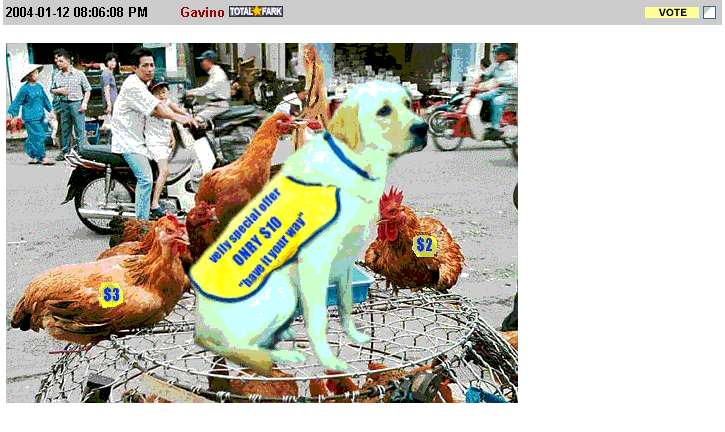 Ugh, it's those damn furries again.

I just saved a bunch of money on car insurance.