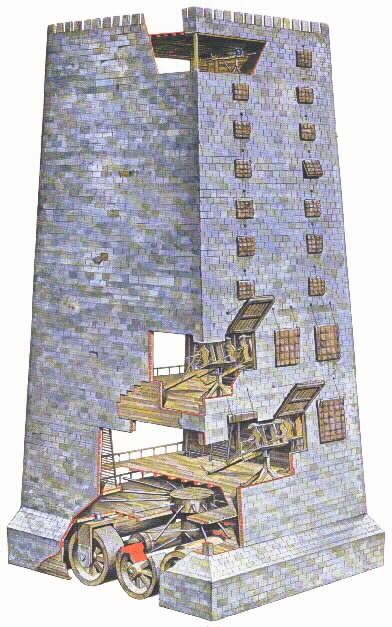 A large tapered tower, each side about 130 feet (41.1 meters) high, and 65 feet (20.6 m) wide, it rested on eight wheels, each 12 feet (3.7 m) high. The three exposed sides were rendered fireproof with iron plates, and stories divided the interior, connected by two broad flights of stairs. The machine weighed 160 tons, and required 3,400 men working in relays to move it, 200 turning a large capstan driving the wheels via a belt, and the rest pushing from behind. Casters permitted lateral movement, so the entire apparatus could be steered towards the desired attack point, while always keeping the siege engines inside aimed at the walls, and the protective body of the machine directly between the city walls and the men pushing behind it.

Ultimately it wasn't very successful. (from wiki: By cover of night he had the Rhodians knock a hole through the wall and channel large amounts of water, mud and sewage onto the area where the Helepolis was expected to attack the following day. Diognetus was successful; the tower was brought forth to the anticipated attack position and became irretrievably stuck in the mire)

But imagine this rolls up to your city and starts firing flaming arrows over the walls. Would the shit hit your pants before it hits the fan?

I always liked the Godendag

It's a wooden mallet with some metal spikes stuck on it. That's it. It was a super weapon because it let a bunch of Flemish farmers who made it at home completely wreck the shit of super-expensive and rigorously trained French armored mounted knights, who were supposedly the best in the world.

"Godendag" is Dutch for "Good Day" which supposedly the farmers said as they simultaneously crushed the heads and pierced the armor of French jerks.

You can't really have a thread about ancient superweapons without mentioning the War Elephant. These things were a formidable foe, arguably being the main reason Alexander the Great didn't manage to conquer all of India. They had a relevant role in European combat from about 300BC to whenever Europe ran out of elephants. 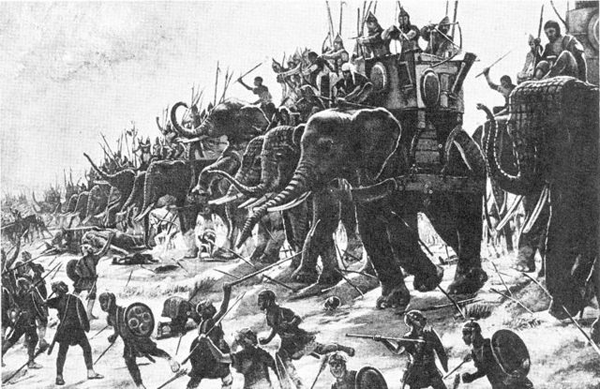 The use of the war elephant was based on the idea that a 14 ft tall animal that can trample you easily is fucking scary, as well as putting a dude or two with bows and arrows to ride on top of it. Some of the more well known elephantieers of the Ancient Era were Pyrrhus and Hannibal, both of whom fought against the Romans.

The Romans came up with at least two effective methods of countering war elephants. One way was to step out of their way, since they could only apparently be ordered to charge forward. The other, more entertaining method was to light pigs on fire and have them run at the elephants, completely freaking the giant animals out and hopefully wrecking some havoc on enemy troops. This method is attested to by the historian Pliny the Elder, who remarked that elephants are easily frightened by a squealing pig.