This one time a Roman army attacked the Greek colony of Syracuse, which at the time housed the famous inventor Archimedes. Instead of following the great Greek philosopher tradition of sitting there and taking it up the ass from an invading force, Archimedes invented a series of insane defense devices that scared the shit out of the invading Roman force, to the point that the defenders would only have to wave a plank and a rope from the city walls to send the nearest Roman invaders scurrying for safety.

It's probable that the majority of the defensive engineering machines in Syracuse were run of the mill things like catapults and trebuchets, but there were definitely some more interesting things in there as well. Such as the Archimedes' Claw, which may or may have not worked something like this: 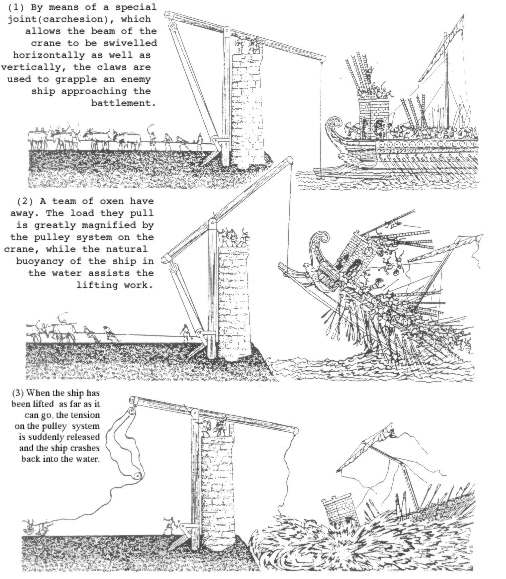 It was basically a huge pulley, designed to raise a Roman trireme up from the sea and drop it down again, with all of its crew of some 200 men inside. This in effect made it impossible for the Roman navy to carry out an amphibious assault on the city during the two-year-long siege. This chart gets bonus points for having the Roman innovation of a trireme-mounted siege tower depicted there as well.

There's also a widespread myth about Archimedes using a series of mirrors to light Roman ships on fire, using a configuration something like this: 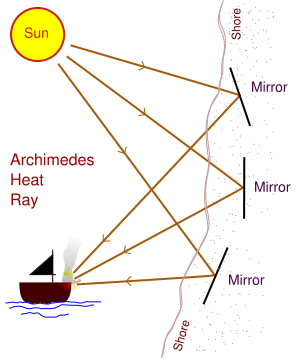 Greek fire. The recipe has been lost to history, though. 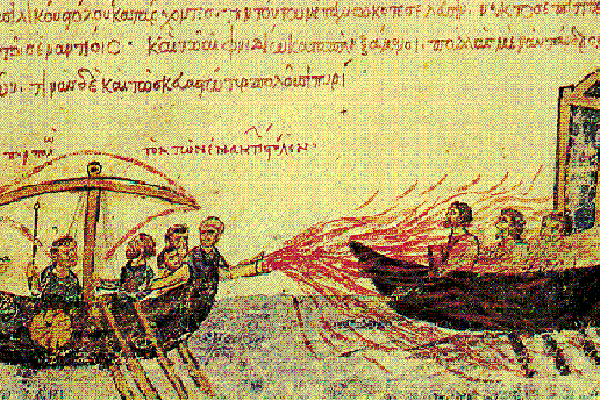 I love the Great Turkish Bombard. A handful- no more than 5- were commissioned by Mehmed II in 1450 to be used upon Constantinople.

Each gun fired a 1500-lb projectile a range of several miles- after firing the barrel was cooled with oil and could be fired again 3 or 4 hours later. After 90 days the guns breached the walls and Constantinople, the last stronghold of Old Rome, fell to the Moslem invader.

Mehmed thought they were the coolest fucking things he had ever seen.

They were positioned in the Dardanelles Strait to guard against possible invaders. And there they sat for 300 years, growing into the landscape, their carriages rotted away and their barrels full of dirt.

In 1803, the British showed up for some old-school Imperialism.
The local garrison unearthed the ancient guns, cleaned them up, loaded them with powder and granite shot, lit the fuse, and ran like hell.

The bombards worked flawlessly. The British fleet got its' shit torn up by 300-year old cannons- one shot was confirmed to have killed over 60 soldiers on a British ship and put a hole a foot wide through the bottom of the hull.

At the foot of Mehmed the II's tomb is a single granite cannon-ball. 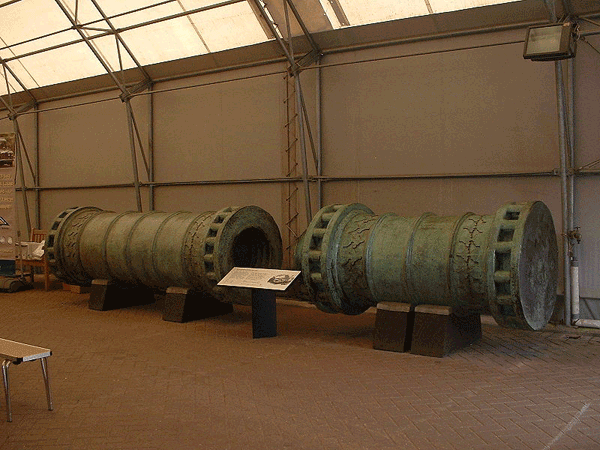