Yeah, war elephants are pretty much "superweapons" in the sense that they're totally awesome and impressive but functionally useless.

I think we have to give some credit to the Bulgarians, who built an elaborate system of fortifications basically out of wood, earth, and stone which successfully blockades from the Black Sea to the Danube for something like 400 years:

They held the entire Byzantine Empire, using a clever combination of swamps, forts, and cowardice in the face of overwhelming enemies.

"And the emperor Constantine, learning that a ungodly and filthy people settled in the lands beyond the Danube, in the Oglos, and that they attack and devastate the lands near the Danube, i.e. the presently held by them country, previously held by the Christians, was very upset and ordered for the departure of all troops to Thrace. And after arming the fleet, he set against them by land and by sea with the intention to make war with them and to chase them out. The infantry moved in battle lines towards the so called Oglos and the Danube and the fleet was ordered to anchor nearby. The Bulgars, seeing the dense and numerous lines, became desperate, fled in the aforementioned fortification and prepared themselves for defence. In the next 3-4 days nobody of them dared to show up and the Romans did not seek a battle because of the swamps. The filthy people, seeing the Roman weakness, recovered themselves and became bolder. The emperor suffered from a fit of gout and had to return to Messembria to take baths, leaving his generals to start the fighting and to engage them in a battle if they leave their fortifications. Otherwise, to put them under siege and to check their advances. The cavalry, however, spread the rumour that the emperor was deserting them, and fled on their own, without being chased by anybody. The Bulgars, seeing this, attacked and chased them and killed most of them by swords, and many were wounded. And after chasing them up to the Danube, they crossed it.'" 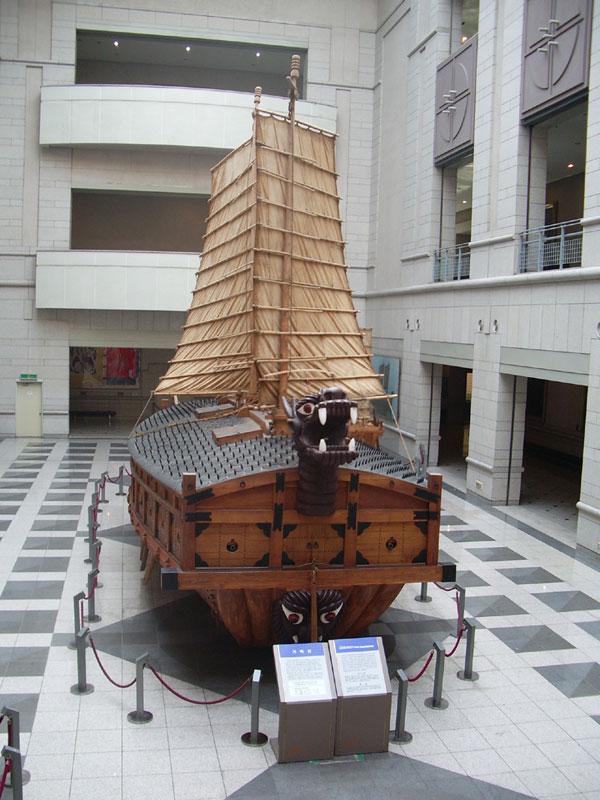 The first ironclads, built by Korea in the 15th-19th centuries. Used to hand the Japanese fleet its ass on a silver platter.

The dragon head was placed on the top of the ship at the bow. Several different versions of the dragon head were used on the turtle ships. The dragon head was first placed as an early form of psychological warfare to scare Japanese soldiers. One version carried a projector that could release a dense toxic smoke that was generated from a mixture of sulphur and saltpeter produced in the bowels of the ship. The smoke was designed to obscure vision and interfere with the Japanese ability to manoeuvre and coordinate properly..Another version of the dragon head had a cannon placed in its mouth so that the ship would appear to be more threatening.

Yi's own diary explains that a cannon could be fitted in the mouth of the dragon to be fired at enemy ships. He destroyed a fleet of 400 with six of these ships.

Humans are a really adaptive species and it took only about 4000 years from the invention of the sword to the idea of wrapping a person completely into metal so as to protect them from being hit by one.

Fully armored knights were a really expensive and really elite force in Europe. And only the richest people could afford a suit of armor like this. It looks completely ridiculous, and dominated the battlefields for only a relatively brief period from the end of the 13th century until people managed to make enough of halberds, warhammers and the aforementioned big clubs with spikes in them about 100 years later. The final adieu for plate armor was the invention of cheap gunpowder right before the Renaissance, which is probably why it's associated very strongly with the dark medieval age.

The common way of defeating another plate armored guy was to try and hit him in the armpit with a really thin sword resembling an icepick. The knights really only used the longswords and such when quelling peasant revolts, which was most of the time.