Tuesday, Oct 10, 2006 by Tekky "Jumpman16" Andrew-Jaja
This week's Comedy Goldmine started out in GBS's funnier, better-looking younger brother FYAD as an honest attempt from Danny Manic to explore the humorous extent of "realistic phony journalism that's not particularly compelling or important." What transpired, though, was a showcasing of eerie genius not often seen on our forums. Rascal and jc dracula lead the way.

Tim Harper stands beside what remains of his 1996 Honda Accord, still lying useless where Katrina deposited it one year ago.

"They've cleared most of the old cars out of here," says Harper. "Guess that haven't gotten around to this one yet."

After a year of reconstruction, Harper's car is only one of a long list of things that the American government has forgotten or neglected, or just plain "hasn't gotten around to."

Tim Harper stands beside the rusted hulk of his 1996 Honda Accord, still jutting defiantly from the rubble of the World Trade Center, where Katrina deposited it one year ago.

"They've cleared away most of the rubble and moved most of the cars," says Harper. "I guess they just haven't gotten around to this one yet."

SANTA MONICA, California (CNN) -- In a wicked jam by a man with a plan Fred Goldman rocked the mic to announce he would receive compensation for his role in the OJ hype. He's gettin this money cuz none other than OJ himself killed Goldman's only son. That's not what was voted on, but its true. Hes a murderr and need to go to jail, fuck OJ, americ ais corrupt, GO TO HELL

WASHINGTON (AP) -- HUGE OIL FIND IN GULF OF MEXICO>> CLICK HERE FOR INVESTMENT OPPORTUNITY?? WE HAVE THE BIGGEST SELECTION OF OILS, BUT WE STILL CANT LOWER YOUR gAS PRICES? WE'LL NOT BEUNDERSOLD. WE WILL GET THIES BIG OIL NO MATTER WHAT. ITS OURS. THE OIL IS GOING TO BE IN OUR GRASP, FINALLY< AHHAHAH! THIS IS THE BEST, OH MY GOD, ,,I CANNOT WAIT TO USET HIS OIL.

a man stung by wild stinger

australiasia- big flat shark, or ram shark, stinger chark or other marine creature attack man. the stingray was its name. it attacked bad, and wild, on the man, who was near it int he water. he was too close, unless it shot sting. it didnt though, it wasnt that kind of shark thing. so he was too close. the man is dead, he had a wife. there is a woman who was his wife, she has two childrne. they dont have a father. their father is dead. killed by wild stinger.

PLUTO (AP) - SPEAK NOT OF EARTH. IT HAS FORSAKEN US. TO SOMEDAY bbe DISCOVERED, IT MUSSt REMAIN A PLANET, OR THEY WILL NOT SEND THEIR SHUTTLe. WE HAVE BEEN LOST IN SPACE 100 YEARS: RENDERED IMMORTAL BY A SPACE BEINBG. WE ARE STRANDED ON PLTUO, PLEASE IFY OLU RECEIVE MESSAGE, RESTSORE PLUTO. WE WILL NTO BE F ORGOTTEN

Drug Use Soars as Teenagers Rebel Against Figures of Authority, Study Suggests

The midwestern town of Buckadoo, Ohio has undergone some drastic changes in recent years. Department stores have come and gone, the town center has undergone a drastic facelift, and, as one recent study suggests, teenagers have begun to abuse dangerous substances such as Marijuana to mitigate their suburban depression and slyly rebel against their overbearing parents.

"Yeah, uh, I guess it's just fun to smoke that shit," comments local teen Brice Douglas. "I dunno, maybe its cus school sucks so much."

The study has found that a dangerous amount of local teenagers have come to abuse the plant, forgoing wholesome local activities such as church workgroups and bingo parties.

Concerned mother of 4, Kat Parker, comments "It's like they just don't want to listen us. Parents are quickly becoming devalued in Buckadoo. I just wish Tommy could get good grades and stop hanging out in parking lots."

Washington (AP) - THE FUCKING LIBERALs HAS DONE IT AGIAN. THE PEOPLE OF IRAq ARE SAFE AND FREE, THE AL QAEDA ARE ON THE RUN, AND LET ME SAY NOW AS AN AMERICAN, THE WAR ON TERROR'SJ UST BEGUN. WE GOTTA GET EM ALL, ALL THE EVIL, DARKNESS, AND TERRORIST IN THE WORLD. ITS OUR JOB. TEHY SAY BUSH LIED? HE LIED TO SAVE THE WORLD, AND IT WILL BE FREE. GOD LBESS THE USA

There Are Mind Flayers in the City, No Matter What The Mayor Says

City Streets - Midnight -- Ice cold tentacles reach round your face and pull you down a manhole in the sewer. Where did you go? You are paralyzed with fear. A black terror dawns as you realize you are in the mind flayers' hell. You are mind controlled and dragged through slime and grime. Your rigid body obeys no command. Your brain is screaming! You fall into a pit filled with other poor humans such as yourself, who thought they could oppose the Mayor. Hours later, they come for you. You feel the bite at the back of your head. The last thing you see before your brain is sucked out is the dirt floor. You grind your teeth and silently hope that in this life or the next, the Mayor will somehow be brought to justice for his unholy alliance with the mind flayers.

Dog In The Wax Museum Is A Real Dog

Downtown -- There's a little dog in the wax museum that looks like a fake dog, but I heard that it's a real dog that they trained to stand very still. 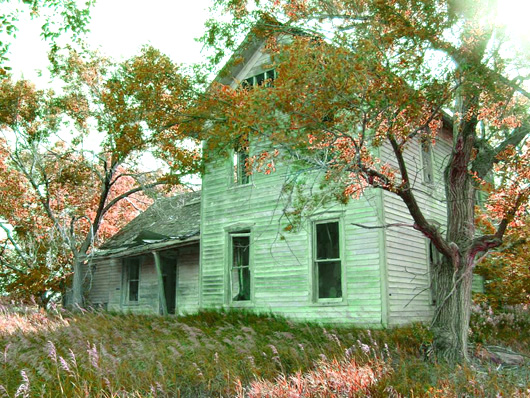 Washington City (AP) - A man used to live there. He lured his victims in with promises of free medical care. They called him The Blood Doctor. He killed them all with an axe. Three kids went in there last year, they never came out. They say that The Blood Doctor is only a legend, but he's real. Thirteen years ago, a little girl went missing. They called off the search after only one month. They wouldn't say so, but they knew The Blood Doctor did it. That was exactly thirteen years ago. I saw that little girl outside of the house this evening, and she looked like she hadn't aged a day. All of The Blood Doctor's victims become ghosts and haunt the house. Their sorrow for their bad deaths keeps them bound to this world. It was five years ago that some gangsters were in town, with a lot of money they stole. They had robbed a bank. They thought they could hide out in an old abandoned house...well, guess which house they picked. They say all that loot is hidden in there somewhere, but is it worth facing The Blood Doctor? Not on your life. You're crazy if you're thinking about going in there, but I won't try to stop you. There was the case of the young couple in love, looking for a private place to kiss each other. The Blood Doctor snuck up behind them and killed them during their passion. Their bodies were never found, not even a drop of blood. Once a year, at midnight, they walk through the ruined garden in the back yard holding hands. They are trapped there forever, just two more lost souls. That same fate could await you too. Don't go inside that house, at least not without Ghost Insurance. I could be tempted to sell you some, for a price...but better not to think of such things. No, I won't mention it again.