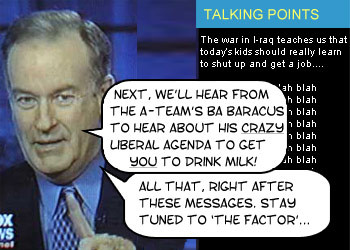 There's an insidious new problem in my school, and regular readers of my creative writing projects can probably guess what it is -- the unfair segregation of my hardworking classmates by the elitist fifth and sixth graders. Even if you don't know it, you probably know a fifth or sixth grader. They're always sitting on the left side of the cafeteria, eating their organic Lunchables and laughing at the rest of us stuck eating reheated hot dogs that aren't very warm to begin with. While the rest of us fight over who gets to play on the swings, they sit in their high plastic towers on the so-called 'big kid playground' and laugh at the rest of us who work our butts off to get to recess so we can work our butts off to have fun. It's unfair, and it's ruining our school system because the people in power (who are cowards) do whatever the fifth and sixth graders want. The sole exception is the Principal, who should honestly and truly be commended for his crusade to cut down on soda pop in schools.

I just cowered like a mouse.
For my uncle Larry was quite a louse.

He made me get naked and start to dance.
Then he put my hands into his pants.

And that's when I shouted without much glee,
In fact I said quite angrily

"I will not do the naked dance!
I will not get inside your pants!

He looked at me strange and put on a hat.
Then said:
"Good boys like pussy! Pretend I'm a cat!"

What happened next I care not to explain,
But later that day authorities came.

Me and the Sandbox
Ernie Hemingway, Age 7

The sand! It lies in motionless waves and suggests a playfulness perfect for my age. I feel it between my fingers and it's very cold, a bit moist and gritty. Tommy's ball went over the fence and some of the kids went to chase it, but it's gone. Gone like yesterday.

Me and the sandbox will be here for ever.

In the kitchen there is a guardian, a white* behemoth between the sink and the door**. It is not the guardian of the kitchen, however; it is the keeper and protector of its own contents, keeping them safe in the darkness inside, and cold until ready for use***. It is the Icebox, and its constant age-old vigil is never ending (interrupted only the rare power-outage), the only sign of its fatigue is the constant hum and occasional leaky puddle.

Occasionally, its quiet guard is celebrated, though not with fanfare or ceremony. Its medals are drawn in crayon****, paper adorned with poor representations of bears***** and wizards****** doing battle in impossible landscapes, and are rotated bi-monthly, or until a decent report card comes in the mail. Still, it is beloved, if not always noticed, for its ability to keep pudding cold and elusive until after supper.

*Not blindingly or entirely white, mind you, rather a not-quite-white white somewhere in between "eggshell" and "ecru". The exact colour is the ghost of spaghetti stains and fingerprints, carefully wiped away by the fair maiden (the wearer of the sacred Pink Rose Apron) known as "Mother".

**Though not too close to the stove, as their truce is a strained and fragile one at the best of times.

***Or at least until the eggs go bad.

*****Not actually bears, but otherworldly creatures that are furry, brown, and toothsome, occasionally with extra limbs. For all intents and purposes they appear to be bears but are, in fact, non-bears, though they do share the love of honey.