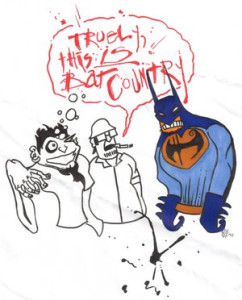 Strange memories on this nervous afternoon on the playground. Five minutes later? Six? It seems like a lifetime, or at least since Pokemon was on this morning while eating a bowl of Fruit Loops -the kind of sugar peak that never comes again. The playground in the afternoon was a very special time and place to be a part of. Maybe it meant something. Maybe not, in the long run . . . but no tag, no dodgeball or kick the can or red light/green light can touch that sense of knowing that you were there and alive in that corner of time and the world. Whatever it meant. . . .

History is hard to know, because of all the hired bullshit and pop quizzes and stupid essays, but even without being sure of "history" it seems entirely reasonable to think that every now and then the energy of a whole generation comes to a head in a long fine flash, for reasons that nobody really understands at the time-and which never explain, in retrospect, what actually happened.

My central memory of that time seems to hang on one or five or maybe ten sodas-or very early mornings-when I left sandbox half-crazy on Pixie Stix and, instead of going home, aimed my Huffy across the board across the creek at a ten miles an hour wearing jean shorts and a Spider Man jacket . . . booming through the sewer tunnel at the lights of playground not quite sure which turn-off to take when I got to the other end (always stalling at the secret clubhouse) . . . but being absolutely certain that no matter which way I went I would come to a place where people were just as high and wild as I was: No doubt at all about that. . . .

There was madness in any direction, at any hour. If not across the swings, then up the slides or down the jungle gym or the see-saws. . . . You could strike sparks anywhere. There was a fantastic universal sense that whatever we were doing was right, that we were winning. . . .

And that, I think, was the handle-that sense of inevitable victory over the forces of Old and Evil. Not in any mean or military or KND sense; we didn't need that. Our energy would simply prevail. There was no point in fighting-on our side or theirs. We had all the momentum; we were riding the crest of a high and beautiful wave as long as the fat kid stayed seated on the other side of the see-saw. . . .

So now, less than an afternoon later, you can go up on a steep hill behind the school and look West, and with the right kind of eyes you can almost see the high-water mark-that place where the wave finally broke and rolled back. Or maybe that was all the candy I had eaten.

My Backyard
by John Steinbeck, age 6

The long, unmowed blades of emerald-green grass stretched on as far as the eye could see. I remember a time before father built the pristine white fence, before the rainy season, even before the twinkle of my younger sister appeared in Olive's eye when the harsher times first reared their ugly heads -- killing off the daisies I so loved to play in and loosening the dirt around our favorite watering hole.

Our backyard follows the cycles of the land as it should. A rainy year is always followed by a dry year, when all the elders of the land complain either about the dust or the mud, depending. One year, the mud was so thick, my bicycle wheel was caught and I couldn't retrieve it until the midday sun dried the choking land around the spoke and I was able to pry it free.

The girl down the street is a whore.

And the World Moved On by Stephen King, age 12

The girl with the nice bike rode across the lawn, and Rusty tried his best to follow.

Rusty had been chasing after his master for hours; trying in vain to catch up with her.. but she was just too fast.
It wasn't that the girl didn't care for the puppy- on the contrary; she loved him with her whole heart and couldn't imagine a world without him.

The girl with the nice bike would have to hear the ranting and raving of her abusive, alcoholic father who would almost certainly take away her Gameboy and make her get up an hour earlier tomorrow to make sure that geriatric old bitch got her paper on time, and she was having none of that.

The old woman could take the Metro section and stick it up her ass for all the difference it would make to our young subject...

My thoughts were interrupted by a commercial for Tony the Tiger's favorite brand of sugar coated sweetness. 'Theeey're Greeat!!' he screamed at the top of his lungs to the slack jawed Children surrounding him. Great my ass. I got a cavity last year and now I'm only allowed to have Kix.

Dad and I were supposed to go to the Red Sox game this morning but he is running late, as usual. In the meantime, I'm stuck sitting on the porch trying to finish my shitty bowl of cereal and thinking about Rusty.
In fact friends and neighbors, I think about Rusty a lot these days. I think about how he always poops in my yard and how he will run out in the street in the middle of the day and how I really hate that girl because I don't have a dog of my own anymore.

My dog had been named Eddie, and I loved him. With his shiny gold coat and his lopsided smile, he looked a lot like one of those big ol' cartoon dogs you might see on TV, possibly solving mysteries or selling snack cakes to kids (Theeey're Greeat!!) He used to follow me around just like this girl's dog did... but poor Eddie wasn't the worlds smartest puppy by any means- 'Sharp as a doorknob' grandma used to say, and I believed her when she said this about Eddie.

The big white van had come out of nowhere, Striking my poor puppy in the side and sending him flying face first into the curb- knocking his head back and popping one sad, beautiful brown eye out of its socket. I held Eddie for what seemed like hours; wishing he would come back to me, wishing I could make it alright- but in the end, my mom had come out of the house and pulled me inside trying to shield me from the harsh realities of death. But enough about Eddie for now... I can't think of these things.

As the girl on the nice bike turned the corner and out of my thoughts, little Rusty hot on her heels (She really needs to just put him in the damn basket) My dad pulled into the driveway and started honking that stupid horn of his (He had bought it from some crazy man up in Augusta and it played the Macarana). 'Get in the car sport!' he said with a smile on his face. 'Have I got something to show you!'