EXPECTATIONS: It's been a long time (in Hollywood years, anyway) since Bobby and Peter Farrelly have been considered relevant comedy auteurs. Remember the time when Ben Stiller got his nuts caught in his zipper? Man, that was the height of comedy 13 years ago. In 2011, however, things have changed. Grossout humor is on the way out; these days it's all about the discussion of grossout humor. That's waaay more hilarious for some reason. For better or worse, the Farrellys are back with a movie about two guys who have to beg their wives to let them pretend to be single. I'm already imagining Hall Pass will be pretty painful; surely it can't be entirely terrible, can it?

REALITY: Let me just get this out in the open right now: Hall Pass is an awful, awful movie. I'm always willing to give sex comedies like this the benefit of the doubt, because while most of the sex crap is eye-rollingly awkward, the jokes are at least pretty decent. Plus, with the people responsible for There's Something About Mary and a couple Jim Carrey movies, you'd think they'd at least get the physical comedy part right. Right? Instead, the brothers Farrelly decided to phone in another feature-length sitcom and let their actors do most of the grunt work. 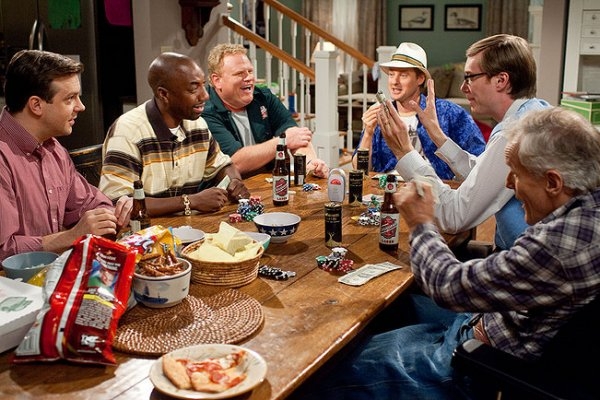 I've seen this episode, I think. They're all in trouble when their wives get home.

Rick (Owen Wilson) and Fred (Jason Sudeikis) are a pair of completely whipped 30-something husbands who can't help but think and talk about sex at any opportunity. After a particularly egregious display during which the two make gigantic asses of themselves, their wives (Jenna Fischer and Christina Applegate, respectively) decide that something must be done. Enter the titular "Hall Pass." Rick and Fred are given one week off from their marriages to do whatever they want with whomever they want. It's sort of like a marital Rumspringa. While Rick, Fred and their buddies basically waste a week trying to figure out how to get laid, their wives go up to a vacation house for the week, where they have absolutely no trouble flirting with a pair of baseball players. Shenanigans ensue, as they so often do in these stupid things.

There are really three things that conspire to destroy Hall Pass's chance at making a lasting impression. Firstly, the script is just lazy. Because Rick and Fred are given seven days to get their sex on, the Farrellys take the easy way out and make the film a series of poorly paced setpieces. In fact, the film is so episodic and lazily gross that you're probably better off staying at home and watching three or four episodes of Two and a Half Men*. I'll admit there are a handful of laughs along the way, but to find them you have to sift through an entire sea of one-note performances, bored line deliveries and just plain bad sight gags.

Second, the film's leads are completely above this kind of material. I've seen Saturday Night Live a couple times in the past ten years, so I know Jason Sunkist can be funny. The guy can crack me up simply by dancing like a jackass, so it's really disheartening to see him wandering around this movie begging for laughs. He plays Fred like a nerd desperate for attention, coming up with stupid fake slang like "fake chow" and acting so much like a doofus that it's hard to even buy him as a horndog.

Owen Wilson really doesn't fare any better as Rick. He's usually playing the free-wheeling lovable douchebag, and he's good at that role, so why stick him in a role that requires him to act like an adult? Surrounded by hot women and idiots, Wilson really has no choice but to play along and act like the designated driver who's forced to do body shots off a fat girl's ass. He's amazingly awkward in this movie, and it's hard to tell when he's acting and when he's genuinely uncomfortable. You know that thing that guys do in sex comedies when they're standing in front of a naked girl and they're about to get down to business but he just can't shut up about random small talk because he's a nervous tool? That's Owen Wilson for all 104 minutes of this crap.

But the thing that really derails Hall Pass, the thing that above all others embarrassed me to be sitting there, is the whole motif of the hall pass altogether. I'm not objecting to the concept; that's one of those "It had to happen eventually" kind of things. I'm objecting to how it's presented. Already, the term "hall pass" conjures up images of grade school. Whenever the teacher gave me a hall pass, it was either because I really needed to pee or because the principal wanted to yell at me for going to the bathroom so often. So right away, when Rick's wife sits him down and explains that she's giving him a "hall pass," she's immediately jumped from being concerned about their marriage to treating him like a child. Fitting, because from that moment on, he and Fred act like a pair of nine-year-olds on a sugar rush. Then whenever they mention to some random girl "Oh yeah, we can bone, I've got a hall pass," people stare at them like they just escaped from a mental hospital. It's ridiculous and more than a little condescending. But hey, what do I know? I'm on the wrong end of that double standard.

I've long accepted the fact that sex comedies (and romantic comedies in general) treat men like irresponsible manbabies because the plot demands that something dramatic(ally stupid) happen to get things moving. That's fine. But it's more than a little disappointing to find out that the guys who once made a movie about a bowler and an Amish guy fighting over a glorified hooker have also succumbed to Hollywood's "Men Are Retarded, Women Are From Venus" school of comedy. Pete, Bobby, you guys used to be smarter than this.

*Don't ever do this if you value your sanity.

MINORITY REPORT: Of course, marriage never did work out for old Monty Smythe. I tried it many times and what baffled the police the most was that not one of them was ever found. Until they dredged that lake, anyway. - Montague "Legally Sane" Smythe