Nobody Puts George VI in the Corner

Last week, I accused Unknown of being too much like The Bourne Identity. I stand by my review in that the film is a drab, boring spy thriller with a staid premise, but being too similar to a Matt Damon movie is not the worst thing about it. Most movies follow one of a small handful of archetypal plots. Some do it better than others, The Bourne Identity did it better than Unknown. Simple as that.

The reason I bring this up is that sometimes this works to a film's advantage. Sometimes people get attached to a film because they're hardwired to enjoy a particular type of story. Case in point: The King's Speech. The story of King George VI learning to overcome his speech impediment sounds about as interesting as watching dried paint peel. It's why they tend not to mention it in even the most boring history textbooks. So when someone greenlit King George VI's Wikipedia page, the screenwriters had the common sense to build the film around a familiar framework, one that people could instantly identify with and/or fantasize about. There's a very good reason why everyone and their aunt suddenly went grapenuts over The King's Speech: The whole movie is structured beat-for-beat after the 1987 modern classic Dirty Dancing.

Now, before you demand I return my film critic card, hear me out. Both films, in their own way, are coming-of-age stories about people learning to reconcile themselves with their stations in life. They're both schmaltzy period pieces with ridiculous amounts of nostalgia tossed in to delight parents and grandparents alike. Still not convinced? Okay, let's look at the plot description of Dirty Dancing. I'll replace the appropriate words to make it seem more relevant. 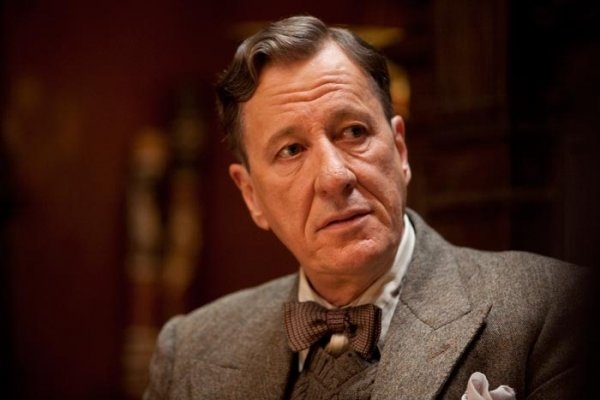 I see everyone else got an Oscar for this... where's mine?

"The story is a coming-of-age drama that documents a middle-aged man's rebellion against his father by starting a relationship with a speech instructor during a family crisis. Almost a third of the movie involves speaking exercises choreographed by Kenny Ortega, who will later go on to direct the 2006 Disney Channel Original Movie High School Musical."

See? It's practically the same. ...What? We have to go deeper? Okay, Christopher Nolan, let's look at the characters:

In this scenario, the similarities between King George and Baby are a little too close for comfort. Almost immediately, both characters are established as hugely obsessed with their fathers. Also, both are terrible public performers. Then, slowly, they're introduced to the scandalous world of the working class, where people do or say pretty much whatever they want. Why can't our heroes be a part of this world? It's completely beneath them, and they're naturally taken to task for even entertaining the notion. But nevertheless, Bertie/Baby are compelled by this say anything/do anything lifestyle.

And then we meet Lionel Logue/Johnny Castle, the instructor with unorthodox methods. While the characters themselves don't really have anything in common (let's face it, Geoffrey Rush ain't no Patrick Swayze), their role in the film is essentially to facilitate training montages. These scenes are fun to watch, and whenever you see the movie mentioned in a clip show or commercial or something, nine times out of ten that's what you'll see.

Sure, there have been dozens of movies about a broken upper-class person learning an important life lesson from a world-weary working-class Joe, but how many of those become relationship dramas about people trying to break away from familial expectations? Okay, probably a few still, but how many of those are about people learning to embrace new ways of thinking in order to be taken seriously?

At the heart of both these films is the notion that a person must either embrace a new way of thinking or become irrelevant for the rest of his/her life. With Dirty Dancing it was Baby learning to dance that led to her becoming an adult. While Bertie is already a husband and father at the start of The King's Speech, he comes to understand that in order to be the king, he'll have to master the young medium of radio if he wants to be taken seriously. As history has shown, he was taken very seriously indeed, by Hitler, the box office AND the Academy.

You want proof of this correlation in action? Let's look at some box office numbers: 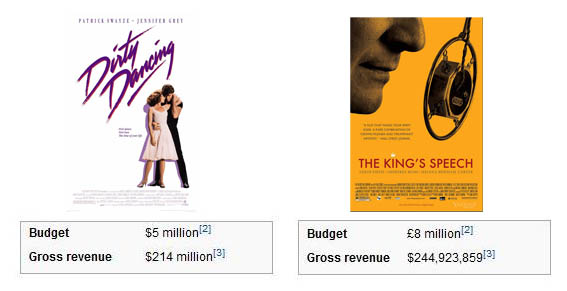 Can't argue with that.

Whether most people knew it or not, I'm willing to bet one reason why The King's Speech wound up being such a rousing success was because so much of it reminds them of something they've already seen four hundred times. In some cases (Unknown), familiarity breeds contempt. In others, familiarity breeds money and Academy Awards. Take a movie that everyone vaguely remembers fondly, dress it up, give it a bow tie and a top hat, and throw in a dash of Hitler, and you've got yourself a license to print money.

I get the feeling that once people realize this is what happened, we're going to be seeing a lot more prestige films loosely based on long-forgotten pop cinema. In thirty years, someone is going to dust off District 9, take out all the aliens and turn it into an Oscar-winning film that will actually be about Apartheid. Someone will rediscover Gidget, change the title character to a man and make it the billion-dollar David Hasselhoff biopic. Failing both of those, The King's Speech will probably find its way to Broadway in the near future, complete with dance numbers about speech therapy, and then I won't know what the hell to think.