Cyrus... Has Absolutely Nothing to do with Miley

Let's face it, folks. There ain't much out there this week. We're in the trenches of February here, and not even Nicolas Cage's beautiful visage can pull us out of it. In light of this, and because ProfessorClumsy locks me out of the office if I don't put out one of these things a week, let's take a chance and stay in tonight. Just you and me, dim the lights. That's right. It's time to pull out the remote, recline the chair, and hunt down the one remaining Blockbuster in your state, so you can enjoy a film you may have missed last year, the Duplass brothers' Cyrus.

John C. Reilly is a beautiful human being. Not literally, of course. I mean, he's not bad, but his forehead definitely puts him closer on the evolutionary ladder to our ancestors, homo habilis. However, John C. is in fact, a beautiful human, and that's why he's so great in Cyrus. Reilly plays John, a divorced man in a dark place in his life who is brought back to life when he meets a beautiful woman named Molly (Marisa Tomei) at a party. John and Molly's relationship is strained by the discovery that Molly has an oddly Oedipal relationship with her 21-year-old son Cyrus (Jonah Hill). Because of its basic premise, and because of its inclusion of John C. Reilly, you didn't watch it last year because your friends all thought it was "totally ripping off Step Brothers." Your friends are idiots. 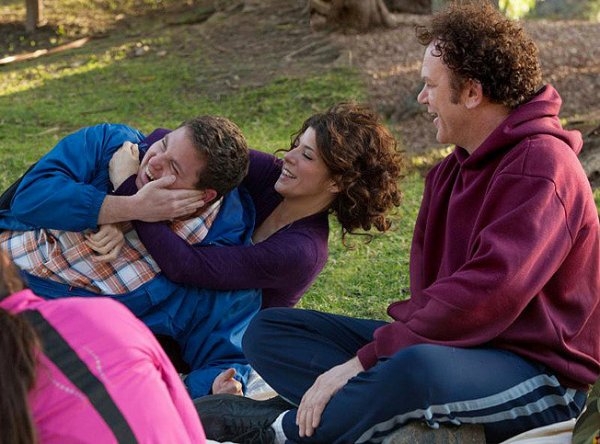 Cyrus is a comedy, yes, but it's not the kind you think it is. Specifically, it's not the kind of comedy you "laugh" at. It's more the kind of comedy you "occasionally chuckle at but mostly just feel awkward over." It's uncomfortable, because it's real. The three leads play up the humanity of their situation, and if that's what the fuck a "mumblecore" film is, then I like it. John C. Reilly portrays John with a beautiful pathos that makes him instantly relatable. He really is what a man in a hole should be, and his face is so earnest and honest you can't help but love the man a little. Jonah Hill is surprisingly good as the manipulative Cyrus, and Marisa Tomei is a smart enough actress to take a back seat and let the boys have their show. Desperate backstabbing ensues instead of hi-jinks, because this movie is about your dysfunctional real-life neighbors, not the wacky zany ones from TV.

If I'm being too succinct, it's because the film itself is incredibly simplistic. It's a simple story, and the movie just tells it as it is. Not everyone is going to like Cyrus. There are distinctly polarizing parts of the film, particularly with the camerawork, that whisper/scream "indie movie." (For the love of god, just because you're low-budget doesn't mean you don't have to focus the camera.) Most people will appreciate seeing realistic human interaction onscreen. However, if you're the kind of person who goes out of his way to avoid anything arty for fear of being mistaken for a hipster, this film is not for you. Also, quit being such a douche.