EXPECTATIONS: I don't generally enjoy biopics, but sometimes my interest does get piqued. In the case of The Fifth Estate, which seeks to tell the true story of Julian Assange and his WikiLeaks organisation, I can't help but be intrigued by that cast. Benedict Cumberbatch, Daniel Brühl, Laura Linney, Anthony Mackie, Stanley Tucci (for the teen crowd) and David Thewlis? Sign me right up, please.

REALITY: It's a shame, really, that The Fifth Estate isn't a more refined film, because there's a lot in here that is well worth watching. Unfortunately, this is an example of a film that tries to do too much at once and, while it certainly does a lot of it well, it never really comes together in a satisfying way. The Fifth Estate would actually be a better whole with some of its best parts excised, if that makes sense? 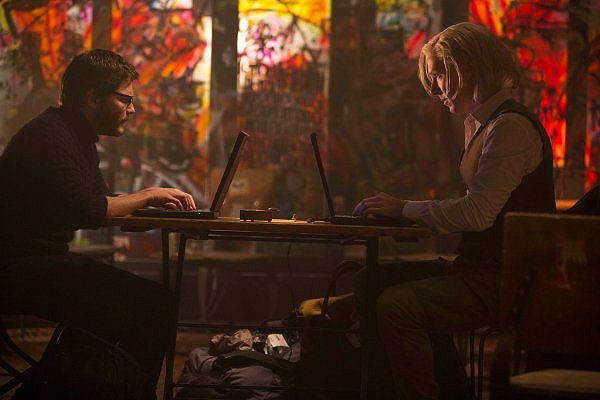 This is what the Current Releases office looks like, except we don't have any tables and only one computer.


Being the story of Julian Assange, it would only make sense that the film follows the exploits of the white-haired Australian revolutionary (Cumberbatch) as he goes about seemingly changing the face of modern journalism forever. The main focus of the film is on Assange's relationship with Daniel Berg (Brühl), his protegé, tracking the rise and fall of their personal and professional partnership. In the meantime, of course, the film also wants to be a political thriller, so it throws in a plot about Deputy Undersecretary of State, Sarah Shaw (Linney) trying her best to protect an informant (Alexander Siddig) while Guardian journalist Nick Davies (Thewlis) and his editor (Peter Capaldi) fight Assange on the matter of redacting sensitive material.

In attempting to tell three stories at once, it's no surprise that The Fifth Estate ends up being largely unfocused. A film about Laura Linney desperately trying to save an informant before his identity is revealed by an unpredictable media giant would have been excellent in and of itself, to be perfectly honest. All of her scenes (most of which she shares with Tucci and Mackie) are the best in the film and yet every one of them could just as easily have been removed to the betterment of the whole. Nothing ties the Sarah Shaw story to the central point of the film, as much as it's an interesting angle to explore, it adds nothing. 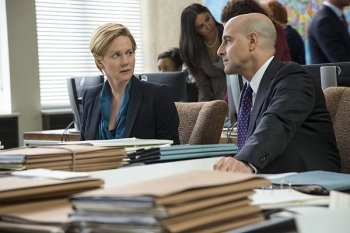 What movie are we even in?The next most interesting element of the film is the exploration of the relationship between Assange and Berg. This provides the motivations for everyone involved to continue doing what they do, but the real problem with it is that it drags its feet so much. Berg is given the most screentime, and it helps that Brühl's performance is excellent (as his tend to be), which leaves you wondering just what it is about his relationship with Assange that drives him. The film treats Assange as such an impenetrable character, the revelation of his personal secrets are treated like thrilling plot twists and no real insight is offered on his gradual shifting from a heroic figure to an antagonistic one. He is little more than an immovable object. By the end of the film, everyone is talking about Assange like he is a James Bond villain who has to be stopped at all costs and of course it falls to Berg, the man who loves him the most, to bring him down.

Of course, this shift in character comes along with a shift in the narrative focus, from character-driven drama to tense, plot-driven thriller. As the third act rolls along, everything is encompassed in a terse scenario wherein Assange seems set on publishing unredacted materials that will put many government informants' lives at risk and everything becomes a race against time. Had the film held its focus in this area, with journalists insisting upon Assange that he not publish dangerous materials, it would have been a much more interesting film, more akin to Lincoln than your average biopic (Rush, for example). Instead of being a meandering "bromance" with a tense third act.

The reason this lack of structure is a problem is that every individual part of The Fifth Estate is rather well executed on its own. There's an interesting recurring motif of an imaginary office wherein Assange, Berg and their hundreds of anonymous volunteers work, which reminds me of the completely real Current Releases office where three monkeys bother me constantly and which should be familiar to our tens of regular readers (sorry, everybody, it's a myth). This is done to reinforce the idea that while these people are working from across the world from laptops, they do have a level of organisation that isn't immediately obvious, which is the same reason we do it. Again, though, this is an idea that doesn't fit particularly well into the narrative.

It wouldn't be such a problem if The Fifth Estate didn't acknowledge its own fallacy. Right at the very end, Cumberbatch states, directly into the camera, that if we want the facts, we should go out and look for them instead of watching the movie we just watched. While I don't regret watching The Fifth Estate, it is rather odd to be told that I shouldn't have bothered right at the end, especially when it flies in the face of what the film's actual message seems to be: that revolutionary thinking comes from impersonality, single-mindedness and ethical ambiguity, which are all things the film itself could have done with being more of.

MINORITY REPORT: I refuse to believe that anything by the director of The Twilight Saga: Breaking Dawn: Part 1 is anything less than a masterpiece. Shame on you, Ian! SHAME ON YOU! - Sean "Keanu Grieves" Hanson