EXPECTATIONS: The last time Tommy Lee Jones and history crossed paths on film, the result culminated with readers labeling me a dirty space alien who doesn't understand the basics of cinema. So I guess it's kind of fitting that Emperor stars Jones as General Douglas MacArthur, a man who once claimed the Allies' next great foe might well come from outer space. This film is set in post-World War II Japan, so I don't expect anything quite that nutty, but nonetheless, I'm looking forward to seeing America's Grandpa take on this kind of role.

REALITY: Have you ever tried to discuss movies with someone who claims to be a history buff? The conversation tends to come to a screeching halt when they eventually say something like "Well, I like history, so I enjoyed Pearl Harbor," as though the key to enjoying that garbage is having even a passing interest in the general subject of History. It shouldn't be enough for a film to simply present historical events for our brains to catalog and file away. We go to these movies because we want to engage with history on an emotional level. Hell, that's why we go to any movie. Emperor is a film that seems to understand this, but can't quite connect with us the way it ought. 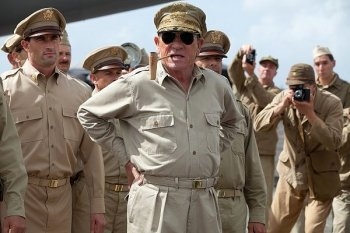 There's your ticket sale, right there.In the days immediately following Japan's surrender to the US in World War II, General Douglas MacArthur (Jones) arrives in Tokyo to clean house and help the country get back on its feet. He assigns General Bonner Fellers (Matthew Fox) to investigate whether Emperor Hirohito personally gave the command to attack Pearl Harbor. In the meantime, Fellers desperately scours the ruined cities of Japan searching for his lost love, a Japanese teacher named Aya (Eriko Hatsune).

The film's structure - based on the book His Majesty's Salvation by Shiro Okamoto - is its most maddening element. Half of the film is a procedural drama that would fit right at home on CBS's line-up of three-to-four-lettered cop shows. The other half of the film is a tale of love and loss involving Fellers and Aya, presented in a series of scattered flashbacks. These flashbacks run on for so long that it's easy to forget we're in the middle of a deadly serious military investigation, with the life of the Emperor and the fate of Japan hanging in the balance. Sometimes it's downright jarring when we return to the film's present and remember what we're actually watching.

Perhaps the intention here was to show how different the country had become in the span of five years. Perhaps it was to act as some kind of vague metaphor for Fellers' conflicted relationship with a country he clearly loved. Or perhaps it was because Tommy Lee Jones only had five minutes of screen time in the entire film and director Peter Webber realized that alone wasn't going to be enough to carry the whole thing. The fact of the matter is that the relationship between Fellers and Aya is the lynchpin for the whole production. It's also woefully undercooked and haphazardly thrown into an otherwise fascinating story. It's sort of like cherry-picking the worst parts of The Host and then splicing them into Body Snatchers '78.

On the surface, the two stories have absolutely nothing to do with one another. Watching Fellers track down Japan's heads of state only to periodically flashback to the same man courting a pretty exchange student feels tonally inconsistent. Eventually, however, we meet Aya's uncle (Toshiyuki Nishida), a Japanese general who agrees to teach Fellers a little something about the country's commitment to tradition (and why they're going to destroy the US once the war breaks out). The two stories finally converge and the film starts to click, but by this time Emperor has become tiresome. 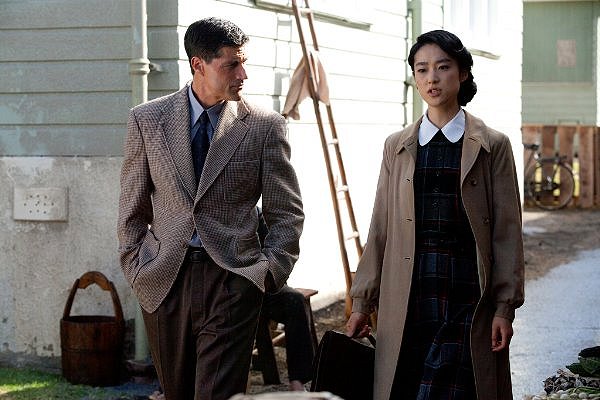 
Matthew Fox does a fine job of carrying the film in Tommy Lee Jones' absence. It's clear he's much better suited to a role like this instead of his maniacal-chicken villain from Alex Cross. It's just a damn shame that we don't get to spend more time with MacArthur. Jones doesn't exactly disappear into the role, but put Tommy Lee Jones into any movie wearing aviators and sporting a corn-cob pipe and tell me that wouldn't make for a fascinating scene. He's reached a point in his career where his mere presence elevates a film, but in Emperor, I can't help but feel like they missed an opportunity to explore the man's feelings on Japan more thoroughly.

One of the last scenes in the film features MacArthur finally meeting Emperor Hirohito, and it's by far the film's finest moment. There's no question a film more focused on MacArthur's anxieties about meeting and then passing judgement on the Emperor of Japan would have been far more engaging than forcing Matthew Fox to stumble through two halves of two completely different films.

Emperor attempts to contextualize its story by touching on a few key ideas concerning the war in the Pacific Theater: The Japanese government spreading Anti-American propaganda, causing a bunch of kids to gleefully pelt Fellers with rocks; The maelstrom of nightmares that were the American fire raids on Tokyo; and scenes painting Japan's military leaders as maniacs plotting to manipulate the Emperor into continuing the war. All of these contribute to a sense that any one of these tangents might have made for a film actually worth watching. As we have it, Emperor is only captivating in fits and starts. But then if you're into history more so than storytelling, this film might be perfect for you.

MINORITY REPORT: Next to comic-book fans, history buffs are the worst friggin' people to talk about movies with. It's like caveman logic: "I like thing. Thing is on screen. I like screen." Screen doesn't actually need to be good, it just needs to have Thing. Why even make a movie then? Let's just take a picture of someone in a costume and show that for two hours; apparently it's what you want. - Martin R. "Vargo" Schneider