Welcome to the Punch

EXPECTATIONS: John Woo's The Killer, but set in London. That's the impression I'm getting from the trailers, anyway. Looks like it has guns, a great British cast, and more guns. Then the cop and the criminal team up for some reason. All good stuff.

REALITY: Welcome to the Punch ends up feeling less like The Killer and more like the British response to Jack Reacher, but it's better than Jack Reacher so that's okay. It is, as you'd expect, a plot-driven action thriller with morally ambiguous cops and robbers fighting a mutual enemy. Nothing groundbreaking, but there's some interesting stuff going on in here. 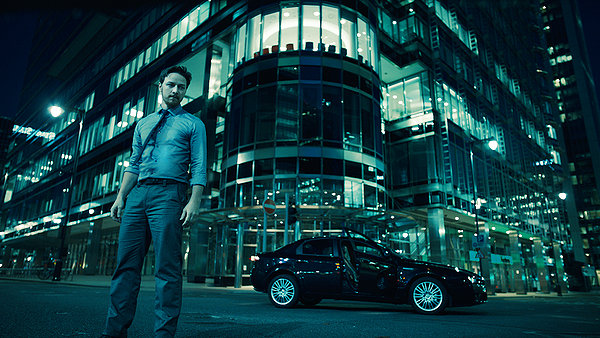 I just want to frame that and put it on my wall.


We're introduced to cop Max Lewinsky (James McAvoy, again) in his dogged pursuit of bank robber Jacob Sternwood (Mark Strong). The chase goes horribly wrong, however, and Max is shot in the knee for his trouble. Some years later, Sternwood's son turns up at the local hospital with a bullet in his stomach, spurring him into coming out of hiding and finding out who did it. Max is right back in the fight, of course, but soon finds disturbing evidence of a conspiracy with the help of his partner Sarah Hawks (Andrea Riseborough). Also, just to remind you that this is a British film, Daniel Mays, David Morrissey and Peter Mullen are in it too.

The plot goes through various twists and turns, good guys turn out to be bad guys, bad guys turn out to be good guys and in the end a lot of guns start going off and it kind of runs out of steam. You know how mystery plots are only interesting when they're still mysterious? In films like this, once the conspiracy is revealed and we know who all the baddies are, we're just left waiting for the inevitable violent denouement to wrap everything up. It usually involves meeting in a quarry/warehouse/dock at night and one of them will always insist the other comes alone and they never do and then after a lengthy dialogue scene there's some shooting. Maybe there's some personal beef between the hero and a secondary villain that gets resolved with punching, and sometimes there's somebody in need of rescuing, and we've seen it all before.

Yet Welcome to the Punch manages to make this work, to some extent, by paring it down to as few cliches as possible. Yes, they introduce tired concepts just so they can fill in all those blanks in the third act like a crime thriller mad-lib, but they do try their best to keep it minimal. This is a lean film that keeps the headcount down where it can: You get the impression that they trimmed a lot of fat. The best piece of evidence for this is Jason Flemyng, who shows up for a single scene and, in a hail of gunfire, is promptly dispatched. His character is then referred to repeatedly, notable only for being dead. I imagine there was probably a bit more going on there that was excised for expediency's sake. Too much time spent on plot leaves little for characterisation; Welcome to the Punch works well in that regard. 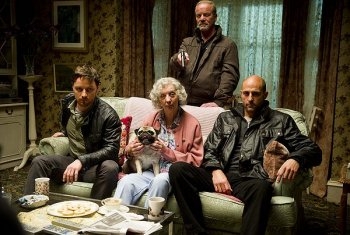 Sundays, eh?Max and Jacob make for a very interesting pair. They're not a comedy duo of cop and criminal brought together for one big job like in a Walter Hill film; instead, they are each tortured by the existence of the other. Max has to drain the fluid from his wounded knee on a regular basis, and Jacob blames Max for what happened to his son. They eventually develop a mutual respect, of sorts, but they never get pally. The real partnership is between Max and Sarah, and it thankfully doesn't devolve into a crowbarred-in romance. You'll be pleased to know that Max isn't forced to rescue her at the end, either.

The best scene in the film finds McAvoy, Strong and Mullen paying a visit to the film's consistent antagonist (Johnny Harris) at his grandmother's house. During intimate, character-focused scenes like this, the film fires on all cylinders. Yes, it's full of plot exposition, but it doesn't spew everything out in words: It's a dangerously suspenseful scene with these characters trying not to be too obvious about their intentions until the very last moment. It takes place toward the end of the film, and it works so well that it probably should have been the ending, but I'm glad it was in there at all.

There may not be much new in Welcome to the Punch, but it's a tightly constructed and well-executed action thriller. It tiptoes around gun-related issues and ends up having little to say on the matter (this apparently takes place in the near future where gun crime in Britain is ridiculously rampant), but you can forgive all that because Welcome to the Punch does what it does very well.

MINORITY REPORT: You're forgetting the biggest and most recently established cliche in this film: Casting Mark Strong as a bad guy. - Martin R. "Vargo" Schneider