EXPECTATIONS: Danny Boyle has a new film out; that's always exciting. The trailers certainly make this one look interesting, too, with a hypnotised James McAvoy blowing Vincent Cassel's head in half and then having Cassel's half-head carry on talking to him. What's not to love about that? I just wonder if Boyle can even hope to top the level of spectacle seen in his Olympics opening ceremony or the level of emotional intensity seen in 127 Hours. But, then again, who could?

REALITY: I guess Boyle decided that the best thing to do here was just keep it as small and intimate as possible, which makes sense. Trance certainly is small and intimate. Unfortunately, it suffers from an stagnant script. There are some good moments of cinema here - moments of almost-greatness that threaten to elevate this into something much better - but, ultimately, Trance is just a bit dull.

Good to see somebody is enjoying themselves around here.


It all starts when art auctioneer Simon (McAvoy) receives a severe head injury during a robbery by the enigmatic career criminal Franck (Cassel). After a little brain surgery and a long rehabilitation in hospital, Simon returns home whereupon Franck tracks him down with a revelation: The painting he stole was nothing more than an empty frame. Turns out Simon was in on the whole thing, but decided to keep the painting for himself. The problem is that he has repressed the memory of where he's put the damn thing, so he sees hypnotherapist Elizabeth (Rosario Dawson) to help him recover the memory. As the sessions continue, he learns that there's more than just the location of a hidden painting being repressed in his mind.

Let's start with what does work. For one thing, Boyle's sense of cinema doesn't seem to have dulled any. The ferocity with which he paces certain scenes can be mind blowing. After Simon's fateful head injury, we see x-ray footage of his skull being drilled, followed by his own distorted POV. It's clear that this is what Boyle intends for his audience, to drill into our brains and then watch the distortion it causes. There are some scenes where it is made deliberately unclear if what we're seeing is a flashback or a dream or Simon is really himself or if he's out-of-body, watching himself. It's all very clever, but it somehow feels completely at odds with the lingering, verbose script. 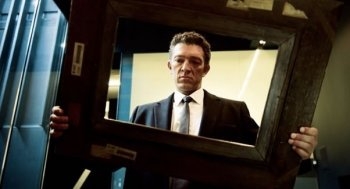 I can't help but feel that I'm missing something here.It's all about the script with this film. A film like Trance shouldn't feel the need to explain itself, it should show some faith in its audience to piece together a less traditional narrative. What could have been a fascinating examination of true human nature, a man getting to know himself for the first time by entering his own mind, is shot down and turned into a standard crime caper film with some wacky bits thrown in for good measure. With a lot less plot and a lot more ambiguity, Trance could have been on par with 127 Hours for pure cinematic storytelling. That film had one man essentially narrate his half-remembered life to us through flashbacks he was unable to participate in and learn a lesson through the telling of the story. Trance attempts something similar, but Simon's dilemma is entirely too contrived, and the lesson he learns can't really be applied to our own lives unless we're paranoid schizophrenics.

The three leads all do their best to make it work. McAvoy is especially good as he struggles to understand himself and his memories. Cassel is just as charismatic as ever, while Rosario Dawson gets stuck with a character who just never stops talking. All of her dialogue is expositional, too, so you get tired of hearing her calmly explain things to everybody. (This is just another damning issue with the script.) Only Dawson's performance keeps the character from being completely unbearable.


As we travel through this film, we should be getting to know the humanity behind these characters' actions, but instead we get to the end and not only do we not really know these people any better, we also just don't care anymore. The storytelling device of the unreliable narrator is one that is often broken out to make sure the audience is paying attention. Here, every character is an unreliable narrator. When the audience can't trust anyone, it's hard to know just how you're supposed to feel at the end of the third act. You don't feel happy or sad for any of these characters because they're all a bit despicable and weird. Instead you feel exhausted, and, worst of all, bored.

MINORITY REPORT: So boring it puts you in a trance, right? I'll be here all week. - Sean "Keanu Grieves" Hanson