EXPECTATIONS: This is Jurassic Park, folks. You don't need me to tell you if Jurassic Park is awesome. You know it is. My assignment this week is basically you saying "Hey Marty, how awesome is Jurassic Park?" and me saying "Oh man you guys SO AWESOME." Unfortunately, that doesn't really count as a review, so much as it is a statement, so I'll have to do a little more work than that. 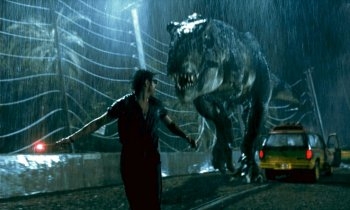 There's your ticket sale, right there.You probably don't need me to recap the plot of Jurassic Park, but for the sake of consistency, I'll do it anyway. Eccentric billionaire John Hammond (Richard Attenborough), who is basically Richard Branson in thirty years, has bought an island where he and a bunch of scientists (B.D. Wong) have cloned friggin' dinosaurs. Unfortunately, combining billions of years of evolution is an insurance nightmare, so before his investors will let him open the park to the public, he must bring in paleontologist Alan Grant (Sam Neill), paleobotanist Ellie Sattler (Laura Dern) and chaos theory specialist Ian Malcolm (Jeff Goldblum) to do a risk analysis.


Meanwhile, programmer Dennis Nedry (Wayne Knight) is planning to sell dinosaur embryos to a rival company, because I'm guessing Stegosaurus clones are a massive untapped market, and to steal them and get away, he has to shut down all of the main security systems. Chaos happens, after about 80 minutes of Malcolm talking about chaos happening. (This is not a negative thing. I could listen to Jeff Goldblum talk about mathematical probability all day long.) Also there are two little kids, fulfilling Spielberg's requirement that all his films have daddy issues involved.

Jurassic Park is a pretty much perfect film already, so the only thing people had to to worry about was whether the Post-Conversion 3D would somehow ruin it. First off, the idea that a later change to anything somehow devalues the existence of the original is a dumb belief held by obnoxious people. That said, Post-Conversion 3D has a bit of an ugly reputation, being seen as inferior, and commonly referred to as "fake" 3D. This is because it's incredibly possible to do Post-Con incredibly cheaply and lazily: You basically just superimpose the film image on top of itself and go get a beer.


There's a pretty easy test to see how crap the 3D is on a film you're watching: Take off your glasses. The blurrier the image is without glasses, the better the 3D. I tried this test several times with Jurassic Park, and I was pleasantly surprised that each time I did, specific items or people in the shot were blurrier than others. It was selective conversion, basically singling out the most important visual focus points in the shot in order to to create a diaorama-style sense of depth.


The highlight here is... Well, it's the T-Rex, but the non T-Rex related highlight is watching 3D Dr Hammond talk to the 2D version of himself on screen during the video-tour scene. In fact, the best part of the conversion might be their choices of what not to convert. By leaving the Mr. DNA video alone, they subtly made it feel like we are watching the movie that the characters on the screen are watching. We've never really been anti-3D here at Current Releases, and in fact, we get excited when we see creative uses of it. The conversion team for Jurassic Park kept it smart and subtle. 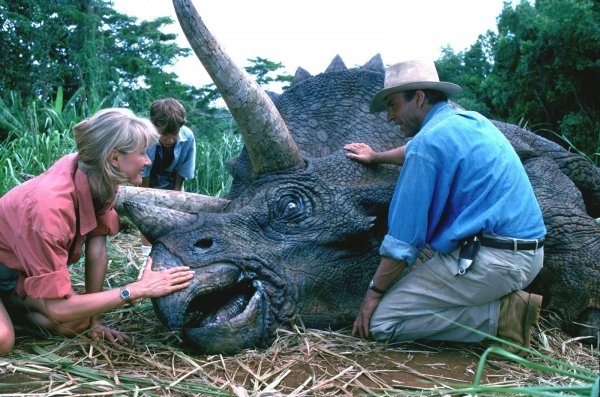 Turns out this is symbolic and not a literal dinosaur.


The reason Jurassic Park is as beloved as it is, and the reason you need to go out and watch it on the big screen, is that it's pure cinema. It starts off as an action-adventure movie, influenced by pulp serials and '50s sci-fi, and then it morphs into a '70s slasher film, right around the time Samuel L. Jackson reveals that the phones are down. At this point in his career, Spielberg was basically a kid playing with his action figures. I'd like to imagine that the pitch meeting for Jurassic Park contained the sentence "What if Indiana Jones met Jaws... but Jaws was a DINOSAUR?"


Anyway, the visual cues, the lighting, the production design, all of them change with the shift in tone, which works because we've been forewarned of potential danger from the first scene of the movie. The beginning of the film is bright, cheerful, and optimistic. John Williams' super-adaptable theme (honestly, his best work) invites us in. Like Hammond, we only see the positive possibilities. Then, when nightfall comes, we meet the terrible truth of potential consequences, in the form of a T-Rex.


What I'm saying is that Jurassic Park is basically a masterpiece of visual storytelling. It contains some of my favorite moments of visual foreshadowing of all time, like when the helicopter is descending onto the island, and all the cast members buckle their seatbelts, except for Dr. Grant, who is unable to find the right components. Instinctively, he ties the two nearest pieces together, which both happen to be female pieces, now attached to achieve their natural function.


Also, during this latest viewing, it occurred to me for the first time that the characters never figure out what Nedry was up to. Thematically, it doesn't matter. From their point of view, he is basically an agent of chaos. He's a plot device, just like the storm that causes the problems with his plan in the first place. It's complete and pure happenstance with a little bit of greed and hubris that leads us to the post-Nedry scenario, which is great, because those themes are all over the place in this movie.

It's because of this, and some still-astonishing visual effects, that Jurassic Park holds up so well. It's awe-inspiring to see those Brachiosaurs for the first time, and if you have children who haven't seen this yet, for the love of God, let them experience it. Everything works together so perfectly: Williams' score, the visuals, the horror-movie lighting cues, the fact that Dr. Sattler is the smartest, most capable person in the whole damn movie, all of it. Honestly, the film is just as great now as it was 20 years ago, and because the conversion was clearly done with love and forethought, it's somehow better and smarter than ever. With the exception of the "Unix system" line. That line is hilarious now.

MINORITY REPORT: Who can possibly dislike Jurassic Park? My young nieces love Jurassic Park, my grandparents love Jurassic Park. It's one of those rare examples of a film that genuinely plays to every demographic. Please re-release this every twenty years. - Ian "Professor Clumsy" Maddison