EXPECTATIONS: "From the director of Good Burger, Norbit, Meet Dave and some episodes of All That comes a new comedy-drama starring Eddie Murphy." Yep, my asshole's already twitching.

REALITY: Two qualities keep A Thousand Words afloat through most of its runtime, and both of them are Clark Duke. I expected worse from director Brian Robbins (who apparently confuses himself with Terrence Malick, based on the low-rent Tree of Life knockoff imagery in the final act). As bad as A Thousand Words is, it's not quite as terrible as Norbit ... or Meet Dave ... or Good Burger. Eddie Murphy only plays one character, and Kenan and Kel are nowhere to be found, so maybe that's the key to elevating a Robbins film from "irredeemable" to "slightly worse than mediocre."

As a general rule, one should be able to communicate the premise of a mainstream PG-13 comedy-drama in one sentence, but the premise of A Thousand Words is so incredibly lofty, it's hard to nail it in less than a paragraph.

Here goes nothin': Despite a guru's (Cliff Curtis) efforts to save him, literary agent Jack McCall (Murphy) dies at the hands of a Bodhi tree (bad CGI) because he talks too fucking much. The plot's quite a bit more complicated than that (the tree loses a leaf for each word he says and when the branches are bare, McCall will die), but suffice it to say, this is screenwriter Steven Koren (A Night at the Roxbury, Click and Jack and Jill) imitating Charlie Kaufman and failing miserably, so why sweat the details?

At best, A Thousand Words is a study in clichés and illogic that spurs those of us who watch shit like this week after week to dwell on the larger issues plaguing most mainstream comedies -- mainly, their careless inattention to detail and steady reliance on lame stereotypes and regurgitated plot devices. The premise of A Thousand Words may be novel -- actually, it feels like the product of two drunk movie geeks trying to one-up each other in a game of "pitch the improbable premise" -- but its trappings are as old as cinema itself.

Let's start with Curtis, who's Maori but has fashioned a career by playing characters who are anything but Maori, in the grand tradition of Antonio Banderas playing Arab, Mickey Rooney playing Asian and anyone who played Charlie Chan or Fu Manchu. Curtis has played South American characters, Middle Eastern characters (most of them bad guys), The Evil but Handsome Prince Khalid in The Majestic (not making that up) and some guy named Kip in Six Days Seven Nights. In A Thousand Words, he plays Dr. Sinja, who's defined by three characteristics: his spirituality, his vaguely Indian accent and his dedication to helping an unlikable, self-centered protagonist achieve spiritual awareness. It's almost like writer Steve Koren went out of his way to construct the first Magical Non-Negro (because, y'know, Murphy ain't white, but Jack McCall might as well be) while casting directors Juel Bestrop and Seth Yanklewitz went the extra mile to crank that mindfuck to 11 by casting a guy from New Zealand as a non-denominational Indian guru who really likes pie because you can't get pie in Bolivia. 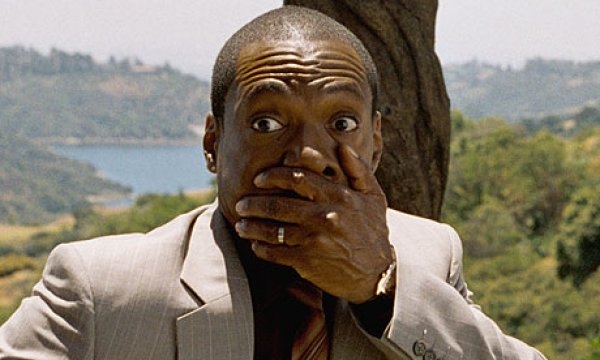 Uh oh, I'm not sure if farts count as words!

Elements of A Thousand Words that aren't quite clichés feel clichéd, such as the scene in which McCall has to make a choice: Say something and lose a leaf, or let a blind man cross a busy street. McCall chooses the latter, and hilarity ensues as cars swerve to avoid the blind man as he remains blissfully unaware that really loud vehicles are screeching and colliding in close proximity while McCall chases after him. Such comedy seems eerily familiar, but even with the help of my beautiful research assistant, Marty "Vargo" Schneider, we could only recall two precedents: Mr. Magoo and Speed, and the woman in Speed wasn't blind.

No matter, A Thousand Words deals in the kind of broad comedy that's carried 2 Broke Girls to a second season, with the added bonus of McCall operating in a world without consequences. I haven't known many blind people in my life, but it seems Blind Man would hear and sense cars braking and crashing if he could sense Murphy stroll up next to him at a crosswalk -- even if Murphy is generally louder (and possibly smellier) than the average car.

Then again, this film never quite plays by its own rules. When Koren is establishing the premise, when McCall is playing "connect the dots" between his utterances and the falling leaves, it's quite clear the Bodhi tree ain't fucking around. McCall silently gives the tree the finger; the tree sheds a leaf. This somewhat -- no, this fully neutralizes the predominant way through which McCall communicates with other characters: amateur sign language. What is the middle finger if not amateur sign language?

Besides these inconsistencies and a slavish devotion to being mindlessly offensive, A Thousand Words -- like many romantic comedies -- strives for a relatively dramatic final act it never earns, mainly because it relies on one shopworn conceit: The romantic leads create conflict by adamantly refusing to communicate at the most critical of moments. McCall wastes more words on other characters (including the tree, which he curses even after he realizes his dilemma) than he does explaining his sudden silence to his wife (Kerry Washington), who never seems to notice the giant fucking Bodhi tree that emerges suddenly in their backyard during what she thinks is an earthquake. He continues that silence after she threatens divorce, but tells the tree to "fuck off and die" (or something to that effect) in the very next scene. That's not lazy screenwriting -- that's actively bad screenwriting that smacks of revision by canceled-sitcom defectors toiling in anonymity to preserve what little dignity remains.

But, hey, at least it has Clark Duke, who says something funny every 10 minutes or so to remind us he's the biggest underdog comedian working in American cinema, sort of like Seth Rogen to Eddie Murphy's Adam Sandler here -- and if you get that joke, you'll probably like A Thousand Words waaay more than I did and spend money at the multiplex to reaffirm an awful truth that proves our world is godless or engendered by malevolent cruelty: Brian Robbins has a career ahead of him, and Eddie Murphy's isn't over.

* Don't believe me? Check the cast list, on which a good chunk of the characters are defined by their traits.

MINORITY REPORT: I love the idea that they made a movie about Eddie Murphy receiving a death sentence for being a motormouth, but I really hate the fact that they made it a family film so he's not allowed to swear anyway. What a high-concept recipe for disaster. -Joseph "Jay Dub" Wade