EXPECTATIONS: Earlier this week, Jay Dub mentioned to me that the other members of the team could help him out and pick up a talking-animal movie once in a while, and the response was a resounding "HAhahahahaNo." (Ian eventually backed down and endured Top Cat.) But as some sort of comfort, I set out to prove that a family movie doesn't have to have poop-eating rodents or prison rape to be terrible, and put three of the worst-looking options from the "Family" section of Netflix, none of which I had ever seen, in a poll on our Facebook page. Howie Mandel's career-defining Little Monsters won by a landslide, so you must all know something I don't know.

REALITY: I honestly didn't know anything about this film before watching, and odds are that you didn't either. During its initial run, the film played in a whopping 179 movie theaters, so the only reason anyone knows about this movie's existence is that they remember seeing the cover when they were kids wandering around the video store. This is another reason that we should all be celebrating the death of Blockbuster. On the off chance you do have memories of watching this film as a child, you've likely repressed them, so allow me to give you a "trigger warning" for the rest of the review.


Little Monsters, a film I can only assume Lady Gaga is a fan of, follows a lonely sixth-grader named Brian (Fred Savage) who finds himself being blamed for things he hasn't done. However, as we get to know Brian, we discover that there are tons of things he does that he actually should be getting in trouble for, so I figure it's about even. Brian's little brother Eric (Ben "Meets World" Savage) claims to see a monster in his room, and challenges Brian to sleep in there on a dare. After setting a trap with some DORITOS brand tortilla chips, laying them on the floor like E.T's Reese's Pieces, Brian manages to capture the most dangerous game: Howie Mandel.

Mandel plays a monster named Maurice, and by that I mean "Mandel does a really annoying impression of Beetlejuice for 90 minutes." The two become friends, and we learn that apparently a monster's job is to go around being a total dick to children. Together the two of them go around the world causing thousands of dollars of property damage to the homes of random people, letting the kids take the blame for it. 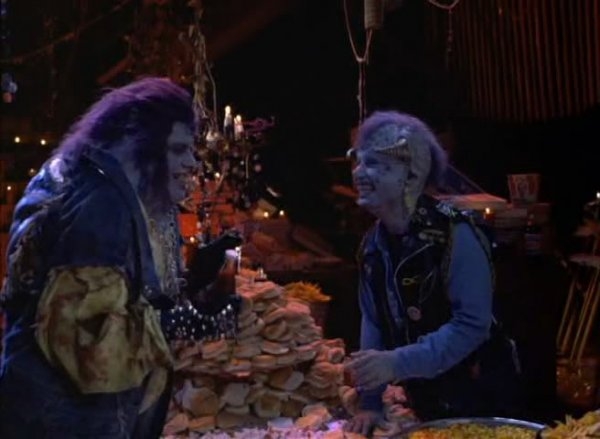 This is what Clive Barker's Nightbreed would be like if it was a Saturday morning cartoon.

Let's pause the plot summary here for a bit. Even for the weird morality of '80s movies, it is hard to imagine a less likable pair of protagonists than Maurice and Brian. In fact, the first time Brian meets Maurice, he proceeds to flat-out MURDER him. After learning that light is Maurice's weakness, Brian refuses to help as Maurice melts before his eyes and begs him for mercy as he dies. Brian's response is "No! YOU RUINED MY BIKE!" The kid is a sociopath.

Of course, Maurice doesn't actually die, but Brian doesn't know that! Their entire relationship is based on Maurice recognizing a kindred spirit, someone else who sees nothing wrong with ruining other kids' lives for no reason. Hell, there's even a montage of angry parents. One of these kids was getting the belt for sure, and Maurice knows it. He even describes his business as "We do the smashing, you get the thrashing!" Ha ha! Child abuse is hilarious!

Speaking of which, there's a very odd and incredibly blatant pedophilic subtext to this movie, which shouldn't be surprising considering it's about a creature who goes into children's rooms and messes with them while they sleep. A creepy humanoid female monster comments on Brian's 12-year-old ass when Maurice pulls off his pants against his will, and that's just one example. Our villain is the ruler of Maurice's land, a greasy man simply called "Boy" who kidnaps children and holds them in his land under the bed until they are broken and unrecognizable. (By the way, the final showdown with Boy is one of the strangest things I've ever seen in a family film. I'm a grown man, and some of these points made me yell "JESUSFRIGGINHELL" at the TV. It's basically Baby's First Cronenberg.) Hell, Maurice makes a child drink his pee. It'd be a prank if it were a kid doing it another kid. A grown-up-like monster doing it to a child makes it borderline felony.

Unlike most movies, this one doesn't even have the defense of innocence. The film is filled with one-liners like Maurice saying "Ah! A man's best friend! His right hand!" after turning his right hand into a dog. The land that Maurice essentially kidnaps Brian to is one of the most terrifying fantasy lands imaginable. It's basically just red lights, fun house mirrors, and creepy ladders. You know the M.C. Escher castle in Labyrinth? Well, imagine the crack-slums outside of that castle, and you'll understand.

What makes this worse is that this movie has the smell of 45-year-olds saying "Hey, kids like this stuff, right?" For reasons I can't understand, Brian spends half of the movie in hilariously oversized suit pants, and the kids say lines like "No closet? This is strictly an under-the-bed phenomenon." Maybe in 1989 kids dressed like David Byrne and talked like they were written by Aaron Sorkin, who knows. All I know is that this movie only allows itself to be called a kid's film so it can still blame stuff on magic. Magic is the cheapest cop-out plot point you can put in a movie, because once you introduce magic, you're allowed to get away with anything. You can even end the movie with a Deus-Ex-Howie-Mandel-With-A-Flamethrower if you want.

Look, I know parts of what I'm saying might make Little Monsters sound awesome, but I assure you this is not the case. An actual director or an actual cast could have done something with these ideas, but instead we have a weak Beetlejuice ripoff that's a little weirder and a lot less interesting. It will draw you in slightly as you wonder "How did this movie even get made?" Then you'll realize that the answer is "cocaine." Mystery solved. Except for the the mystery of why you're still watching Little Monsters, obviously.

MINORITY REPORT: When will you learn that putting yourself into the hands of people on the internet never ends well? I did warn you. I fired tons of warning flares into your bedroom while you slept under your Captain America bedsheets, but you misconstrued it as an act of arson. You've nobody to blame but yourself. - Ian "Professor Clumsy" Maddison