EXPECTATIONS: Seeing Jon Favreau's name on a project is such a guessing game these days, it's impossible to really know what to expect. Maybe I'll get the fun, interesting Favreau that made Zathura and Iron Man, or I could possibly be getting the boring, uninspired company man that made Iron Man 2 or Cowboys vs. Aliens. It could go either way, but this looks to be a personal project for Johnny Fav-Aces, and I honestly like the dude so much that I am willing - and wanting - to give him the benefit of the doubt.

REALITY: Part of being a writer and critic means identifying your biases and working around them, accepting them, or making them your trademark. Even the best critics will fall victim to "I like X, this movie has X, so good job, movie!" Roger Ebert is the most well-known and respected critic of all time, and even he would guarantee at least two stars to any movie which prominently featured a pair of sweet tits. I say this because Chef features many elements from my personal checklist: Road trips, defense of critics, Scarlett Johansson, thinly-veiled movie making metaphors, and fatherhood issues. (Y'know, like Godzilla.) Maybe I'm getting harder to please in my old age, but it seems unfathomable that Jon Favreau could create a film that combines so many things I normally love and still come up with something I'm so lukewarm on. 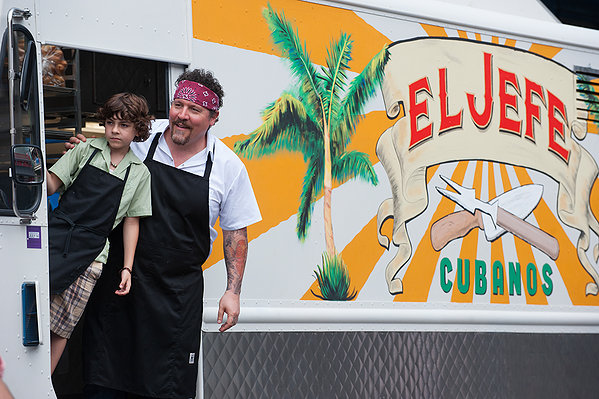 This is a metaphor for making this movie.


The titular Chef in this case is once-respected LA kitchen-runner Chef Carl "El Jefe" Casper (Favreau), who suffers a very public meltdown after being savagely reviewed by top food critic and former fan Ramsey Michel (Oliver Platt). After making the situation worse on himself via the magic of social media, Carl quits his job over creative differences with his boss (Dustin Hoffman), and desperately agrees to take a trip to Miami with his ex-wife Inez (Sofia Vergara) and attention-starved son Percy (Emjay Anthony). There, he is inspired and purchases a food truck so he can begin cooking his own meals, which sets us up for the road-trip portion of the film, as Carl and Percy are forced to bond as they drive the truck back to California with the help of Carl's best friend Martin (John Leguizamo). Basically, it's A Goofy Movie and Ratatouille combined, but doesn't achieve its goals as well as either of those literal children's films do.

One of the key elements I did enjoy in this film was the full understanding of social media and the power it wields. It avoids the annoying "it went viral on YouTube lol it has like a bajillion views herrdurr kids and their phones amirite" laziness that we normally get because apparently Max Landis is the only screenwriter in Hollywood who understands how Twitter works (as he reminds us at every opportunity). Instead, the movie embraces it as a destructive and a creative force, and it actually gives Percy, the easily-shoehorned child character, a purpose and role in the food-truck team. Carl realizes that his food truck's success (and his initial downfall) comes from his son's understanding of the world around him, and this gives them an opportunity to bond over something. Unfortunately, these father-son scenes are oddly inconsistent, only really hitting about half the time and feeling incredibly forced the other half.

Chef Carl is definitely the best performance Favreau has ever put in, and this is the most personal film he's ever made. It's also very clearly an analogue to Favreau's experience with Marvel Studios. (That's right. Even when we're not talking about superhero movies, we're still talking about superhero movies.) Carl gains negative reviews after the restaurant's owner stifles his creativity, telling him "Just do the thing you did last time." Feeling creatively bankrupt, Carl quits and makes an independent film - I mean, buys his own truck. It's smaller and will make less money, but at least it's totally his. Just to make this point abundantly clear, Favs squeezes in unnecessary appearances by RDJ and ScarJo, and even creates a character who is forced to stay in the kitchen after Carl's departure - and names him Tony (Bobby Canavale). 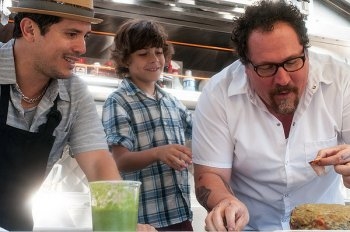 I don't see the issue, it looks like you're all having a great time.Chef also inadvertently addresses a directly personal theme: The relevance of the critic in the age of social media. Oliver Platt's portrayal of Ramsey Michel is one of the most sympathetic fictional critics in the history of film, or at least since Ratatouille's Anton Ego. During a later confrontation between the two, Carl (here basically just being Jon Favreau himself) calls Ramsey out, claiming Ramsey doesn't care about the creators he reviews, and Ramsey calmly argues "that's not really true." Ramsey likes and respects Carl, much in the same way I and other critics like and respect Jon Favreau. He just was given something that he couldn't personally back, and wanted Carl to do better. However, and remember this is Favreau explaining his real-life experiences to us, Michel's review had nothing to do with Carl's later success, and very little to do with his career downfall. The film ends with Carl/Favreau accepting and admitting that, even though it really mattered very little in terms of commercial success, criticism ultimately made him better as a creative artist, both directly and indirectly.

So here's me taking Oliver Platt's part: Favs, if you're going to make a movie that's very clearly about you, then just go all the way with it. We just expect passion projects to be a little self-serving, and the weakest parts of this film are the bits where Favreau pretends this is more than just "Why Marvel Sucks: The Favreau Story." The father-son and husband-wife issues presented here just seem forced, like he clearly didn't care as much about them as the rest of the movie.

There's so much good stuff going on in Chef that it's particularly disappointing how disjointed it becomes. Favreau's camerawork is excellent, but after a while it comes off as a series of Food Network reruns. Leguizamo and Vergara are both charming and funny, but aren't given any material to play with. Essentially, the film comes across as humbling and apologetic, almost painfully so. The audience's ultimate enjoyment of the movie depends entirely on how up-his-own-ass you think Jon Favreau comes across right now. Much like Ramsey Michel, I wanted to back this, but there's too many inherent issues with this meal.