EXPECTATIONS: I have to admit, Maleficent is my most anticipated film of 2014. The reasons for this are two-fold: firstly, I love the sense of rebellion in the brilliant trailer and, secondly, I am six years old.

REALITY: At its heart, Maleficent is a retread of a lot of the same ideas we saw explored so well in Frozen, but with a good streak of anti-royalism and a dreamlike structure that turns a decades long tale into a tight 97 minute narrative. All in all, it's pretty damn good.

A young fairy who protects the magical moor from the warmongering humans who live in the nearby valley one day meets a young human boy. Prejudices are destroyed and boundaries broken as the two bond and grow up with a fondness for each other. The fairy grows up to be Maleficent (Angelina Jolie) and the boy Stefan (Sharlto Copley). After the human king starts an all out war with the fairy folk, Stefan betrays Maleficent and steals her wings to gain the king's favour in order to become his successor. Angry and vengeful, Maleficent puts a curse on Stefan's first child Aurora that ensures that on her sixteenth birthday she will prick her finger on a spinning wheel and fall into a coma, only to be awoken by "true love's kiss." 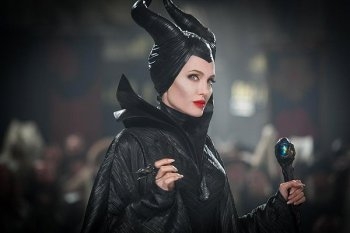 I'm thinking of having my cheekbones enhanced too.

The real meat of the film is built not around the rivalry between Maleficent and Stefan, but in Maleficent's relationship with the young Aurora (Elle Fanning) as she grows up. Maleficent observes her every move for sixteen years, protecting her repeatedly from harm until they finally meet face to face. Aurora mistakes Maleficent for her fairy godmother, always looking out for her. Maleficent is moved and takes steps to break the curse, but she knows it is hopeless because, in her own words, "true love doesn't exist."

Of course, you probably know where this is going, especially if you saw another Disney movie fairly recently. That said, it certainly is a message that bears repeating and I like the idea that Disney are intent on letting us know that the kind of narratives they used to feed us in movies like Sleeping Beauty don't have much of a place in the modern world. If a platonic or familial love can trump romance, there's no reason to keep pushing the "find your one true love and then get married and have your own kids so they can do the whole thing all over again" in an era where most people can't even dream of actually being able to afford to settle down.

Flying in the face of the usual narrative conventions is the main agenda of this movie. The idea of being inherently good or evil is thrown out of the window in favour of more complex character motivations. Yes, Maleficent herself is coloured as being evil by Stefan after the whole cursing incident, but she only did that out of vengeance for his betrayal. He probably did love her at one time, but chose his allegiance to his king and his own self-preservation over this love. Then he is eaten up by paranoia about Maleficent's eventual return and becomes obsessed with protecting his reign over the wellbeing of his subjects. Monarchs, who needs 'em?

Jolie and Copley both do excellent work selling these morally conflicted characters. Jolie is surprisingly understated, especially in comparison to how this character is portrayed in the original Sleeping Beauty. Because the dialogue is often minimal, Jolie underacting doesn't always land, particularly during moments of comedy. I would have liked to see her chew some more scenery in this, but I like the imposing physicality she brings to an often silent role.

This is extremely hazardous. Someone should get sued.


In contrast to this, Sharlto Copley is off the flipping hook. Mangling his mouth around an extremely over-embellished Scottish accent (I have no idea why all the humans are Scottish in this movie, given their history with anti-royalist sentiment) and yelling at his soldiers as he becomes progressively more insane and obsessed. Between this and Elysium, Copley is making a name for himself as a brilliantly crazy movie villain and I hope to see him continue in this vein.

Unfortunately, a lot of the rest of the cast don't fare so well. Elle Fanning is tragically uninteresting as Aurora, but she isn't really a character who is going to stand out seeing that her entire reason for being is to fall asleep before the third act. Three characters I haven't mentioned yet also fall a little flat, these being Aurora's pixie babysitters (Imelda Staunton, Lesley Manville and Juno Temple) who seem to be present only to pay homage to the original movie, but are not as funny as they should be. In fact, most of the humour in the film falls a little flat, which is by far its biggest failing.

Some things that do work extremely well are the incredibly rich visual approach. Do you remember how Hollywood in the nineties was always putting out really bold and almost unjustifiably expensive-looking epics like Judge Dredd, Johnny Mnemonic and Waterworld? Maleficent has a similar boldness in its design, only it's actually good. There is a recurring motif of actions effecting the world around the characters, often realised with spectacular visual effects happening around the actors as the scenery is corrupted or destroyed. I'm glad we can have 97-minute long fantasy movies that are prepared to present ideas to us in extremely overt and visual ways. All-in-all, Maleficent is great cinema, even if some of the elements don't quite work.

MINORITY REPORT: Its always a pleasant surprise to see The A-Team's Sharlto Copley pop up in movies. Even when he's being an obnoxious little shit in crap like Oldboy, I just enjoy seeing that kid go places. - Joseph "Jay Dub" Wade