EXPECTATIONS: The very best thing to come out of the success of The Hunger Games is Hollywood carpet-bombing the landscape with fifty more films just like it. Let's snatch up every tween book about post-apocalyptic dystopian city-states and smash them into an action cinema mold for the moms, dads and 20-something film critics in the audience. I sincerely hope the tween-ness of this particular tween adaptation doesn't make Divergent an unbearable slog, but at nearly two-and-a-half hours, "unbearable slog" is probably a given. 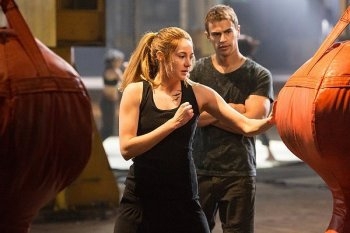 REALITY: Every teenager's worst nightmare is worrying about how they'll fit in wherever they wind up after graduation. Leaving mom and dad behind; becoming your own person; squashing a coming rebellion should the need arise; you know, typical teen drama. Every film based on a YA novel about post-apocalyptic dystopian city-states kinda winds up being about that too, whether it wants to or not. In the case of Divergent, director Neil Burger takes the story's hamfisted sci-fi caste system, strips out all semblance of narrative structure and leaves us with a film as pleasant to watch as it is impossible to parse.

Divergent takes place a hundred years after some future nuclear war in the far off dystopian land of Chicago, Illinois. There, the people have been segregated into five personality groups based on a different SAT vocabulary word: Abnegation, Amity, Candor, Erudite and Dauntless. At a certain age, teens are administered a personality test to determine which of the five groups they are most suited. This really doesn't seem to matter, though, because the next day they're allowed to choose whichever group they want. Later, we learn that if a teen can't cut it in their chosen group, they are cast out and forced into a lifetime of homelessness. Fantastic.

When Abnegation graduate Tris (Shailene Woodley) is tested, the results say she is 'Divergent', having the ridiculous ability to exhibit multiple personality traits. The next day, she elects to join Dauntless, the class of people tasked with defending the city. Dauntless are crazy thrillseekers whose primary mode of transportation is hurling themselves out of moving vehicles. Under the tutelage of instructor Four (Theo James), Tris learns to hold her own in a fight. Soon, she learns Erudite leader Jeanine (Kate Winslet) is planning a coup to overthrow and destroy the people of Abnegation, who currently govern the city. Tris and Four must find a way to thwart Jeanine's coup and save Tris' parents (Ashley Judd, Tony Goldwyn). 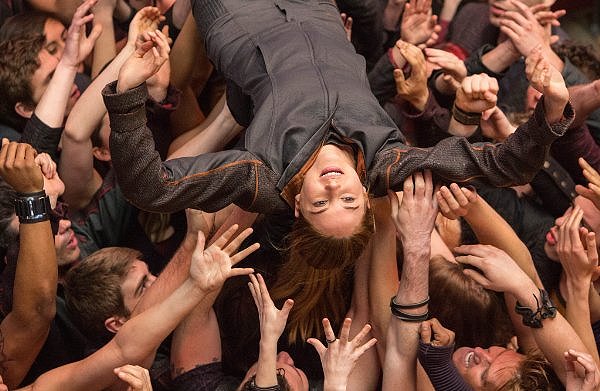 Hooray, look at how divergent you are!


At the risk of pulling back too much of the film critic curtain, this is the kind of plot summary that drives me up a fucking wall. Before I can actually relate the course of events, I have to define ten different terms and explain intricately staged setups that ultimately don't mean anything to the actual plot. Films like Divergent force me to frontload my own review with worldbuilding, and I wholeheartedly apologize for making you read the above two paragraphs. There are other characters and plot threads to potentially discuss, but what's clear about Divergent is that the film values its own brilliant premise above all of them.

So let's talk about that, then. Splitting a society into five social castes based on personality is how a high school freshman would plot to take over their school. This particular freshman has apparently never observed a typical student body, nor any movies that claim to depict one. "The selfless kids that everyone hates get elected to the student council. Then, the brainy poindexters try to get them expelled by using the football team as their own personal bodyguards." That's actually the entire plot of the movie in two sentences, and none of it makes any goddamn sense. The story seems to recognize this, though, and fills any and all plot holes with a liberal application of mind control serum. 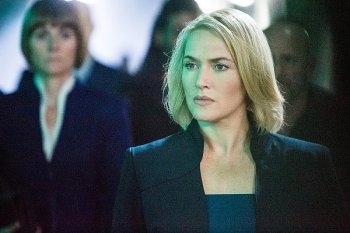 I do wish you would stop diverging.On top of this narrative junkheap, add the idea that Divergents are to be shot on sight. This concept takes a distant backseat after Tris joins the Dauntless clan. Most of the film's running time follows Tris in her training to become a soldier. She uses her added personality traits to get a leg up on the competition, because not being a single-minded tool makes you a special snowflake that can do anything. Tris is never in any danger of being killed, though, because another added benefit of being Divergent is having enough self-awareness to not out yourself as Divergent. (And yet somehow, Divergents are shot down left and right.)

The personality test itself is less an INFJ survey and more like a hallucinatory jaunt through the X-Men's Danger Room. These are the most entertaining scenes in the film, completely by virtue of the fact that we're no longer trapped in a boring, dystopian metropolis. Well, technically we are, but at least now we're in Inception-land where anything can happen. Most of these scenes find Shailene Woodley in a field being chased by crows and fire, but at a certain point I'll take whatever visual stimulation I can get.

For their part, the cast actually does a decent job of selling us on this whole mess. Most, like Zoe Kravitz and Miles Teller, don't get much to do besides standing back and letting Tris do her thing, but they make the most of their thankless roles. Jai Courtney stands out in particular, playing one of the Dauntless instructors. His character looks like someone shoved Macklemore headfirst through a belt sander, but he comes off as the most entertainingly smug shitheel Future Chicago has to offer.

The problem with Divergent is that, ultimately, this film is tailor-made with sequels in mind. The entire conflict between Erudites, Dauntlesses and Abnegations amounts to little more than thirty minutes at the end of the film, but it points to more conflict and more sequels to come. That leaves us two solid hours of setups and foreshadowing with a half-hour coda of bloodless shootouts. So if you're a fan of worldbuilding and dystopian social dynamics designed for tweeners, all set to the dulcet tones of Ellie Goulding, then go see Divergent. At least then we'll all know where to find you.

MINORITY REPORT: That those personality groups aren't represented by five adjectives or five nouns - instead, we get two and three - bothers the shit out of me for reasons I can't quite articulate. And if you're going to reunite Shailene Woodley and Miles Teller, at least make a sequel to The Spectacular Now. I hate this movie already. - Sean "Keanu Grieves" Hanson