Need For Speed; Knights of Badassdom; The Grand Budapest Hotel

EXPECTATIONS: Wes Anderson is a director who has very much carved out his niche. Nobody, at this point in his career, is on the fence about whether or not they like his work. I'm on the side that likes it, and I have a pretty good feeling that I'm going to continue to do so. You can probably guess how this review is going to turn out based on that.

REALITY: The Grand Budapest Hotel is certainly an unusual film. Your enjoyment of it will certainly depend on how much patience you have for Anderson's particular brand of whimsical picture-book framing and archaic adventure novel nostalgia. Underneath all of that is a very sweet film about the nature of storytelling, the people who tell stories and their subjects. 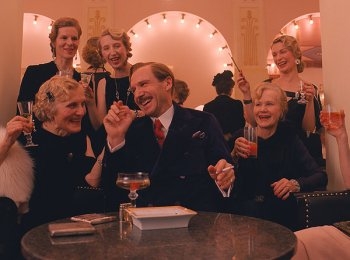 How jovial and whimsical.Rather than give the kind of brief, one paragraph plot summary that I would normally do, it feels more apt to begin with a description of the manner in which The Grand Budapest Hotel goes about its own telling. We begin with a young woman standing before the memorial of her unnamed Eastern European country's greatest author. She begins reading a book written by him, checking his biographical details on the back. We cut to the 1980s, the author (Tom Wilkinson) is making an instructional video on the origin of stories. Between interruptions by his playful son, the author begins to recount the story of how he came to hear another story. We cut to the 1960s, the young author (Jude Law) has a serendipitous meeting with the owner of the now run-down Grand Budapest Hotel. The owner, Zero Moustafa (F. Murray Abraham), invites the young author to dinner and tells him the story of how he came to own the hotel, that story focussing heavily on his relationship with the hotels previous conciérge.

Thusly are we introduced to the film's elaborate adventure/mystery/thriller plot. Grand Budapest conciérge M. Gustave (Ralph "Rafe" Fiennes) has a habit of romancing the elderly women who stay in the hotel, chiefly Madame D. (Tilda Swinton). While training the new lobby boy, the young Zero (Tony Revolori), Gustave hears of the death of Madame D. The pair then rush to the reading of the will, resided over by lawyer Deputy Kovacs (Jeff Goldblum). Much to the dismay of Madame D.'s greedy son Dmitri (Adrian Brody), one priceless painting has been left to Gustave. In another twist, it turns out that Madame D. was murdered and Gustave has been implicated. Arrested and jailed, Gustave must rely on Zero and his girlfriend Agatha (Saoirse Ronan) to liberate him, but they have the murderous brute Jopling (Willem Dafoe) and the righteous Inspector Henckel (Edward Norton) hot on their heels.

Now, there are a few niggly little issues with The Grand Budapest Hotel. For starters, Gustave himself is constantly talked up as being a great and interesting man, but written and played like a silly old fool. He writes and recites poetry that few have the inclination to listen to, but the very fact that he does this at all is talked up as somehow amazing. He's awful to women, but is treated like some kind of a romantic soul. This disparate tone is in keeping with the rest of the film and I have to assume that it is deliberate. 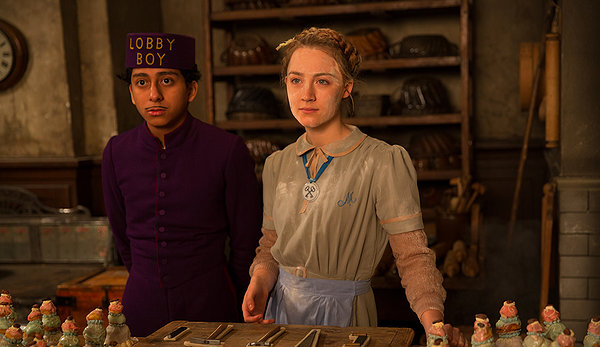 How quirky and carefree.

This is Anderson's first real foray into shocking violence, but even a suspenseful sequence culminating in a brutal murder is delivered with the same whimsical flights of fancy as everything else. If you've ever seen a Wes Anderson film before, you can guess what it looks like. Everything is is a puppet show, filmed in a doll's house, when you're Wes Anderson. His style has reached a point where he has very much perfected it in the sense that he has reached the peak of what he has hoped to achieve. His camera maintains a precise stillness while energetic actors bound about the frame. I can't help but feel, however, that Anderson's brand of deliberate stylisation has begun to stagnate. His admittedly sumptuous visuals feel all too familiar and his cast are starting to look like the returning members of a boy's club.

But, I still can't help but feel that this disparate tone is deliberate. Done to draw attention to the film's most interesting idea, which is that the story itself is somehow less important than its telling. With its three narrators (Wilkinson, Law and Abraham), each of whom have their section presented to us in different aspect ratios to highlight the different time periods in which they take place. Of course, Law and Wilkinson are merely relating to us a time in which the story was told to them, which is what makes it so interesting. Law narrates the tale as told to him that night and Wilkinson is the older version of that character recalling the tale from his writings, which are read by the nameless young woman whose presence bookends the film. Who will she go on to tell? Wes Anderson perhaps? Then I see the movie he makes and write a review.

This is what sets The Grand Budapest Hotel apart from Anderson's other works and lends itself to a genuinely poignant ending. The film essentially leaves the ball in your court to continue making, telling, hearing and embellishing stories until you're dead. If you can get past a style that is beginning to grow tiresome, there's definitely a lot to get out of The Grand Budapest Hotel.

MINORITY REPORT: This reminds me of a story I heard once, from a man who heard a story about a man who hears stories. One of the stories he heard about hearing about being told was about a storyteller who told stories that he had heard. I forget what it was about, I was in a mild hallucinatory state at the time. - Montague "Legally Sane" Smythe