EXPECTATIONS: First of all, if you're not at least vaguely familiar with the Human Centipede movies, close this window and go enjoy the rest of your life in blissful ignorance of these films. Go pet your dog or make some hot chocolate or watch the Carolina Panthers lose or something. Do something life-affirming. If, however, you do know what the Human Centipede is, then by all means keep reading. Your mind has already been sullied and nothing I say here will disturb you in the slightest.

That said, the original Human Centipede was a perverse concept treated with the kind of sincerity that you really only see in a movie with the tagline "100% medically accurate." Despite the outlandish premise, it was fairly by-the-numbers when it came to actually grossing out its audience. I've heard director Tom Six elected to ignore his impulse for restraint this time around. Oh boy, I can't wait...

REALITY: You know the scene in Texas Chainsaw Massacre where the guy runs up to a door, and then Leatherface pops out and whacks him with a hammer? The Human Centipede 2 (Full Sequence) is that scene stretched to a horrifically interminable 88 minutes. While it's not necessarily a terrible film without any redeeming moral value, it's certainly the torture-porn genre taken to its most grotesque, juvenile limit.


The Human Centipede (First Sequence) starred Dieter Laser as a mad German scientist bent on sewing three people together ass-to-mouth to create one long digestive tract. His reason why is still a bit unclear. (Full Sequence) opens with our main character, Martin (Laurence R. Harvey), watching the end of that film for what must be his hundredth viewing. Martin, a middle-aged, mentally damaged security guard, is the film's biggest fan. He even made a scrapbook dedicated to the film and the medical procedure found therein. We soon learn that his dream is to create a full, 12-person human centipede. Martin rents out a warehouse, and with his twelve random victims in tow - among them actress Ashlynn Yennie, who starred in the first film - he sets about creating his masterpiece. 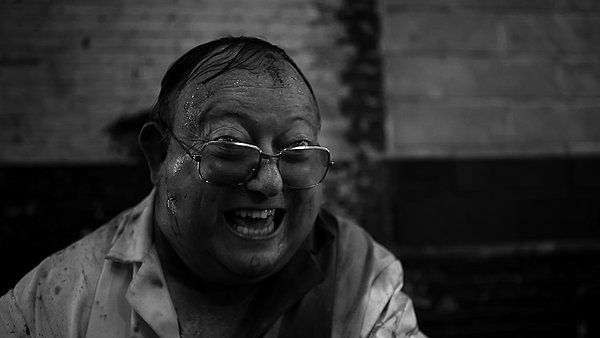 Much like this film in relation to the first, Martin's human centipede is much less elegantly designed. Martin shows none of the technical prowess of Deiter Laser's Dr. Heiter, nor does he have the surgical tools to properly pull it off. The result is a ramshackle nightmare that is held together with staples and duct tape. Critics often like to use that analogy to describe just how poorly made a film is, but this time it appears to be literally true. And when you use industrial staples in place of a properly sewn suture, things are going to get quite messy indeed.

Of course, that's not to say that Tom Six's skills as a filmmaker have gotten worse (though one could argue). If anything, Six is showing us just how strong a film his original Centipede actually was. This time around he's stripped down the visual design to a stark black-and-white-and-brown color scheme. The chatty Dr. Heiter has been replaced with a mute, uncharismatic blob of a human being, and the gory mayhem has been increased exponentially. If I didn't know any better, I'd say Tom Six is trying to tell us something about the nature of horror sequels; namely that they're generally not as well-crafted as the original and seem to always sacrifice genuine scares for over-the-top kills.

And that is certainly the case in this film. Where death was never really at the heart of the original Centipede, it pervades this sequel. While Martin's methods of murder aren't always as elaborate as sewing people together and waiting for them to die of exhaustion, they're more gruesome by an order of magnitude. He dispatches his own mother with a crowbar, for example, but not before forcing his pet centipede to bite her in the face, and then repeatedly striking her with the crowbar. The black-and-white prevents this film from becoming a sea of red stains, but in its place are some particularly grisly disfigurements.

What is Martin's ultimate goal beyond creating a human centipede? Once he's completed it, what does he plan to do? He may just kill it and start over from scratch. He may eventually wind up getting caught. That the film leaves things open and ambiguous is the real horror of (Full Sequence). Martin is a villain so pitifully mundane, yet at the same time so incomprehensibly horrifying, that he becomes a character of Lovecraftian proportions. Though the film attempts to explain Martin's psychosis, there is always the sense that something much darker is lurking just underneath. I couldn't help but think of Kiyoshi Kurosawa's Cure and the way that film illustrates the notion that violence inevitably begets more violence. Speaking of which, the director has already announced that he'll film his third Centipede in the US, and he has promised to show audiences what true outrage looks like.


(Full Sequence), then, winds up becoming a bizarre parody of what Tom Six's critics had to say about his first sequence. "Oh, it's a ridiculous premise, the gore is nonsensical and over the top, it's morally reprehensible, blah-de-blah-de-blah..." The problem is that if you're going to parody something, even if it's yourself, you generally need to do it in a sly, mocking manner. There's never a wink-wink moment in this film to suggest that what Six is doing is anything but being a childish reactionary. When Martin completes his centipede and dances around it like a deranged carnival barker, I could nearly hear Six in the background screaming "This is what you wanted, isn't it!? You wanted a full carousel of poop-horror?! Well here it is, you sick bastards! I hope you eat it up and I hope you like it!"

MINORITY REPORT: In the UK, this film has been deemed so horrific that it has been banned from all distribution. Thing is, that just makes me want to watch it and its predecessor even more. I guess there really is no such thing as bad publicity after all. - Ian "Professor Clumsy" Maddison