EXPECTATIONS: The Three Musketeers is one of those timeless stories that stands up to countless re-adaptations, but Paul W.S. Anderson and I have a tumultuous past. Is this really the man we want directing this tale of swashbuckling adventure and hilarious debauchery?

REALITY: You know what? I apologise. Maybe it's the strength of the source material shining through, but The Three Musketeers is not all that bad. This feels like the classic tale, but it presents its high-adventure thrills with a thoroughly modern helping of exactly the right kind of ridiculousness. Unfortunately, it's rather inconsistent, having trouble deciding if it wants to be a mindless Matrix-light or a period-piece take on the cleverly silly A-Team dynamic. 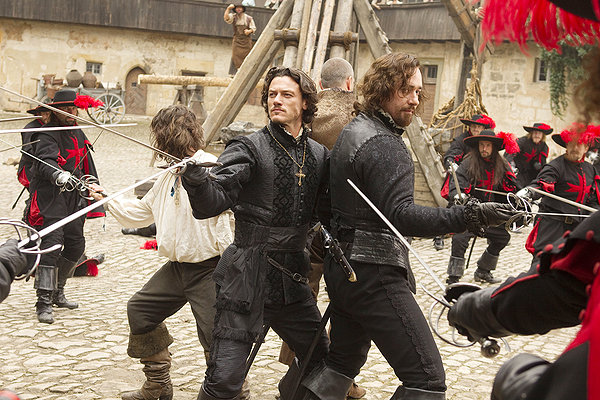 The infamous meeting of the Musketeers constitutes almost all of their presence in the film until the final act.

It is 17th-century France and the child king Louis XIII (Freddie Fox) hopes to forge a truce with the Duke of Buckingham (Orlando Bloom). However, the scheming Cardinal Richelieu (Christoph Waltz) has no interest in peace, so he employs Milady de Winter (Milla Jovovich) to plant the seed of doubt in the king's mind as to the fidelity of the queen, stealing the diamonds that were a gift from him and taking them to England and the hands of Buckingham. It's up to the Three Musketeers - Athos (Matthew MacFadyen), Aramis (Luke Evans) and Porthos (Ray Stevenson) - and their young initiate D'Artagnan (Logan Lerman) to track down the diamonds and return them to the queen for the good of France.

It all sounds very light, doesn't it? It is, in fact, based on only a small part of the original novel, choosing to leave the darker, more violent content for what I can only assume will be a plethora of sequels. What that leaves us with here is a lot of scheming, mustache-twirling villains all conspiring and stabbing each other in the backs over a plot to hide some jewellery. As such, very little is resolved in a satisfactory way in spite of all the swashbuckling action. 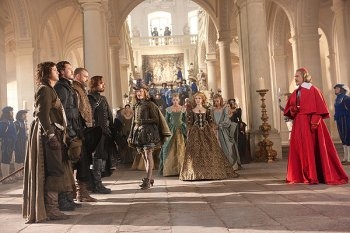 It's scenes like this that make for the best entertainment, though.The thing is, this film does not belong to its titular threesome at all. I guess Anderson felt audiences had seen it all before when it comes to the Musketeers themselves, so he dedicated his film to the myriad villains, giving it a Shakespearean air. Christoph Waltz is very understated and subtle as Richelieu, providing little in the way of surprises, but dominating the screen with his presence nonetheless. Orlando Bloom turns in a career-best performance, full of ham and theatricality. Mads Mikkelsen makes for an appropriately menacing Rochefort, tangling with D'Artagnan at every turn. It is Milla Jovovich's Milady that dominates the film's screen time, though, and I feel that this is one of its biggest weaknesses. That isn't to say that Jovovich's performance is particularly at fault, but some of the things that they do with this character just push things a little too far. Something as simple as opening a secret door to steal some diamonds becomes an incredibly elaborate sequence with Jovovich rappelling down palace walls and diving through a grid of cheese-wire. It all starts to give that sinking feeling of harking back to the nonsense of Resident Evil.

The other thing that Anderson's film focuses on is the romance between Louis XIII and his young Queen (Juno Temple). This is a smart decision, because the light plot just would not work if we didn't care about this relationship. These two young Royals are likeable, funny and engaging, so we don't begrudge them taking screen time away from the Musketeers. Maybe Anderson's strengths lie not in action, but in romance and comedy, which is why this film mostly works (and why so many of his others have not). However, just when you think that there isn't much in the way of adventure left to be had here, the film introduces its major gimmick: air ships. Ships that sail... in the air. Crazy, no?

It is here that the film introduces a self-awareness, throwing itself into the realm of absolute craziness for its third act with an extended sky battle that knows exactly how crazy it is and just embraces it. Not only that, but the visual effects are truly impressive. This film will be remembered for its air ships, not for being a particularly interesting adaptation of its source material. But, hell, this is Paul W.S. Anderson adapting Alexandre Dumas, and it's watchable. I'll take it!

MINORITY REPORT: If you told me ten years ago that the best adaptation of The Three Musketeers would be the one starring Chris O'Donnell and Charlie Sheen, I would... probably agree with you, because it would be 2001, and that movie would have been out for eight years by that point. Man, I'm old. - Martin R. "Vargo" Schneider