EXPECTATIONS: I have a sneaking suspicion that this film is being heavily mis-marketed and will turn out to be something totally different than what the ads promise. At least I hope that's the case. Because otherwise this is going to be a (500) Days of Summer-level Misunderstood Quirky Indie Romance with all of the sexist overtones of Weird Science thrown in and completely ignored. However, the fact that the film's female lead is also the screenwriter gives me a little hope, especially given that the male lead is her real-life boyfriend. I mean, she wouldn't write the father of her child to be a total creep, would she? That can't be good for the relationship.

REALITY: Well, I was half right. The marketing team on this film has delivered what may be the second-most poorly advertised film of the year. (The first being John Carter.) I'm glad this film seems to be aware of its inherent creepiness and addresses it, to the point where it's more of a romantic horror story than a romantic comedy. Every horror story must have its bad guy, and ours just happens to be the leading man. 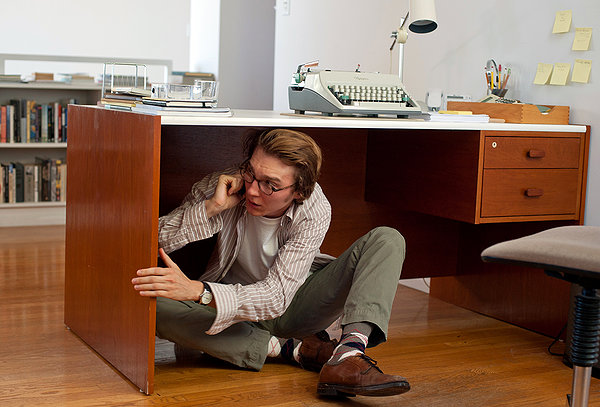 Paul Dano plays Calvin Weir-Field, a former writing prodigy who's having difficulty writing his follow-up novel. Actually, Calvin has difficulty doing everything, including meeting/talking to people. At the behest of his therapist (Elliot Gould), Calvin begins writing about the perfect person, and he continues writing about her fanatically until his dream girl Ruby Sparks (Zoe Kazan) materializes in his kitchen. And what better place for a dream girl to show up, right fellas? Am I right? (I am so sorry.)

After ascertaining that Ruby is real, at least in the "other people can see and touch her" sense, Calvin begins experimenting and realizes that he can make Ruby think and do whatever he wants by typing the words into a typewriter. At first he vows never to alter Ruby again, but when Ruby starts acting in ways that Calvin doesn't approve of, meaning "like an actual human being," Calvin takes it upon himself to correct this behavior.

Now, I don't usually like to over-explain the point of films in hopes that people will come to their own understandings and interpretations. But if you are watching Ruby Sparks, you need to understand something: Calvin is the bad guy. Calvin is a creep. I'm pretty sure there's a deleted scene where Calvin posts on the r/mensrights section of Reddit and cries about "friendzones" all night.

Dano puts in one of his best performances, to the point of being flat-out disturbing. The chemistry between Kazan and Dano isn't there as a romantic pairing, but rather as a horror movie villain and his victim. It's like dating Jigsaw. Even the music is a cross between Spielbergian fantasy and Exorcist-style horror tones. In one particularly disturbing scene, Calvin and Ruby have a fight and he reveals his power over her, and there's a sick combination of shame and joy on Dano's face as he controls her. The scene even ends on a shot of Ruby lying on the ground crying as though she had just been raped, though it may not count as "legitimately" in Missouri. 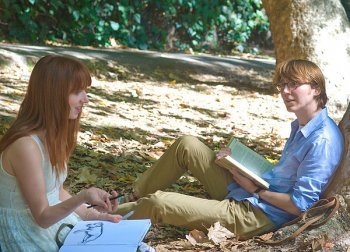 Oh, hello. I couldn't help but notice you engaged in something of lower intellectual worth than what I was engaged in.Husband-and-wife filmmakers Jonathan Dayton and Valarie Faris have created a film that is exactly aware of what it's expected to be and subverts these expectations, much like how their first film Little Miss Sunshine is the unofficial "indie movie for people who don't like/understand indie movies." At one point during a game of charades, one of the clues is "What Women Want." Y'know, the Mel Gibson film about the dude who has a magical power he uses to manipulate women? THAT'S how self-aware this film is.

Ruby Sparks recognizes the existence of the Zooey Deschanel-style Manic Pixie Dream Girl trope and goes out of its way to point out its stupidity and inherent creepiness. Until the denouement -- and this is where the film loses me -- in which Calvin gets his happy ending. Remember how at the end of (500) Days of Summer, JGL meets a girl named Autumn, and you audibly groaned and said "What the hell. Seriously?" It's kinda like that, except somehow even more irritating.

Calvin is essentially rewarded for his bad behavior in a way that almost seems to be counterproductive to the rest of the movie. It would be an easy fix, too. All they would have to do is spend five minutes less watching Calvin go "Oh, wowiee, is this real? This can't be real" and five minutes more showing him be repentant and learning his lesson and we'd be good. Instead, we basically have reassurance that you can be a controlling, abusive jackass and women will find their way back to you. (Oh, wait, that's kinda true, isn't it?)

Let me give you some dating advice, kids. (Because as a something awful dot com writer, I am clearly qualified to do so.) One of the worst things you can do to a woman is idealize her and put her on a pedestal. This makes it impossible for you to accept her faults, because she can never match up to the idea of the woman you've created in your head. Well, here we have a character who literally matches the woman in a man's head, and that's still not good enough. It's a cautionary tale, but I'm not sure what exactly Ruby Sparks is cautioning against. It could be against idealizing and mistreating women, or it could be telling you that what you want now, you might not want later. Maybe it's just telling us not to be douchebags. Or to go ahead and be douchebags. Or to feel bad because we were douchebags before and to go forth and douche no more. I'm going to go with that.

MINORITY REPORT: I know how Ruby Sparks must feel. I wake up every morning feeling like my entire life is being written by some unimaginative jackass. - Donovan Laird, Future Critic