EXPECTATIONS: Everything I have read about The Apparition makes it sound like a half-hearted attempt at combining the suburban nightmares of The Grudge and Poltergeist, but suggests nothing about what is supposed to set this film apart from either of them. Then again, everything I've read about The Apparition can be found in a single unsourced Wikipedia blurb. I haven't even seen a trailer for this film, so it could secretly be Ghostbusters III for all I know. I'm not counting on it, though. 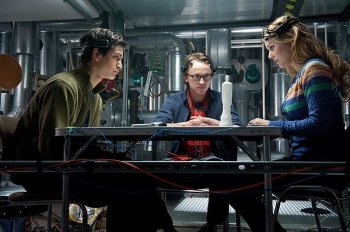 It's like Insidious, if Insidious was shit.REALITY: Few horror films are as short and as unambitious as The Apparition. This is an 82-minute film that gives us an interesting hook for a horror story and offers a number of thematic avenues to explore, but it pursues absolutely none of them. At times, this film seems like it doesn't even want to commit to its own premise. It is the film equivalent of a kid cutting a campfire story short with "and then they all die" because that kid sucks at telling stories.

In 1973, a team of parapsychologists conducted an experiment to see if they could contact the spirit world. Their success leads a present-day team of scientists to try repeating the experiment. Scientist Patrick (Tom Felton, in a rare non-villainous role) and his assistant Ben (Sebastian Stan) pull it off, except that the ghost they conjure winds up killing a member of their team. Guilt-stricken and self-exiled, Ben is living in a desert town with his girlfriend Kelly (Ashley Greene) when he discovers that the spirit has followed him and is now haunting his new home.

Logic and reason are two elements that kind of go out the window when you're dealing with a horror film. The entire genre is predicated on the idea that we fear the things we don't understand, so it makes sense for a horror film to withhold certain information until we absolutely need it. Where The Apparition fails as a film is in telling us nothing about the ghost until mere moments from the end credits. Or rather, the things we learn about the ghost are incorrect, because the characters in the film are scientists trying to quantify the supernatural. Our knowledge of the ghost comes from bad science and wrong assumptions, which, in a better film, would be a unique spin on haunted-house movies. Here, writer/director Todd Lincoln is just blatantly lying to the audience.

The ghost spends most of its time skulking about Ben and Kelly's house and manifesting itself in a number of forms, each completely different than the last, and none of them scarier than any naturally occurring household phenomena. It opens locked doors, grows disgusting mold patterns, and quietly kills their neighbor's dog. At one point, Ben discovers what looks like a giant hornet nest in his kitchen, but when he stupidly pokes at it with a broom handle, nothing happens. In fact, the very next scene shatters what tension they managed to build as we see him bagging it up and throwing it in the garbage. For a while, it seems as though The Apparition is going to turn into a horror film about the anxieties of being a homeowner. Nothing truly terrifying happens until the two flee their home for a hotel room, where we discover that the house isn't haunted. They are! There goes one interesting interpretation...

What little we do learn about the film's ghost we gather from its encounters with Patrick, who claims ghosts can be conjured through "channeled, intentional belief." While the scenes of Patrick fiddling with his Ouija machines threaten to steer the film dangerously close to Ghostbusters territory, they do bring up yet another possible avenue the film could have taken: the relation between science and faith. While the film's tagline ("Once you believe, you die") calls to mind Freddy Krueger more than anything else, it's made clear that having faith is the first step toward manifesting an evil spirit. Religious iconography doesn't enter the equation until nearly the end, and by that time we're too busy waiting for the ghost to either kill somebody or go home. It marks yet another possible theme that the film could have developed had Lincoln workshopped his script a little bit longer. 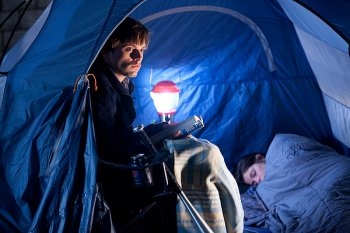 It's like The Blair Witch Project, if The Blair Witch Project was shit.There is no rhyme or reason for the things the ghost is doing until the closing narration that explains why everything we just saw made no sense. Part of it ties back into the film's notion that science doesn't understand the supernatural, but the longer the narration goes, the more we realize the ghost (and, by extension, Todd Lincoln) is simply being a dick.

I like the idea of a ghost actively trying to figure out what will scare us, but here it comes off as an excuse to pull a number of scary moments out of a hat, scribble a story around them, and then tell us through narration that it was all according to some grand plan. I could do the same thing with this review by tossing up a few bullet points, jotting down some notes in between them and then saying "And then they all died! Review done good!" but that's not smart writing. That's dumb writing; aggressively dumb. A good horror film (hell, any good film) presents a scenario with a solution that ties back into the rest of the film. The Apparition introduces the concept of Purgatory at the zero hour, because even though the film is well into the third act, it's still desperately searching for something to be about.

I'm man enough to admit that I am afraid of the things I don't understand, and that includes this movie. This movie terrifies me. I don't understand the choices writer/director Todd Lincoln has made here, I don't understand why the film's thematic core seems to shift focus four-fifths of the way through, and I really don't understand the way this film tries to define Purgatory. This film insults me on a critical level, confounds me on a narrative level, and frightens me on an ideological level. I was hoping this would be a subversive piece of horror filmmaking on the level of Crazy Eights favorite Insidious, but instead The Apparition is a complete and utter disappointment. Never has a horror film done so little work with so much material.

MINORITY REPORT: This whole "it's not the house that's haunted" gimmick has run its course. It was a novel concept when Paranormal Activity and Insidious did it, but now it's leaked down to a whole crop of movies that should be direct-to-DVD and ... I mean, can't we just go back to a plain old haunted house? There's a reason this trope has endured some 600 years in western literature: It works, and it's like Mad Libs for an infinite variety of scary shit.

While this "it's not the house that's haunted" bullshit has yielded two modern classics, it's quite limiting: Suddenly the writer must explain a) why the character hasn't dealt with this shit before now or b) how the haunting remained dormant before the first reel. Then again, maybe I'm expending far too much energy on a film the studio couldn't be arsed to reserve for October, when the good horror films come to theaters. -Sean "Keanu Grieves" Hanson