EXPECTATIONS: Wes Anderson's films are always a joy to watch. He somehow manages to tap into that small part of his audience that still retains a sense of childish wonderment. Seeing as he's now tackling the subject of juvenile romance, I expect this to follow the same trend and I am fully prepared to experience pure liquid joy.

REALITY: Moonrise Kingdom is just as joyous as any of Anderson's other films. They say some directors just make the same film over and over again, and you could definitely apply that to Wes Anderson, but Moonrise Kingdom feels a perfect culmination of his style and sensibilities. I can only wonder where he could go from here?

It is 1965 -- so we are informed by our Narrator (Bob Balaban) -- and two young children have fallen in love and decided to run away together. Orphan Sam (Jared Gilman) has quit the Khaki Scouts and made his escape, hunted by tenacious Scout Master Ward (Edward Norton) and morose police captain Sharp (Bruce Willis). With him is Suzy (Kara Hayward), who has had enough of her mundane family life and decides to leave her parents (Bill Murray, Frances McDormand) to take on a life of adventure. 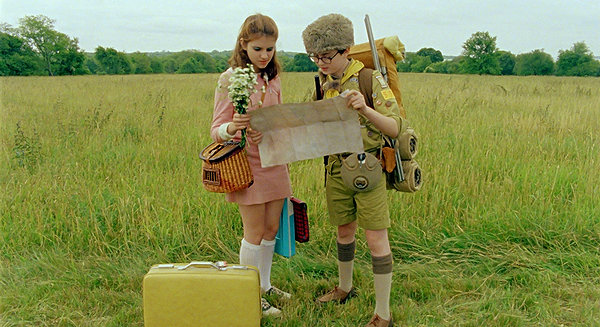 The world is your oyster!

This sometimes feels like familiar territory, highlighting the hypocrisy of adulthood and questioning when the yearning for freedom in childhood leaves you. The difference here is that Moonrise Kingdom is a rare example of a film that fully understands kids and what drives them as well as fully understanding what it is about adults that yearns for that wonder of childhood, even though they have more freedom as adults.

It's that freedom, or lack of freedom, that forms the heart of the film. As children we long for freedom, we want to gather together our favourite things, run off into the woods and live out our favourite adventure stories. As adults, the reality is much more daunting, and we get worn down, stuck in a rut and become our parents. Obviously, the fact is that a great deal of people grow up to become parents themselves, and they are doomed to repeat the mistakes that their own parents might have made. Sam, in spite of his tragic circumstances, is free to break away from this cycle, while Suzy wants to but doesn't have the opportunity to do so without Sam.

Together, these two characters form a perfect synergy that lends itself beautifully to the romantic aspects of the story, as well as to the central idea of exploration; both of the land and of oneself. One scene that could easily have made audiences uncomfortable, in which Sam and Suzy kiss and express vague awareness of sexual arousal, is played so innocently and sincerely that it works perfectly. 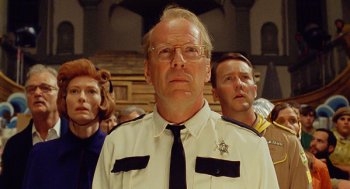 Your best days are behind you!The sincerity runs through every character in the film. Anderson seems to have built a world in which everyone answers questions with absolute honesty. I can't imagine any other film where lines like "I hope the roof flies off and I get sucked into space" or "I'm going to go find a tree to chop down" work so well, delivered as they are by a morose and sad-eyed Bill Murray. There's a hilarity and a sadness to almost everything in Moonrise Kingdom.

There's some excellent interplay between the adults of the film too. Suzy's parents are not a perfect synergy like Suzy and Sam are; in fact, you could say that they are too alike, brought together by their work. This is probably why Mrs. Bishop is having an affair with Captain Sharp, who is as wet a blanket as ever there was. Sharp himself becomes a father figure of sorts to young Sam, along with his other legal guardian Scout Master Ward. Both of these characters relate to Sam; they have a loneliness to them that they see reflected in the orphan boy.

It really is just a delight from beginning to end; a whimsical, magical and joyful expression on the importance of never losing your inner child and always maintaining your sense of wonder.

MINORITY REPORT: Finally! A talking animal movie I can look forw...what's that? This isn't a sequel to Mr. Fox? Well then just forget it! - Joseph "Jay Dub" Wade