Snow White and the Huntsman

EXPECTATIONS: Even after seeing what Tarsem Singh did with the Snow White story in Mirror Mirror earlier this year, I still wasn't entirely sure what to make of the trailers for Snow White and the Huntsman. Whereas Mirror Mirror took the fairy tale in a suitably whimsical direction geared more for children, this film looks like it's shooting for a Lord of the Rings vibe with epic battle scenes and loads of dark fantasy peppered throughout. Something tells me I'm going to find myself begging for a musical number before all this is over.

REALITY: The best thing I can say for Snow White and the Huntsman is that it isn't an unmitigated disaster. Granted, I said the same thing about Mirror Mirror and how the weird cultural pastiche actually kinda worked. In this case, however, I mean it more in the sense that this is probably as good an action-adventure version of Snow White as we're ever going to see. They commit to the concept 100%, but the downside is that Huntsman is still an absolute mess of a story with practically no interest in building compelling characters.

Once upon a time, an evil witch named Ravenna (Charlize Theron) married the King, killed him, and took the throne for herself. The new queen locked the king's daughter, Snow White (Kristen Stewart), in the tower until finally the girl escapes on her eighteenth birthday. When Ravenna's magic mirror tells her that eating Snow White's still-beating heart will grant her immortality, she sends a local drunkard (Chris Hemsworth) into the dark forest to find and bring her back. He catches Snow White, but soon agrees to help her fight the queen with the help of the king's loyal Duke Hammond (Vincent Regan) and a band of dwarves who only exist in this film because people would riot in the streets if a Snow White film didn't at least include a few dwarves. 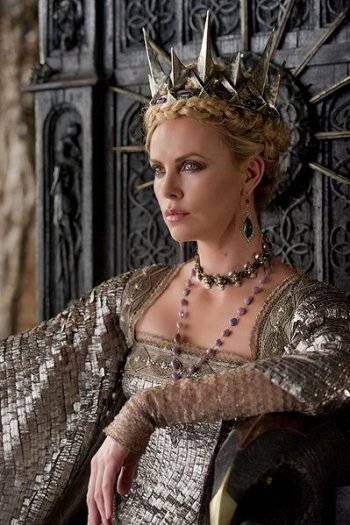 Wait, weren't you in that other movie just now?It's hard to fault the filmmakers for attempting a style reminiscent of Peter Jackson's Tolkien films, but so much of Huntsman just plain doesn't work. The decision to turn this particular fairy tale into a fantasy epic forces the story to take certain turns that may fit into the Hero's Journey mold, but wind up detracting from the plot. For example, why does the film have to identify Snow White as The Chosen One? She's The Fairest of Them All, but she's also now apparently the magical forest's version of Neo, with vaguely defined special powers to boot. Isn't wanting to exact revenge upon the queen motivation enough? Why tack on a Messiah complex to an already-crowded plot?

On the other hand, the choice to turn Snow White into a strong, pro-active character definitely makes sense. The script wisely forces the character's damsel-in-distress archetype to take responsibility for herself and her situation, particularly when the hero meant to protect her turns out to be a pretty awful warrior. (Seriously, the huntsman is the least helpful protagonist this side of Jack Burton.) Once we see the queen's resolve to kill anyone caught hiding Snow White, it becomes clear why she must stand up for herself; as long as her cowardice wins out, nobody is safe. Snow White doesn't need to stand up to the queen because of some prophecy; she does it because it's the only way to protect everyone else.

To match the bleakness of the story, the tone of the film is dark, dark, dark. It's dark to the point of being oppressive, and not in an "It's oppressively bleak just like the queen's reign, aren't I a clever film watcher?" kind of way. Gruesome creature designs and a washed-out color palette are one thing, but Huntsman is also an utterly joyless exercise from beginning to end. I can't believe I'm actually saying this, but this is a film in desperate need of some comic relief. Give us a little slapstick. Give us some snappy one-liners. Give us something, anything to break the depressing monotony of watching Charlize Theron magically murder people.

To put it another way, this film has eight dwarves at its disposal, a comedy goldmine if ever there was one, and the script can't even give them a sarcastic comment to chew on. Why bother even including the dwarves (and casting the likes of Ian McShane, Bob Hoskins, Toby Jones, and Nick Frost) if you're only going to use them to accomplish one task that any other character could have conceivably managed? Sure, I suppose that's why the film is titled Snow White and the Huntsman; it's not a film strictly about the dwarves, but for characters as iconic as these, one would think the screenwriters could have found something more useful for them to do. This was one thing that Mirror Mirror managed to get right: It introduced the dwarves as colorful, unique characters with a surprisingly deep backstory, and it made them key players in the overall plot. Here, they have all the narrative weight and screen presence of eight bumps on the same log. 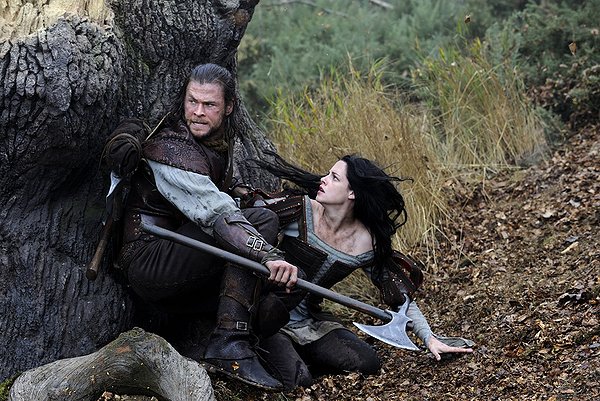 Ah, the title characters. Being all white and snowy and stuff.

Useless dwarves aside, the rest of the cast has its own share of problems. Charlize Theron is fine, terrific even, as the evil queen, but the film's titular characters don't fare nearly as well. At times, Kristen Stewart seems utterly lost in this film. When she's not struggling to feign a British accent, she appears just as confused by her character's Chosen One status as I am. Elsewhere, Chris Hemsworth appears to be stuck in Thor mode. His character's rage and angst are the same, only the source has changed. If he's not careful, Hemsworth is liable to wind up with Sam Worthington and Taylor Kitsch on the shortlist of top-billed actors nobody will remember next year.

When this year draws to a close, it will be interesting to find out just what the public consensus on the 2012 Snow White Experiment turns out to be. Mirror Mirror seemed to come and go without anyone really noticing, and this film feels destined to be swallowed up among so many other hugely anticipated summer films. I would argue that both of these films succeed in modernizing the Snow White character in two markedly different ways, but this one in particular has too much riding against it for big summer audiences to truly enjoy it. It tries so unbelievably hard to be Lord of the Rings that it winds up sort of turning into The Chronicles of Riddick by accident, and nobody needs that.

MINORITY REPORT: Why the hell do all the other critics think this is a movie about LITERAL beauty? I don't care if you'd rather do Charlize Theron than Kristen Stewart, you hack, your dick is not the one writing the review. Metaphors and themes exist, folks. They don't get you on DVD covers, but they do exist. - Martin R. "Vargo" Schneider