EXPECTATIONS: I remember when this movie was announced at the Academy Awards this year, in the Best Foreign Language Film category. There was an oddly awkward moment when the announcer's voice listed off the fact that this year's nominees came from the far-reaching lands of Poland, Iran, Israel and... Canada. They even pronounced it extra-slowly, as if it would distract the audience into thinking this film came from the exotic island nation of Kahneedoh. This ploy surprisingly did not work, and everyone watching was momentarily united in one thought: Canada doesn't count! This may be true, but the film is in French, and none of the characters are superheroes, so for American audiences, it might as well have come from Antarctica. Actually, you'd probably get more people to see it that way. Tell them there are penguins. People friggin' love penguins.

REALITY: It's hard to pinpoint when exactly it happened, but somewhere along the line Current Releases became children's advocates of sorts. Whether I'm explaining the horrible political implications of mo-cap films or Joe's pointing at the screen yelling that everything is wrong, we've become very much against films that insult the youngest generation. That's right. Something Awful dot com writers are protecting the world's youth, and there is no way that could backfire. I bring this up because Monsieur Lazhar, while not a kid's movie, is real and unafraid in its portrayal of how weird and scary childhood logic can actually be.

The Monsieur is Bachir Lahzar (Mohamed Fellag), an Algerian political refugee seeking amnesty who takes a job teaching sixth graders whose former teacher hung herself in their classroom, and I have no damn clue how to make any of that seem funny. Bachir has trouble fitting in at the school, and there are small conflicts with parents that have sprinkling of racism trickled in. ("You're not from here! How would you know anything?") However, the most interesting parts of the film focus on the children, particularly the outspoken Alice (Sophie Nélisse) and her friend Simon (Émilien Néron), whom everyone blames for their teacher's death. The actors are impressively strong, and the growth of their relationship is the most fascinating aspect of the movie, because it doesn't sugarcoat how weird and dark kids' brains can be, especially after tragedy. I'd complain that the children seem unrealistically attentive and well-read, but that might just be because I'm a product of the American public school system. 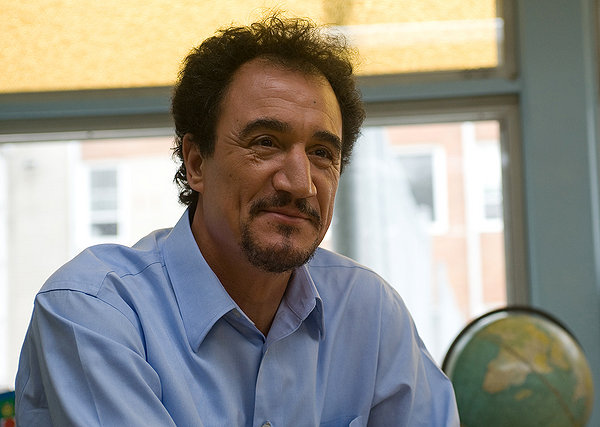 Ah, the title character. Being all Lazhary and Monsieury and stuff.

Speaking of which, this is a film that also embraces some of the challenges of teaching in the pubic system that "inspirational teacher" movies tend to gloss over. For example, the male faculty members complain about their lack of numbers, and the fact that they are constantly at risk of having charges brought against them for making any contact with a student. I've mentioned previously that, before becoming a Minor Internet Celebrity, I worked as a Teacher's Aide at an elementary school/junior high. (This is where I met Junior Critic Tommy Simmons.) I learned in my time there that being a man in an elementary school is like telling the internet you watch My Little Pony: Someone is going to call you a pedophile. There were two other male employees my age, and one father was actually so worried about the three of us that he took it upon himself to be present for every school cheerleading practice to make sure we weren't watching, because parents of pre-teens have absolutely no sense of irony.

Most teacher movies grossly misrepresent the amount of power teachers and administrators have in their own schools. Parents actually dominate the school system, and writer/director Philippe Falardeau understands this so well I'm convinced he must have worked in education before. (However, I should note that the reason this gets brought up in the film is that Bashir hits a kid upside the head, which is probably something teachers shouldn't do.)

There's a lot here that plays with our perception of how movies work. A female teacher is romantically interested in Bashir, but that storyline doesn't go anywhere. Early on, the film sets up a major conflict, a big secret that Bashir's hiding, and when it finally gets revealed, the movie is nearly over. There are no inspiring speeches, no overly cheesy music, no Mr. Holland's Opus-type moment. In fact the film doesn't even really go out with a bang, but rather a brief, bittersweet scene between a teacher and a student.

This simplicity adds a lot to Monsieur Lazhar's charm. It doesn't go out of its way to say "HEY LOOK! THIS IS INSPIRING! ARE YOU INSPIRED?" and is perfectly content to just lay down some characters and give us a story. The end result of this idea is a movie that's predictable, but still refreshing. Without any of the typical heartstring-tugging associated with this type of movie, the film's naturalism can feel a little underwhelming. You keep expecting a big life-changing moment that doesn't come. If you're looking for that, well... don't. Just enjoy the great actors and the surprisingly warm story about the little kids with the dead teacher. Hilarious.