EXPECTATIONS: Has anyone ever come up with the idea of a "Superman curse," explaining the bizarre phenomenon where terrible things happen to people who play Superman in live-action media? Either they die mysteriously, are paralyzed by a horse, or they have to be Dean Cain. Brandon Routh's punishment in this curse seems to be his amazing plummet of a career, which now seems to consist of making movies no one sees about things no one cares about, like Dylan Dog. Here, he's continuing this trend by making a film about a prep-school lacrosse team with the director of Z3, which we all know is the weakest of the "Zenon: Girl of the 22nd Century" trilogy.

REALITY: If you think about it, sports movies are pretty much perfect for smaller film studios, particularly ones literally named Sports Studios. In an example of art imitating life, simply by granting their own film a theatrical release, they are believing their own message. They're the plucky underdogs, holding their own against the big rich-kid bullies, who dominate over them with their budgets and actual actors. The ticket booth becomes the last championship scene, David vs. Goliath, with slo-motion credit card-scanning action, printing up four more tickets for The Avengers, smashing the dreams of the movie that honestly thinks it doesn't matter if you're not very good, as long as you have a lot of heart.

I'll give Crooked Arrows this: It's almost inspiring how much it's committed to its own moral. This is a movie that actually had to get itself a sponsor in order to play, just like a high school sports team. The name Reebok is on the poster! What a score for Reebok, too. Nike had Jordan, Adidas had Run DMC, and we've got BRANDON ROUTH! You kinda just want to to hug the movie and go "Oh, sweetie, it'll be okay."

Okay, enough mocking the movie for simply existing. The truth is, it's actually quite a fun and enjoyable film by Hallmark TV-movie standards, but those aren't the standards we're using, now, are they? The film follows Joe Logan (Routh), a half-Haudenosaunee Indian, former lacrosse prodigy, and current owner of the Offensive Stereotype Indian Casino. When Joe wants to expand his casino on his tribe's lands, the tribal council elects that they will allow him to, provided that he passes a "spirit quest" assigned by his father, Ben (Gil Birmingham, of Twilight fame, making him the most famous actor in the movie). Ben assigns Joe to coach the tribe's lacrosse team, with the assistance of his little sister Nadie (Chelsea Ricketts, who I really hope becomes a big star, like Gil Birmingham big). This is basically The Mighty Ducks without ice. Joe will, of course, lead them to victory while learning about himself, his tribe, and the power of REEBOK. 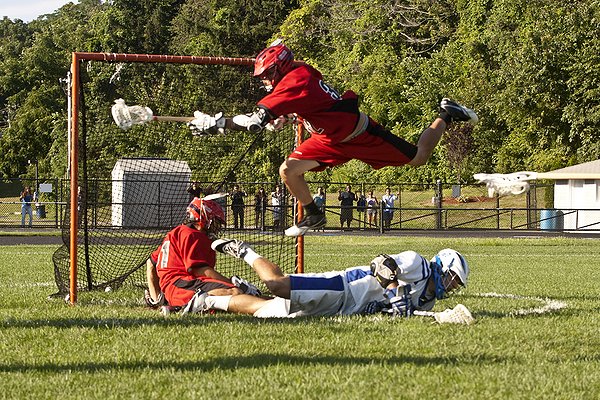 Lacrosse is really big in Ireland, so this film might do well there.

What follows is the series of cliches you've come to expect from sports movies, along with some very interesting information about the history of the Haudenosaunee/Iroquois nation that guarantee this film its position in seventh-grade classrooms during Native American Studies week. The film intercuts scenes of the boys playing in their field with clips of their ancestors running through the woods in their ridiculously bright REEBOK brand loincloths. The tribe itself helped produce the film, so this is very clearly a project that matters to some people.

Which brings me to the main point I want to make about this movie. There's a lot that can be criticized here, like the fact that it's so cheaply produced that you never really shake the feeling you're watching someone's home movies. (Which you basically are during the end credits.) However, the truth is that if the five movies we were running this week were Planeteers, Crooked Arrows would be Ma-Ti, it's got so much heart. That can carry a piece of art a long way. For all the teasing I'm giving him, Routh is acting like he's never acted before, mainly because he's never really acted before. In all honesty, I'd rather see a mediocre movie where the passion is apparent than a mediocre one where the cash-desire is apparent.

This is not a professional quality movie. There are ridiculously spliced stock footage Bald Eagles and, even worse, CGI eagles that could have come from a Playstation 1 game. Parts of it look like it was filmed on a Sony Handicam and edited with Windows Movie Maker. The music is... surprisingly pretty good. None of that is the point. If the movie had a larger budget and a large production company, that wouldn't make it any better. It would actually make it a little worse, because the cliches would still be there, but none of the sweetness would last. I'm about to make a statement that goes against everything I believe as a critic: Crooked Arrows is good for what it is. Unfortunately, "what it is" is a cheaply-made pastiche of better movies that no one is going to watch.