I have seen many horrific and saddening events in films. I have seen true loss and heartbreak. I have seen events in some films that would make most people bawl their eyes out, use up a full box of tissues, and be forced to leave the theater. I have seen all of these things, and I've never cried.

Sons of Cuba made me cry.

I've been struggling for the past few days to figure out what exactly I wanted to say about this film ever since it's world premiere on Thursday at the Full Frame Documentary Film Festival. It's safe to say that I enjoyed every minute of it. Sons of Cuba follows the journeys of three preteen males who are part of a prestigious boxing academy in Havana, Cuba: Cristian, Santos, and Junior. The students all have ridiculously regimented schedules, getting up at 4am, meticulously maintained meals and weight, and above all enormous pressures from both their coach, their families, and their government to becomes champions for Cuba. The students who make the cut go on to the national championships and compete for a trophy, one that was taken last year by a rival academy. Cristian, the undisputed star of the film, lost in the finals last year and is working hard to be victorious this year.

The film is richly shot, giving us a glimpse into the life at the school as well as the city of Havana. The genuine thoughts and emotions of the boys spill out onto the screen. They complain, innocently, that the biggest problem is getting up early or having to eat rice. We see them roughhousing. In reality, the coach is one of the few who is aware of the pressures put upon them by the entire Socialist nation to produce Olympic champions. He pushes the boys with a stern hand, but he occasionally lets through how much he truly loves them as sons. 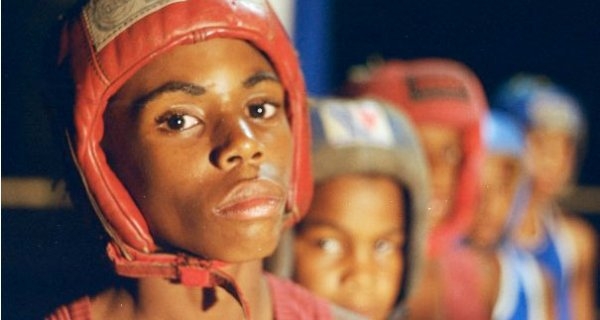 It seems Cuba has exactly five sons, all of whom sport very stylish headwear.

I had a long conversation with the editor of the film, Simon Rose, a day after the screening. He was eager to hear my opinion of the film. We had been discussing the difficulties in critiquing a documentary film. He realized that sometimes it can be difficult to separate the actions of the characters within the film from the actions of the director. If a director simply films what is a brilliant real-life story, is that a good documentary even if no real filmmaking skill was involved? Can a brilliant director take an awfully boring story and make a mesmerizing film? (I would argue yes) He thought that good documentary films should have a nuanced message to them, one that can be read between the lines and isn't used to beat the audience over the head mercilessly. I told him of the nuanced message I read in Sons of Cuba. In a Socialist country like Cuba, citizens are homogenized, and their glory is said to be only in reverence to the fatherland and not for themselves. Sons of Cuba, I told him, appeared to be about youths breaking free from that and attaining glory for themselves and their families. Simon appeared surprised at this revelation. He said that wasn't something they had intended, but it was always good to find new discoveries within your own films. He added that they had tried to remove most of the politics from the film and make it a story about the three boxers. I told him that must have been difficult, because Cuba appeared to be a politically charged environment. He didn't seem to agree. Our conversation ended at that point (not because we disagreed, but he had to catch a film), but I found myself surprised by his confession that they had tried to remove politics from the film. From my own observations, the film began with a reference to Castro's influence over Cuban citizens, and it ended with a note about his well-being. It was, quite literally, surrounded by politics. Perhaps removing the politics from the daily life of Cubans was more difficult than Simon thought.

Politics aside, this film is a champion of the human spirit, and a wonderful story of sportsmanship. Havana and it's rival trash talk each other throughout the film on the way to the championships, but it's all for the sake of competition. It's this love of the competition of boxing which is the heart of the message in Sons of Cuba. Cristian's father Luis, a former champion boxer, watches his son fight his way to the championships. After a match, he embraces his son. Tears swell on the eyes of the former champion and father. For the first time, he is truly proud of his son. For the first time, I found myself in a theater with tears in my eyes. Maybe it was connecting with my own issues of yearning for pride and acceptance from my father. Maybe it was just a great moment of documentary filmmaking.