Look No Further Than Looking For Eric.

In Ken Loach's Looking for Eric, Eric Bishop (Steve Evets) is a down-on-his-luck postman in Manchester, living with his two step-sons (from his second marriage) and struggling to come to terms with the poor choices of his past. When his daughter Sam is having her college finals, she needs her dad to look after her own baby. This means that Eric will be required to see his first wife Lily, with whom he is still madly in love. It is here that the film begins, with Eric driving the wrong way around a roundabout repeatedly until he has a head-on collision. At his lowest moment, he speaks to his posters of Eric Cantona, his idol, pleading for advice. Cantona himself appears from the ether and helps Eric put his life back together. 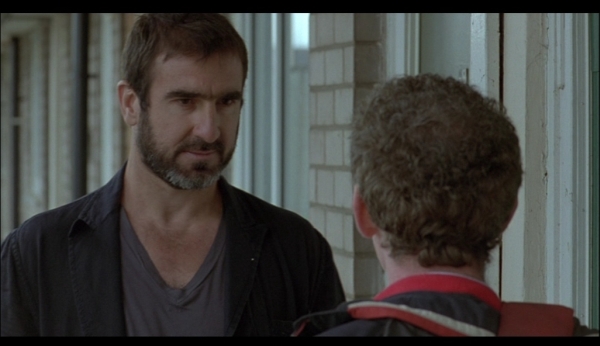 This man is my new idol. Bow down to Cantona!

It may sound like an oddly low-rent, British Pan's Labyrinth, but in truth it's a massively uplifting human drama tale with plenty of humour and honesty. It's this honesty that makes the film work so well. I'm from the north of England and these places and people are just like the places and people I see everyday. True "salt of the Earth" types, who wear their hearts on their sleeves. Emotionally honest men who could talk for hours about football, even though they can't afford to go to a match. The film presents itself as one of these men in a way, and it treats its audience the same way. Loach assumes that his audience understand human emotions and motivations, which is refreshing in the sea of brainless American blockbusters.

I don't know if it's just because I'm English, but I found myself immediately warming to this film and its cast of characters. You root for Eric Bishop every step of the way, even when we learn that almost all of his problems are born from his own mistakes. The introduction of ex-footballer/philosopher Eric Cantona as himself gives a bizarre twist to everything, he is treated as a legend, a kind of modern day Jesus Christ who can work miracles. However, most of the comedy in the film comes from his cod philosophy, with superb lines like "Without danger, we cannot get past danger"; "I am not a man, I am Cantona"; "He that sews thistles shall reap prickles" and so on. True wisdom for the ages. Add to this a superb scene in which he plays a trumpet tunelessly as children play football in a nearby playground is a perfect blend of comedy and poignancy.

I suppose you could call Looking For Eric a feel-good film. But one that isn't condescending or mawkish, the underlying message being that we can turn our lives around by making the most of what we have. We can't all be slumdog millionaires, but we can maybe smile once in a while. And let's not forget the universal truth that most problems can be solved by a trip to the pub with your mates.

And what mates Eric has, in Meatballs (John Henshaw) and the rest of the boys down the post office. Eric may be guided by the wisdom of Cantona, but it is through the help of his friends that he is able to better himself. It may not be a unique message, but the characters are so believable and relatable that it can't help but resonate.

All in all, Looking For Eric is a sublimely uplifting film and if you ever get the chance to see it, do not miss out. I also hope to see more of M. Cantona in the future, even if he is just doing his old cod philosophy schtick, I'm now officially a huge fan. And I hate football.