I knew this was going to be a special film right off. We're treated to silence, with only a clever rhyme about the three meanest farmers in town - then a build-up of banjo strums to the main title.

Wes Anderson is one of my favorite directors, not only because his works are "quirky" but because of the immense detail put into every aspect. Here, we get to see not only his first film adapted from another source, but also completely shifted in medium. I can't help but think of Fantastic Mr. Fox as an approximation of what could have been: Ladislaw Starewicz adapting Anderson's Bottle Rocket into animated feature. With animals, of course.

This manages to deconstruct many of the archetypes of the animated feature film. We have characters who are anthropomorphic animals, yet act like human beings. Most of the time. One great tweak is to have them break out all feral. Mr. Fox slashing apart his morning toast isn't just a gag, despite being hilarious. Perhaps some of the ridiculous schemes are a result of him... well, being a fox. True to form as in any Roald Dahl work, there's just enough violence. The scene with Fox and Kylie raiding Boggis' farm, for example. Kylie has trouble breaking a chicken's neck. Yeah, it's grim, but so what?

The visual style, as usual with anything with Anderson's name, is stunning. Rather than an array of candy colors and pastels, we're treated to earthy tones. Lots of orange, brown, and reds. I love how there's a heavy use of long mobile takes (which are RARE in any animation) and live-action styled framing. It's as fresh as what Nick Park did with The Wrong Trousers - forget it's stop-motion, but just film it as a regular movie. I can't imagine how long it took to set up that bravura shot of the two Foxes raiding the farm in the opening. There's some gorgeous shots, like the bit with Mr. and Mrs. Fox in the mineral cave. Big props to Tristian Oliver, who shot most of the Wallace & Gromit films.

The character designs are absolutely cute. Thankfully, they don't have the eeriness of Starewicz' work, but look more like the wonderful characters in the 1980s BBC The Wind in the Willows. There's a lot of closeups that show all this wonderful ruffling fur that most would consider an imperfection. They're cute. I'd love to know how they did some of the tricks, like Ash and Kris wet after swimming (Ash is even shivering!). Even better, the humans are consistently grotesque to the max. The three farmers look almost corpse-like. But one key of having comedic animation is to have it drawn or modeled funny. The use of "piss take" eyes (spirals, X's, asterisks) is so surreal, but it's funny. And even Kylie's "spiral eyes" lead up to a funny payoff. 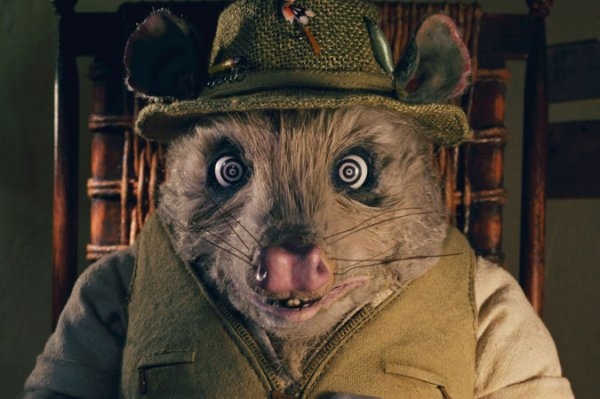 One great scene, among so many, is a hilarious swipe from Citizen Kane. Bean loses his temper after Fox & Co. steal EVERYTHING. He proceeds to completely demolish his trailer almost move-for-move as Orson Welles originally did. Then, his cider distiller acts as surrogate for a snow globe, complete with a shadowed closeup of his face. Instead of just being an elaborate gag, it actually moves along to the next part of the plot. There's a lot of other in-jokes, most notibly that the animal designs are inspirations right from Starewicz' 1930s stop-motion feature The Tale of the Fox. I'd love to see it end up as an extra on the eventual BluRay of this film. There's also a nod to Disney's 1970s Robin Hood (the song "Love" turns up on Fox's radio) and a great quotation from Rebel Without a Cause. There's plenty of Aardman styled sight gags, like the mini motorcycle and sidecar.

The opening banjo strums need returning to. Alexander Desplat provides a wonderful "folksy" soundtrack, intertwined with tunes from Burl Ives and The Beach Boys, plus a few bits from Georges Delerue's scores. Oh yeah, and we get a hilarious sendup of montage songs from Jarvis Cocker (as himself) that ends with a cigarette getting flicked at the said character. The opening raid set to "Heroes and Villians" couldn't be more aptly joined.

Celebrity voice casts get called out a lot, but you'll never see poorly cast actors in an Anderson film. George Clooney and Meryl Streep hit the tone flawlessly with their characters - Mr. and Mrs. Fox. They have the sophistication, but the manic attitude of wild animals. There's also the usual Anderson gang - Bill Murray, Owen Wilson, Jason Schwartzman... plus Anderson himself (as the weasel real estate agent) and his brother Eric as Kristofferson - one of the best parts in the film. Willem Dafoe is a psychotic rat (typecast much?), Michael Gambon as Bean, and a few surprises like director/writer Wallace Wolodarsky giving Kylie a wonderful voice. Even better, most of the dialogue was shot "on location" in fields or houses to give a more authentic tone to performances. In the production footage that exists, it certainly seems more relaxed - Clooney acted his parts unshaven and wearing a t-shirt and jeans.

I'm afraid that I haven't seen much animation this year besides this, 9, and Up... but I'm feeling safe in saying this is not only the best animated film of the year, but one of the best animated features - period. I hope the terrible box office draw doesn't keep Anderson from directing (or supervising) another animated film.

If you missed the theatrical run, don't hesitate the buy or rent this film. If you're a fan of Wes Anderson, you're going to love this. If you like animation, you'll love it. If you want to see cute furry animals set things on fire, this is made for you.