Oh, How Precious... Based on the Novel etc.

I don't think that 2009 was the best year we've seen in movies, but as with every year there are always a few films that leave an impression on me and one film that really stuck with me the most this year was Precious. Precious: Based on the Novel 'Push' by Sapphire is, as it's absurdly long title suggests, based on the novel Push which she had published in 1996. I liked the novel a lot and I was curious to see if director Lee Daniels would be able to preserve the novel's ability to carefully balance brutality and beauty, especially with its inspired cast consisting of Mo'Nique, Mariah Carey, Lenny Kravitz and newcomer Gabourey Sidibe. What I got was one of the most brutally honest stories about the struggle for dignity that I've seen in the longest time.

Precious follows the life of Claireece "Precious" Jones (Gabourey Sidibe), a sixteen year old black girl living in Harlem circa 1986. She's obese, pregnant with her second child (both of which her biological father conceived), is still in middle school and frequently finds herself the victim of abuse from her sadistic mother, Mary (Mo'Nique). Precious' life seems to be a slow train wreck, gradually deteriorating her sense of self worth until she has worn down to an emotionally broken welfare queen like her mother, but Precious is given a chance to make something of her life by means of a special school which is presided over by a one Ms. Rain (Paula Patton) who makes it her mission to help Precious rise up against the seemingly insurmountable odds against her. 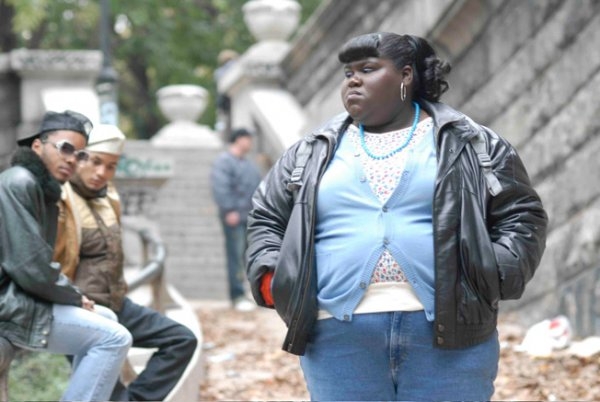 Finally! A movie about te true horrors of childhood obesity.

Precious sounds like a crushingly depressing melodrama in the vein of Requiem for a Dream and it is, indeed, quite a sad story, but in the end Precious is an optimistic tale about the struggle to find dignity in an world where everyone views you as being less than nothing. It's a brutal and savage journey that Precious takes and we follow her every horrific and heartbreaking step of the way, but even with things seem the darkest for her she finds the ability to achieve hope in even the smallest of places and the most seemingly insignificant of things.

Precious is also a brilliant character study. Precious herself is a victim of ignorance and it's fascinating to watch her struggle to understand the world around her even though she has little ability to comprehend it, and yet, she passionately years to be a part of that world where all the little things that we take for granted like being able to read and provide for our children are, to her, considered to be gifts of immeasurable value. Her mother, Mary, is also fascinating. Not is she just Precious' ultimate source of grief, but she is the ultimate victim of the culture of ignorance that thrives in Precious' world. She is morally bankrupt, selfish, hateful, manipulative and savagely violent. Every moment she's on the screen, torturing her only daughter, she not only fights to keeps Precious down, but servers as a grim reminder of what the future will hold for Precious if she allows herself to fail. Every performance in the film is great. Sidibe and Mo'Nique all deserve nominations (and wins in my opinion) for their bold and compelling performances. Even Mariah Carey and Lenny Kravitz manage to steal the spotlight in the few scenes they have. Casting these two popular musicians seems at first like a cheap ploy to attract an audience to see a film that director Lee Daniels believes they wouldn't normally go to, but lo and behold they both are surprisingly talented and fit into their roles extremely well.

Being the sucker for melodramas I went into Precious with high anticipations, but I was worried that it would struggle to find its audience, partially because it was financed by Tyler Perry, but also because of the fear that it would be labeled as a "black film" by audiences, meaning that it wouldn't have any appeal outside of black audiences, but that's not the kind of film Precious is. Precious is a remarkable humanist drama that is as brutal as it is glorious and a film that I feel effectively crosses all racial barriers.