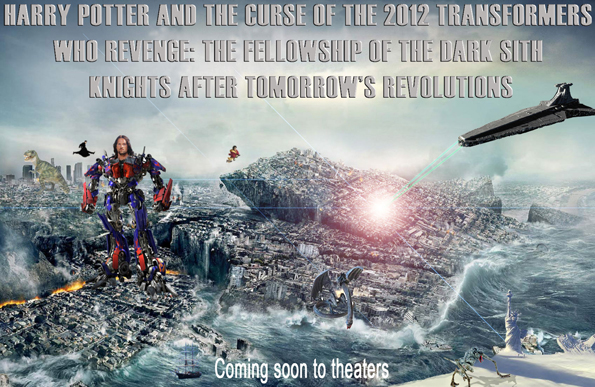 Coming soon: HARRY POTTER AND THE CURSE OF THE 2012 TRANSFORMERS WHO REVENGE: THE FELLOWSHIP OF THE DARK SITH KNIGHTS AFTER TOMORROW'S REVOLUTIONS

In the year 2012, the world is at a standstill. Economies are in ruins, the imperial guard controls most air traffic, and, worst of all, Harry Potter has to start his senior year at Hogwarts. He soon discovers that Hogwarts is nothing but a computer simulation run by transformers from another planet. Only Optimus "Aragorn" Prime can stop the evil from destroying the world. Together, Prime and Potter will traverse the ravaged wasteland of Los Angeles in the ancient pirate ship The Black Pearl. Along the way, they will encounter many dangerous creatures: The cybernetic Tyrannosaurus Rex, who has traveled into the future to protect the Staples Center from invaders; the duplicating Agent "Jack Sparrow" Smith, a pirate FBI agent; and also a mysterious monster from the deep that can only be viewed by handheld camera. Will they save the universe? Find out this summer.