Oscar bait and the FUUUTTTUUURRREEE of white people in cinema

When I look back at the Best Picture nominees from 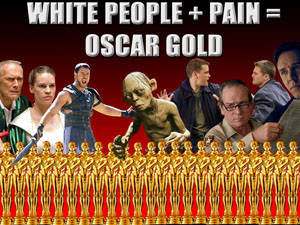 the past decade, it's apparent that most of them share a common sentiment: "Life sure does suck for white people." Granted, that's pretty much always been the case. Historically, the Academy has been dominated by stuffy white people declaring that movies about stuffy white people hitting a rough patch in their stuffy-white-people lives are the best.

In 2004, The Return of the King became the only fantasy film to ever win Best Picture, unless you count Around the World in 80 Days, which is about white people stuck in a balloon. Still, with all the overblown battle scenes and military babble, Lord of the Rings is basically one long war film, not much different from Braveheart or Gladiator. Add the triumphant story of two white kids wandering through a forest with the help of other white people, and you've got a recipe for success. 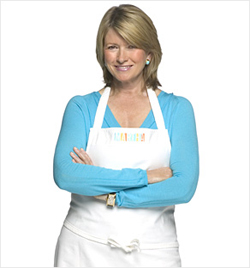 Had she not gone to jail, she probably wouldv'e won an Academy Award.Crash, a film about race relations, won Best Picture in 2006, beating out its fellow nominees, which were about gay relations, Jewish relations, The Red Scare and Truman Capote. The Academy apparently thought it progressive for Paul Haggis to cast Ludacris and Sandra Bullock in a film that, while not explicitly about white people, was designed to make white people feel better about themselves. After all, it's easy to sigh with relief as the credits roll and muse, "Well, at least I'm tolerant."

And then there's last year's winner, Slumdog Millionaire. It might have seemed edgy for the Academy to have picked this one in place of, say, The Reader. In reality, it's little more than a Frank Capra film as told by British Spielberg-wannabe Danny Boyle, who exploited Indians while telling the tale of exploited Indians. The movie all but retells the "I was born a poor, black child" story before awarding its young hero with a million dollars, which is a small consolation when you realize the actor playing said hero earned sweatshop wages.

The Academy usually tends to favor Nazis, gay people and 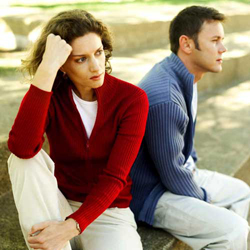 These people won an Academy Award without ever being in a film. famous people, but this year might be different. The only film that really fits any of these categories is Clint Eastwood's inexplicable Invictus, a rugby film about Nelson Mandela. Then there are the two conflicting tales of minorities rising above their lot in life, The Blind Side and Precious. The Academy loves to take one nominee and cancel it out with another, similar nominee. Look for that to be the case here.

This Oscar season, I think it's a safe bet that the Academy is going to make the safe bet. Best Picture will go to either Up in the Air or A Serious Man. There's nothing voters love more than George Clooney and the Coen Brothers, and both films could reasonably be subtitled "Life Sure Does Suck for White People".

This decade has had Best Picture winners about the plight of short white people, poor white people, white people in conflict with other races, and Russell Crowe (coincidentally, he's white), and I feel comfortable in predicting that this trend will continue. Look for the Academy of Motion Picture Arts and Sciences to officially change their name in 2014 to The Academy of Movies about White Fucking Weirdos.