EXPECTATIONS: What's there to say about this one? It's a Disney movie about kids going to the prom. I wouldn't rule out a song and dance number or two, some girl thinking she's an entitled MTV princess, and maybe 95% of the characters live happily ever after. If it's anything like my prom... Wait, no, I can't say that. If it were anything like my prom, then it would be about a bunch of nerds skipping out on the prom to see X-Men 2. That's probably not gonna happen. Actually, are we sure this isn't another goddamn High School Musical movie? Professor, what the hell have you gotten me into?

REALITY: In an amazing turn of events, most of what I expected out of Prom turned out to be false. Thankfully, there are no entitled MTV princesses and there is none of the Disney Channel's patented "over-exaggeration is comedy"-style acting, but that really doesn't help Prom rise above being a complete and utter cliche that has no idea how boring its own plot is. 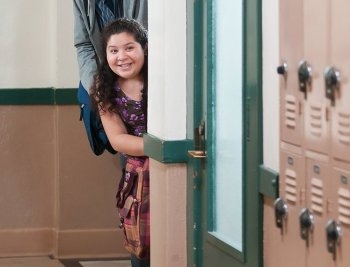 High school movie stereotype no. 6: She may be fat, but she sure is eager.Actually, there isn't much of a plot to this film. In its place is a series of vignettes about twenty different high school students in the three-week run up to the prom. Nova Prescott (Aimee Teegarden) is the class president responsible for rebuilding all the prom decorations after the captain of the lacrosse team accidentally burns them down. Helping her is Jesse Richter (Thomas McDonnell), the display model from the "Bad Boys with a Heart of Gold" outlet store. Will they fall in love? Won't they? Do you care? Also in the mix are a sophomore music nerd trying to figure out how to ask his lab partner to the prom; the perfect couple trying to figure out why one of them suddenly doesn't want to go to the prom; the hopeless romantic trying to figure out how to ask anyone to the prom; and a weird character named Rolo (Joe Adler) whose sole character trait is that he eats Rolos.

The most important thing of note in Prom is just how heavily the film deals in annoying high school stereotypes. I think I've spent so much of my movie-watching life ingesting satires and winking parodies of high school stereotypes that it's seriously kind of jarring to see a movie that deals in them so earnestly. There isn't so much as a wink to the camera or even a snide comment about high school stereotypes in this film. There's the jock and the shy loser and the over-achiever girl and the biker douchebag and even the weird guy who claims he has a Canadian girlfriend. These characters are so transparently torn from the pages of Teen Stereotypes for Dummies that I honestly can't believe that they even exist. As soon as a character enters the film, you know exactly how their story is going to end. No twists, no surprises, nothing interesting.

Somehow, the most interesting couple in the film isn't even a couple. They show zero potential of ever being a couple, and really only exist in the film to provide comic relief. Despite all that, they have more romantic chemistry than anyone else in the film. This running thread is proof enough that something went horribly wrong in the writing of this script. How can a film highlight the chemistry between two characters so strongly without ever bothering to develop them? It's not unusual for supporting characters to become the most interesting characters, but when the two leads are so utterly devoid of anything interesting, it becomes sort of depressing when the only interesting people are shoved to the periphery. These filmmakers must have gone to the Twilight Academy of Ignoring Interesting Characters. 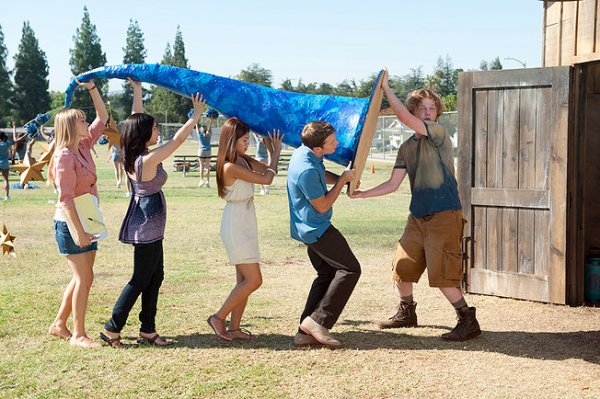 High school movie cliche no. 14: Must promote team spirit at all costs!

Despite being titled Prom, and ostensibly being all about high-schoolers at the prom, the film devotes very little screen time to the actual dance. That's like if Batman Begins ended with Bruce Wayne getting his first shipment of bat-cowls. Fair's fair, I guess. Nobody wants to see a movie called Fifty People Getting Ready For the Prom. Then again, I didn't think anyone would want to see a movie called Prom, so what do I know?

Also, with a title like that, you'd think there'd be a healthy dose of dancing and pop music and all that junk, right? You'd be wrong. The prom itself makes up the last 5 or so minutes of the film, and hardly anyone dances. Most people just stand around watching the various plots resolve themselves. By some bizarre twist of fate, there is more dancing in the opening credits of Super than there is in the entire running time of Prom. How the hell does that work? Even the most low-budget of superhero movies can scrape together a scene of cartoon characters dancing, but a movie about high school caricatures going to a dance can't spare 5 minutes of thumping bass and sweet beats?

If I cared about pop music and dancing, I would probably be offended. As it is, I'm mostly just amused that a violent, depressing superhero film from a former Troma employee has more choreographed dancing than a Disney movie about kids going to the prom. Somebody dropped the ball here, and it seems nobody bothered picking it back up.