EXPECTATIONS: We have a fun game we like to play around the Current Releases office called "British Time!" Here's how it goes:

I turn to Jay Dub across the desk and say something like "Oi, Joseph. You're a wanker, you are."

He'll respond with something like "You manky git! Wot you saying, guv'nuh?"

To which he replies: "Quite right, chum. Let's settle this over tea and crumpets, what what?"

The loser is the first one who makes Professor Clumsy storm out of his office and yell "WE DON'T BLOODY TALK LIKE THAT!" He is then forced to watch something insanely British. Thankfully, there were no Danny Dyer movies released this week. 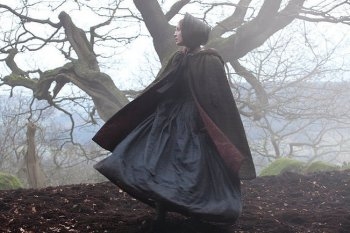 What is this? Red Riding Hood? We already reviewed that film.REALITY: Let's go ahead and clear this up. As an English major, I have seen roughly 78 different adaptations of Jane Eyre, which is about 13% of those that exist. What could this new one possibly bring to the table? Well, there's nerd-cred-earner Michael Fassbender playing leading man Rochester. Big deal, 1983's TV mini-series had Timothy Dalton. Well, how about the classiness of being produced by BBC films? Nah, 2006, Masterpiece Theatre, sucka. Non-English director offering international perspective? 1996, Director Franco Zeffirelli! Face it, this horse is dead. There's not much you can actually do with the work of Charlotte "The Hot" Bronte. I mean, I guess you could actually just tell the story the way it's written in the book, but who does that?

Well, apparently director Cary Fukunaga does. Jane Eyre '11 is insanely true to its source material, which is both a help and a hindrance. It lifts dialogue directly from the novel, because why try to improve on what's obviously worked for a long, long time? It also borrows the novel's pacing, which is a mistake, because it's okay for a 19th century novel to have long stretches where nothing happens, but not for a 2011 film. Normally this is where I describe the plot, but I'm not going to bother because if you don't know what Jane Eyre is about, you're not going to enjoy this movie. (You probably won't actually see this movie. Get some culture.) If you do know and love the novel with the intense fiery passion of the girl in the back of the Honors Senior English class, then this movie is made for you.

The strength of the film is its cast. Michael Fassbender and Mia Wasikowska are some of the best performers of the two lead roles who have ever been seen on screen. Fassbender in particular brings a smoldering bitterness and anger to the role, making him possibly the best Rochester on the screen since Orson Welles. I'd also like to recognize that, while Wasikowska is a fantastic actress who is actually very pretty, the film goes out of its way to make her look plain and average, the way everyone in the book and all movies constantly describe her. This is noteworthy because most adaptations of the novel seem to think it's a good idea to have Jane be pretty damn fine, wandering around Thornfield Hall going "Oh, Mr. Rochester, I've been a naughty, naughty governess. I'm supposed to teach that little French girl something, but I forgot the language. Mr. Rochester, will you teach me how to French?" while everyone else says things like "My, that Jane Eyre sure is plain and non-sexual, eh? Why, she doesn't have an ample bosom or full, pouty lips at all, poor thing." 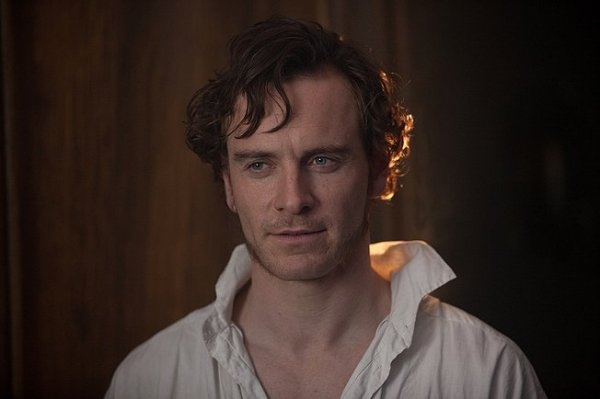 I think the phrase is "oozing". He's "oozing" manliness. Better get a mop.

So we've established that the leads are great. Fine, put them in a play, I'll watch it. (No, I won't.) The issue is, sure, every time Jane and Rochester are on screen together, it's amazing. But if we're dogmatically following the book, that means there's a lot of time where that doesn't happen, which means there's a lot of time where nothing happens. The attempt to focus on the darker, more gothic element of the novel falls short, because rather than actually show us anything creepy happening, Fukunaga seems content to show us a bunch of people standing around talking about how creepy whatever just happened was. It's a slow, tedious ride, and it leaves the non-lit majors screaming "GET TO THE BITCH IN THE ATTIC ALREADY." (This book is 150 years old. I am not giving you spoiler alerts.)

Of course, when we do get to the woman in the attic, it's somewhat glossed over. Because Fukunaga made the interesting decision to tell the story in flashbacks, we've already seen Jane's reaction, so I was hoping to see a little more of the scene that provoked it. We spent a great deal of the first act establishing that "Jane is sad," and about two minutes toward the end showing why. It's a fairly minor complaint, but there's really not much else going on here. The amount you will enjoy Jane Eyre depends entirely on how much you like Jane Eyre.

In this regard, adapting a novel like Jane Eyre is not unlike adapting a comic book like Green Lantern. Occasionally, it's nice to see something done exclusively for the fans. (Also, Jane can create laser beams from her mind.) No one's going to walk out of the theater saying "I really want to read that." People will walk out of the theater saying "Oh my god, that was amazing, they hit every detail and he was such a great Rochester oh my god" while I wonder whether or not I want there to be a second date with them.