EXPECTATIONS: You know what? I don't have any. I wasn't even really aware of this film's existence until a few days ago. Unlike, say, Winter's Bone, there's no indie-circuit buzz, no awards, no "early Oscar" gibberish spouting from the blogs. Hell, I think I'm barely aware of the plot. It involves wrestling, or something. All I know is that this seems to be Paul Giamatti's latest attempt in his long-standing effort to become the best actor who appears in movies no one ever watches.

REALITY: Someone needs to give Paul Giamatti a hug. Just in general. Paul look like he'd give awesome hugs. However, in Win Win, his performance as desperate working family man Mike Flaherty is so endearing, you just want to tell him "Everything's gonna be alright, buddy. No one even remembers Big Fat Liar." Then we'd go out for drinks and be best buddies and he'd hook me up with a walk-on role in Shoot-Em-Up 2: The Shootenin.' And my life would be complete. Sigh... 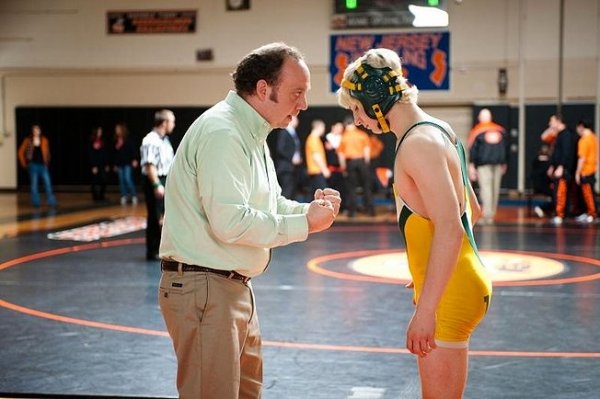 Giamatti need only state the key phrase to activate his android wrestle-bot 9000 and win the tournament.

Win Win features Giamatti as a private practice lawyer in a slow time, struggling to keep his business going. Mike coaches a failing high school wrestling team, suffers from panic attacks, and with the exception of his loving wife (Amy Ryan), close friends (Jeffery Tambor and Bobby Cannavale), and adorable family, he really doesn't have much going for him. To avoid telling said loving wife of his financial difficulties, Mike makes a bad decision and becomes the legal guardian of one of his elderly clients named Leo (Burt "Ironic Last Name" Young) so that he can receive the monthly stipend. In an amazingly timed coincidence, Leo's runaway teenage grandson Kyle (Alex Shaffer) shows up to live with him right as Mike puts him in a home. Stuck in this position, Mike takes Kyle in and discovers, surprise surprise, that he's a damn amazing wrestler.

Okay, so Win Win isn't winning any points for originality. That doesn't matter. The fact is, neither does life. Director Thomas McCarthy seems to be building a reputation on telling basic, realistic human stories, and Win Win is no exception. It's really to Giamatti's credit that Mike is a sympathetic, likable guy even though he starts the film doing something highly immoral. This character could have come across as a huge douchebag, and the same goes for Cannavale's portrayal of Terry, Mike's best friend. Here we have a guy who is self-centered, pushy, and spends way too much time outside of his ex-wife's house, and he's the comic relief of the story.

Nothing in this film should work, but somehow it all does, and I can't really explain it. Unfortunately, that's kind of my job, so here goes: I should be angry that Kyle has movie-new-kid syndrome, where everyone automatically loves him at his new school, but it works because they all have a reason to. I should be mad at the product placement that occurs when Mike and Terry stop their conversation to talk about Terry's new Wii, but by just casually tossing it into conversation, it actually seems very natural and real. I shouldn't like Shaffer's flat, monotone delivery of all of Kyle's lines, but I love it because that's what a teenage boy sounds like. This is mainly because Shaffer isn't actually an actor: he is in real life, a former high school wrestling champ. THAT'S how committed this film is to realism.

The film obviously takes a lot of its influence from recent feel-good indie films, most obviously Little Miss Sunshine. I was going to say here that Win Win is almost, but not quite as good as Little Miss Sunshine, because Shaffer was not quite as good as Paul Dano. However, given that only one of those guys actually acts for a living, I'm giving Shaffer the handicap points on this one. 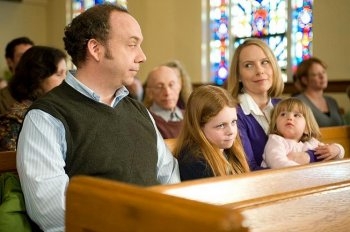 Later, in court, Giamatti gives a knowing glance to his family before activating the remote control on his deadly wrestle-bot 9000.It's because the film is so warm and human that the occasional misstep is so noticeable. Mike (and by extension, the audience) assumes that Kyle is a troubled kid because... he's quiet? He has stupid hair? At one point it's revealed that Kyle has several non-threatening tattoos, including one of the state of Ohio. Now, the character is from Ohio, so it's not like there's no reason for it, but who thought that would be a good way to make the character look tough?

Of course, when revealing that Kyle is actually a good kid, the film has the exact opposite problem. He's absolutely too nice at times, which isn't necessarily a bad thing. Despite what my grandmother says, actual good teenagers exist in the world, but it makes for a shift in tone that, when Kyle is faced with something that really angers him, feel slightly off. Even a hint at a dark side might soften the blow a little. For a brief time in the third act, the movie hits the drama pedal real hard, real fast then pulls back. It's a little jarring, but not so much that it hurts the pacing at all. I'll be the first to admit I'm grasping for things to complain about here, and that's a good thing. When a film is this good, sometimes I have to harp on the few things that are less-than-great.

Win Win is a simple, funny story about what it's like to lose control over your life. We love these characters because of their massive imperfections. When Amy Ryan, who is the perfect movie mom, says "I Love You," it hits. When given the opportunity to launch into a sickening last-minute desperate courthouse speech a la Jimmy Stewart, it politely declines, and I thank the film for that. It's too good for that kind of ending. As a result, the film has kind of an anti-climax. If that's a problem, just remember, you're watching a movie about people, not movie characters.

Now if you'll excuse me, I have to contact my lawyer about this restraining order from the desk of one Mr. P. Giamatti.

MINORITY REPORT: Paul Giamatti be damned! There is only one man who gives perfect, exemplary hugs and that is Monty Smythe. Why is that, you ask? Because Monty Smythe has four arms! I acquired the additional pair during a visit to the local pub, wherein a young gentleman thought it amusing to mock my admittedly disheveled visage. I assure you, the disappearance of his arms and appearance of my new ones were entirely unrelated. - Montague "Legally Sane" Smythe