EXPECTATIONS: Now that the superhero genre is officially a thing, the superhero satire sub-genre has taken root. Seems like every year we get five movies about superheros and one film about regular jerks pretending to be superheros. Last year, that film was Kick-Ass. This year, The Green Hornet aside, it's James Gunn's Super. I'm expecting a film every bit as warped and scathing in its world view as Gunn's previous film, the vastly underrated Slither. At any rate, it ought to be fun seeing Rainn Wilson break out of his character from The Office and wail on some dudes with a wrench for ninety minutes.

REALITY: It's easy to see how this film got a greenlight. Superhero movies are big these days, so every Tom, Dick and Harry with a script is getting at least a couple million to go out and make their own. Thing is, most of these films aren't really saying anything. The good guy kicks the bad guy's ass and everyone goes home happy. Except the bad guy. But then there's Super, a film more disturbed and angry than I think even its director is willing to admit. 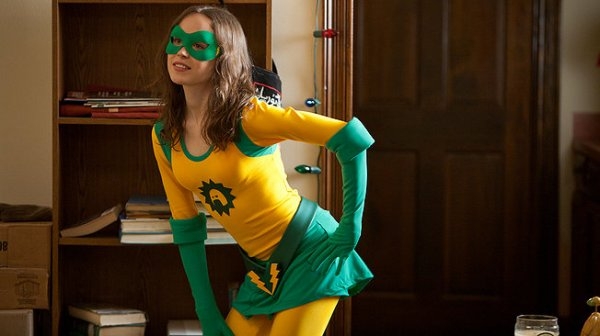 The movie opens as mild-mannered Frank D'arbo (Rainn Wilson) discovers that his wife (Liv Tyler) has either left him for a drug dealer named Jacques (Kevin Bacon), or has been kidnapped by a drug dealer named Jacques. He isn't sure which it is. In a fit of despair Frank prays for an answer, and after dreaming about being tentacle-raped by the Holy Spirit, Frank decides to don a costume and fight crime as The Crimson Bolt. He quickly makes a name for himself pummeling petty criminals with a pipe wrench and screaming "Shut up, Crime!" in their faces, and soon recruits a sidekick. Together with Boltie (Ellen Page), a psychotic girl who works in a comic book store, Frank sets out to rescue his wife from Jacques' drug dealer compound.

Much like last year's Kick-Ass, Super straddles the line between comic book parody and genuine action fantasy. Where the two films differ, however, is that Super also injects a healthy dose of revenge thriller into its plot. Where Kick-Ass was all about young people fantasizing about being heroic, Super is more about a jilted husband working through his abandonment issues with a mask and a pipe wrench.

This makes for quite the bipolar film because remember, I said this was also a comedy. Or at least it thinks it is. Much of the humor in the film comes from Frank slowly figuring out what it takes for him to become a hero. You can't just walk up to a guy dealing drugs on a crowded street and start pummeling him to death. Well, you could, but you'd probably get the attention of the actual police. Instead, Frank takes his crimefighting cues from a superhero on a Christian TV show (played by nerd favorite Nathan Fillion).

In fact, perhaps a better comparison for Super would be to say that the film exists somewhere between Taxi Driver and Observe and Report. The moments of brutal yet gawky crimefighting are fun and amusing on their own (when not out-and-out violent as hell), yet it acknowledges the fact that going any further would send Frank on a killing spree. On the spectrum between revenge fantasy and the parody of a revenge fantasy, this film seems to land square in the middle. 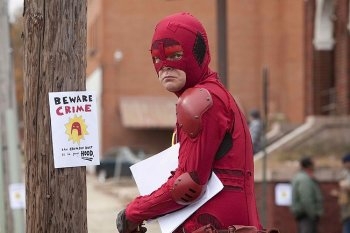 I'm not sure if he's telling us to beware of crime or if he's telling the abstract notion of crime itself to beware.As much as this is meant to be a satire of the superhero genre and show just what these kinds of heroics really do to people, I get the feeling that the film also represents writer/director James Gunn exorcising some of his own demons. I doubt it's any accident that Gunn's first film after getting divorced from The Office's Jenna Fischer is about a desperate man trying to get his wife back. Then again, it could just be one of his odd hangups, considering his other film Slither, which is itself weirdly obsessed with failing marriages.

Whatever the case, Gunn takes that material and weaves it into a film that's equal parts endearing, psychotic, and more than a little depressing. It's hard knowing what to feel in certain scenes, particularly when Frank is sobbing on the floor one minute, then the next he's jumping muggers in broad daylight. I blame the script, mostly. It's trying to juggle so much at once that it can't seem to focus on one direction.

You can't fault Rainn Wilson. He makes the most of his character, and he manages to carry the film without much trouble. When he's not busy trying to throw himself across the screen, he gives a genuinely earnest performance. The same really can't be said of Ellen Page, though. As manic and silly as her character is, Page simply comes off like she's trying way too hard. She's the pixie dreamgirl stereotype cranked up to 11 and given a handgun.

In some ways, the film feels a day late and a dollar short. The whole "real-life superhero" thing has been done to death at this point. Some guy decides to put on a costume and beat up criminals, and then winds up going up against a crime boss (Hell, that's even the plot of the fucking Daredevil movie). Why is it always crime bosses? Are they just the easy, go-to bad guys? Why not terrorists or sex traffickers or some real, tangible threat? It always seems to be generic, boring-ass "crime bosses."

For as much fun as the film is when it works, there's just a general feeling of blandness. Not in the sense that the movie looks bland, but rather what's going on feels like we've seen this all before. Super might have been great five or ten years ago, but because it waited so long to get off the ground, Gunn's film ultimately feels kind of trite. It does have its moments, and the big finale definitely pays off, but in getting there we have to slog through a lot of emotional baggage. It might be worth it at home, where you can fast-forward through all the whining and crying and focus on the action and comedy. Watching Super in the theater is sort of like sitting in on a giant's therapy session.

MINORITY REPORT: But could he kick Thor's arse? That's what all the nerds want to know. That's all they really care about. Film quality these days is not based on the actual power of the narrative and messages, but purely on the ability of the main character to beat down the main characters of similar films. Seems to me that Super doesn't stand much of a chance there. - Ian "ProfessorClumsy" Maddison