EXPECTATIONS: People love playing with movie-naming conventions in long-running genre franchises these days. Just look at Rambo or Live Free and Die Hard. The best example by far, though, has to be the sequels to The Fast and the Furious. The first sequel was 2 Fast 2 Furious, which is ridiculous, then we have Fast and the Furious: Tokyo Drift, which makes more sense as it maintained the use of words over numbers. It got really silly with the forth film in the series (simply titled Fast and Furious) and now, finally, we have Fast Five. That doesn't even sound like a sequel, it sounds like a comic book about five people who can run really fast. 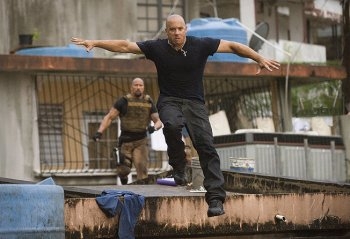 Amazing that these gigantic men can carry their bulk with enough agility to jump across rooftops. Must be something about the added aerodynamics of baldness.REALITY: Fast Five is the perfect argument against the old "They don't make 'em like they used to!" cliché. Here we see what we've always wanted from and enjoyed in real action films; tough guys fighting, behaving subtly homoerotically and causing millions of dollars of property damage in the name of entertainment.

The plot is appropriately simple: Dom Toretto (Vin Diesel) is rescued from police custody by his friend and former cop Brian O'Connor (Paul Walker). Dom then goes into hiding, prompting O'Connor and his pregnant girlfriend - who is also Dom's sister - Mia (Jordana Brewster) to go to Rio de Janeiro in search of illegal employment. They get a job stealing some cars from a train, only to be double-crossed by local crime lord Reyes (Joaquim de Almeida). Now they're out for revenge, but Federal Agent Hobbs (Dwayne "The Rock" Johnson) is hot on their trail.

I'm no car enthusiast. I mean, I go crazy for the Formula 1 and I never miss Top Gear, but I couldn't explain how a car works; some form of witchcraft, I presume. Car fetishists will surely get a huge kick out of the various multi-coloured supercars on display here, even moreso than I did. There are several scenes of racing, chasing, and other car-related words that don't rhyme, and a lot of this stuff plays very well; a quarter-mile drag race between four stolen police cars is much more exciting (and a lot longer) than it has any right to be.

On the other hand, the drivers themselves are mostly uninteresting. Dom and O'Connor form a team of super-criminals, you see, and they all have special abilities like... being present... doing the stuff... and... all that. Yeah, the gang's members have interchangeable personalities and their supposed special abilities really don't come into play. There's even an attempt to stir up some romance between two of them and the actors do their best to make it work. In fact, you can't blame the actors for any of these characters' shortcomings. It's just a sheer lack of interesting material here for them to work with. 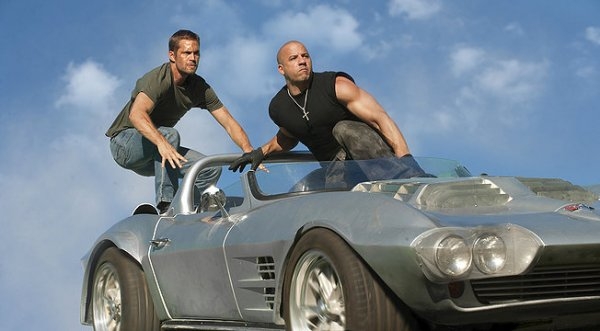 I know you plan on jumping, I'm just not sure were you expect to land. You're literally in the sky right now.

There is some interesting stuff going on, namely a kind of bizarre understanding between Dom and Elena (Elsa Pataky), a Rio-based police officer assisting Hobbs, based on the fact that they both pursue their goals from the motivation of having lost a loved one. It sounds hoaky, but it's fairly well executed. The problem is that it just doesn't belong here. This film is approximately twenty to thirty minutes too long, and this sub-plot probably should have been the first thing to hit the cutting room floor. All this filler just gets in the way of the real meat of the film, the action!

Early shots of the city of Rio gave me that eerie, sinking feeling that I'd seen it all before and it really didn't go so well last time. However, by the time a foot chase on the rooftops of Rio's slums starts launching itself at you, all memories of that animated monstrosity are cast aside. You can understand my initial misgivings subsiding upon the realisation that Vin Diesel, in the middle of jumping from one building to another, looks over his shoulder whilst in the air to see The Rock smash effortlessly through a wall in pursuit of him.

Incredibly, this all comes together in one of the most exhilarating action climaxes in recent memory. Two cars dragging a bank vault through the streets of Rio, destroying cars and buildings, with real stunts and explosions and the absolute minimum of visual effects. This is more like it! To hell with Thor and his lightning bolts, I want to see a climactic chase sequence and wonder how the hell they ever pulled it off. I want to see Vin Diesel and The Rock kick each other's arses! I want to see proof that sometimes they really do still make them like they used to and here it is!

MINORITY REPORT: There's this thing that happens with franchises that somehow stay popular after three or four films where I'll look at them and say "Wow, this thing is still going strong. Maybe I oughta see what all the fuss is about." And then I wait for a boxset to come out so I can shotgun the entire series in a weekend. And then when it finally comes out, I look at it and go "Wow, that's a lot of money. Maybe I won't." And then I never do.

This is one of those franchises. - Joseph "Jay Dub" Wade