EXPECTATIONS: Stephen Soderbergh is one of those directors who likes to stretch himself across all the genres. Now he's trying his hand at a balls-to-the-walls action film with MMA champion Gina Carano in the lead and a whole bunch of handsome movie stars in supporting roles. Other than that, I don't really know an awful lot about this film.

REALITY: Haywire is kind of a rare beast in that it is trying to be a character-driven action film. The only problem is that instead of building on that character in any significant way, they simply build an overly convoluted plot around her and hope we'll be compelled. Unfortunately, Haywire is lacking in substance. 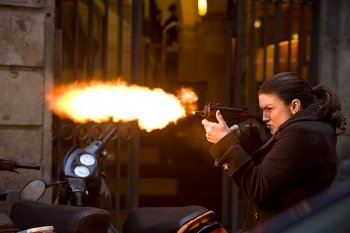 Probably not the best idea to be doing that in public.After a meeting in a diner between mercenaries Mallory Kane (Carano) and Aaron (Channing Tatum) goes awry, Mallory carjacks young Scott (Michael Angarano) and proceeds to tell him about every detail that led up to this event. She tells of her time in Barcelona, on a job set up by her employer and former boyfriend Kenneth (Ewan McGregor), government agent Coblenz (Michael Douglas) and the mysterious Rodrigo (Antonio Banderas). She tells of how what was meant to be a rescue mission turns out to be something much more sinister as she learned in Dublin with Mi6 agent Paul (Michael Fassbender). When she's done telling the story, she resolves things with the help of her dad (Bill Paxton).

That's just the basic outline. The real plot involves a lot of twists and turns and some political agendas that really don't need to be there. For how light and small everything in the film feels, it's odd that they felt the need to fill the space with plot rather than character development, especially with how obvious it is that the characters are fully developed on paper. I would have loved more scenes of Mallory and her dad or some more intimacy between her and Kenneth or Aaron. Instead we get a scene where Michael Douglas explains everything in an aircraft hangar while actual tumbleweeds roll by.

There's an oddly proud sense of self-awareness to the whole thing too. At one point Mallory stops her recanting to make sure the audience is keeping up, demanding that Scott recite the names of all the main characters back to her. There are moments of humanity peppered throughout, but they are all overshadowed by this insane desire to advance the plot at all costs. 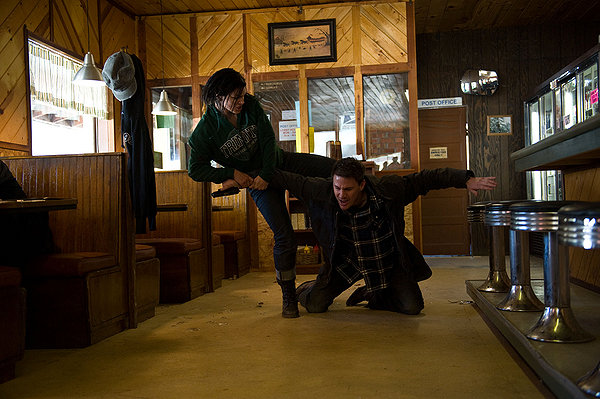 We've all been wanting to do this to Channing Tatum for years.

I know people like a lot of plot, or they say they do, but I think people sometimes confuse plot with substance. We don't need a lot of plot, because this is the result. Instead, we crave substance in our films. This film chooses to lay its substance in a visual narrative that resembles a comic book more than any comic book film that has been released in recent years, both in structure and style. With these characters and their relationships, you will find yourself demanding more intimacy, more warmth, but Haywire never delivers.

While it is boring where it should be personal, it at least manages to be exciting where it should be exciting. The action scenes are all visceral and thrilling. A footchase through the streets and rooftops of Dublin gives a brilliant sense of place regardless of where you might live and brings the whole scenario closer to home. The fights are brutal and often unexpected, performed with a vicious fervor by skilled martial artist Carano. 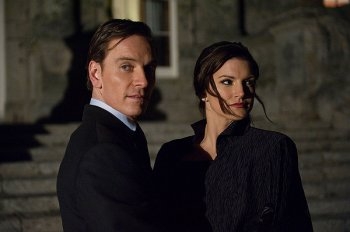 I like to pretend Fassbender is playing a descendant of his character in Inglourious Basterds.A lot of what makes the film work lies in the characterisation of Mallory. While most action films with female protagonists would choose to either masculinise their leads or fetishise their abilities, this film treats its star with respect. Mallory is unbeatable and tough without ever losing her femininity. When offered to chance to engage with a typical James Bond type, she rejects the idea of wearing a dress or being "eye candy," not because she looks down on those things, but because she isn't suited to it. She is physically imposing, but remains a woman throughout.

Gina Carano is an interesting revelation in herself. She is very physically capable and makes mincemeat out of her enemies, but as an actress she isn't especially charismatic or compelling. Perhaps this is why Soderbergh chose to surround her with star power. McGregor is the weak link, failing once again to deliver a convincing accent. Fassbender steals the entire film with his brief appearance, but his character is given a bizarre twist with his accent that doesn't do anything for the film. Everyone else is as entertaining as you'd expect from them, except Channing Tatum, who is moreso.

Haywire really isn't going to set the world on fire. They could have done so much more with the idea, but we'll never see that. Instead we have this cold, overly plotted science experiment that will capture very few imaginations.

MINORITY REPORT: Seems like every time they make another 'assassin on the run' film, someone else decides to change it up a bit. "Hanna had a young girl, let's make her an adult!" Next year, we'll all be talking about Lars von Trier's Sleeper Cell starring Betty White. - Joseph "Jay Dub" Wade